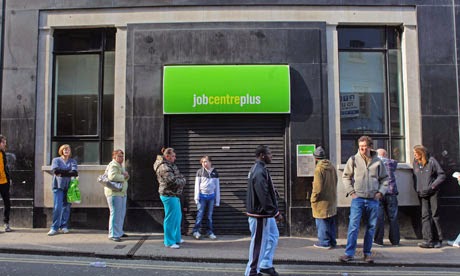 I have been contacted by somebody who works at a Jobcentre Plus outlet who has told me a shocking story about his duties. Many years ago when I had just left school and was looking for work, Jobcentres were run by the Employment Service and were quite relaxed places with shelves full of cards and helpful, friendly advisors. If you needed to apply for benefits it was dealt with by an entirely separate office, run by the Department of Social Security and you had to go to another location to apply. It was in 2002 that the two services were amalgamated along with the establishment of the Department of Work and Pensions; from that day onwards job seeking and benefits became inextricably linked. Luckily I've never needed to use a modern Jobcentre Plus; I was in Hospital Portering from 1989 until 2012 when I went straight from that into my new job, self-employed gardening and house cleaning. However I've been into a branch to keep somebody else company. JCP's are tense and intimidating places; frightened people queue up in the entrance and are watched over by rough-looking security guards. The "advisors" are abrupt and acidic in their treatment of their "customers".
I've spoken a lot about unemployment in the past, see here for background: http://hpanwo-voice.blogspot.co.uk/2014/04/uniforms-for-unemployed.html.
And: http://hpanwo-voice.blogspot.co.uk/2013/09/tory-boy-wants-more-slaves.html.

I'll call the person who contacted me "Terry". Terry is a JCP advisor and he told me that he joined the service many years ago because he wanted to help people, but the entire objective of the JCP and the benefits system has changed. He no longer helps people, he polices people. Like all public services the JCP has performance targets and these used to be based on helping unemployed people find work; today the goal is to disqualify as many people from receiving benefits as possible. This process goes by the Orwellian euphemism: sanction. Advisors are required to sanction at least 2% of their case load each month; if they fail to do so they are given a bad report and can be sacked from their own jobs. Advisors with the highest sanction rates are rewarded with a bonus payments. Staff target vulnerable people like those who can't speak very good English and those with learning difficulties. More recently, advisors have been given instructions to agitate customers as much as possible by robust interviews and excessive intrusive questioning. The hope is that the customer will be so upset that they will close their claim. Agitation can take many forms; for example, excessive requirement to attend the office, mandatory "work experience", which I've discussed in the links above. Also classroom based information sessions. Some advisers will even give their customers fraudulent referrals. Terry says that these changes came about when David Cameron's Tory government was elected and he urges people to vote them out off office as quickly as possible. Personally I wonder if a Labour government would be any better these days. Terry does not want to identify himself because he's worried about losing his own job. I don't think we should judge him in that respect; he knows better than anybody how awful it is to be out of work today. Let's just be grateful to him for contacting me. At the moment it's hard to prove what he says because a lot of these policies are unofficial and there's little official paperwork attached to them. However I've sent the following letter to the Department of Work and Pensions' press office. Their email is on their very glossy and cuddly website: https://www.gov.uk/government/organisations/department-for-work-pensions. I'll let you know if I get a reply:

Dear DWP
I have been contacted by an anonymous person who says that they work at a branch of Job Centre Plus. They have made some disturbing allegations about service practices at their office. This includes the improper sanctioning of customers' benefits, fraudulent job referrals, the bullying and intimidating of customers to persuade them to cancel their claims, and the bribing of staff members with bonuses for the highest sanction rates on their case load.
Would you like to comment?
Yours faithfully
Ben Emlyn-Jones-
Hospital Porters Against the Order
Posted by Ben Emlyn-Jones at 20:58

Commendable work Ben. I recently visited a JCP in between jobs last year I I can validate the practices discussed, this demoralizing psychological pressure system is what I experianced. When I came across with my experience and intelligence (no ego intended here) they were very confrontational, they were not interested in what I had to offer only to fit me into a retrogressive framework. As I had no address at the time I was told I would need to sign on everyday! regardless of travel expenses, this was surely to make me give up claiming. Unemployment figures are released as they shift large numbers of people onto third party training coarses and work experience. A friend of mines stepson was sent to work somewhere for no pay but with an offer of work from the company which never happened. It is all smoke and mirrors and bullying. I also think Labor would have no difference in approach, there is no politics only the Global Commerce Modal and NWO Social engineering-trans humanism. Exposure is key and no judgement should be passed to the guy who wrote to you. We are forced into corners in the workplace thesedays, people are scared to loose their jobs for they know exactly what s**t they will have to go through in the JCP. FOR ME I WOULD FIND MORE DIGNITY IN BEING HOMELESS, WHICH IS WHAT I TRULY INTENDED TO DO RATHER THAN BE DEGRADATED BY THE SYSTEM. It comes to something when working does not pay let alone the smoke and mirrors benefit system. I feel for the poor wretches out there cast to the wayside. Smash the class system.....

Cheers, X. Oh dear, X. I hope you've got a real job now. Sorry to hear you went through that experience. Being unemployed has become a crime and they are an underclass that is being used to justify the NWO, see the background links in the article. Maybe this is the source for the zombie symbolism I've been studying. I agree, if Labour were in office it would be exactly the same. The solutions to this have to be more drastic than "Terry" suggests, much as I admire the bloke for coming forward.

As someone who claimed JSA under the previous government (2005/2006), I can say that the schemes which are now causing a small amount of fuss (unpaid, mandatory 'voluntary' work for ASDA and alike) were already in place back then.

What HAS changed is that it's no longer the exclusive burden of young people (under 25, I think). Nobody cared back then, I was told numerously that I was lazy and my own worst enemy for refusing (thus having my payment stopped). I suspect that nobody would care again if only the young were targetted.

Hi Marcel & Ben. Marce- Yes you have a point about under 25's. This again is the division of pitting groups against eachother and in this case Young V's Old which is beginning to be the next big polarized media-political war. Ben- Yes I have a new job now within the remains of the NHS which is being dismantled under our noses (this is a whole subject in itself). The pay is poor, we are short staffed and training support is very thin as they are cutting costs (yet private investers are sitting by the wayside) but it is steady paid work if not stressful. I am a Sterile Services Technician, in English I set up and process surgical equipment. YES BEN I THINK THE SOLUTIONS NEED TO BE MORE DRASTIC. I think this needs to be a combination of Social awareness and Inner Awareness (which are not two things). Cheers

Thanks for your comments, Marcel and X. I thought so, Marcel. I knew people who'd been out of work while I was Portering under the old Labour Govt and they told me about some of the plights they had to go through.
X, we used to call it HSSU at my hospital, Hospital Sterile Supplies Unit, they were ASC2 under the old system, on the same wage as a Porter, although I think you deserved more cos your job was more complicated.

Hi Ben. Yes, some are called HSSU and yes both us and the Porters were the lowest of the low in the Hospitals Heirarchy. Even some HSSU staff feel 'better' than porters because some earn slightly less and feel they do a 'better' job. It is all part of the strategy of Using Vowels and consonants in job titles, 'Bands' etc. We no longer work as a Hospital en toto but a series of departments and third party internal groups that seek to usurp eachother, a culture that comes from fear, uncertainty and manipulation. The NHS will become a badge only held up by the glue of private investment that only seeks profit, 'keeping costs low' and the good old 'flexible jobs market'.