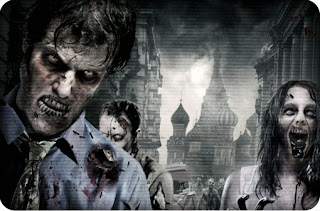 Some of you will have seen my recent live lecture on the terrifying possibility of real zombies in this world. If not, watch it for background: http://hpanwo-voice.blogspot.co.uk/2013/12/ben-emlyn-jones-live-at-truth-juice.html. There have been some updates on this situation since then. Roxy Lopez has interviewed two very interesting men, Dr Will Spencer and Patrick Jordan, on her radio show, The Truth Denied, see: https://www.youtube.com/watch?v=bJu3LqWI5q8 and: https://www.youtube.com/watch?v=oq2hpHDkm5o. These two men have made some of the same discoveries that I have, but have also researched into other related areas. Since then a new documentary film has come to my attention, see: http://www.youtube.com/watch?v=YdAe18Xvs4Q. This programme delves into the scientific possibilities involved with the cause of zombification, as I do myself during my speech linked above. The feasibility of the issue has even encouraged some members of the prepper community to include it on their list of nightmares that they're planning to survive. Remarkably the show takes seriously the notion that a government conspiracy might be behind a zombie plague, either through the testing of a new drug or a biological warfare attack. The Plum Island Animal Disease Centre is a well-known and highly secretive research facility run by the US Department of Agriculture and was part of the Cold War biowarfare programme. Today we've been told that the biowarfare programme has been terminated, but has it? Michael Carroll's book Lab 257 claims that the institution is to blame for the increase of Lyme disease cases, see:  http://www.amazon.co.uk/Lab-257-Disturbing-Governments-Laboratory/dp/0060011416. It might also be behind the strange "Montauk Monster" a body which washed up on a beach near , see: http://www.montauk-monster.com/; Skeptics say it's just a dead racoon, but is it? Today a second secure laboratory is being built to replace the aging facility, but instead of being placed on an island to contain an escape of any infected animal, this one will be located in ; close to the geographical centre of . If you wanted to start a pandemic, it would be the ideal place. The National Bio and Agro Defence Facility will open within the next couple of years and will be operated by the Department of Homeland Security, see: http://www.dhs.gov/national-bio-and-agro-defense-facility. The most likely cause of any emergent disease in the human population will be a new one in animals that transfers to man. If an animal with a disease "escaped" from this new laboratory, the epidemic could go as far as you wanted it to.

As also I explain in my lecture linked above, one of the two cannibalistic "zombie attacks" that took place within a single day of each other in the United States in 2012 was blamed on a new drug known as "bath salts" that disrupts the central nervous system. The man shot dead in after attempting to eat a sleeping tramp was supposedly intoxicated with bath salts. There's now a new and similar drug on the market, an opiate less than a tenth of the price of heroin. It's used mostly in where its street name is Krokodil- "crocodile". Like bath salts it causes strange behaviour and eventually brain damage, but it also gives regular users scaly necrotic skin lesions, which is how it got its name. This necrosis of the skin is another feature of zombies. Krokodil has even become known as "the Zombie Drug", see: https://www.youtube.com/watch?v=85R3rDLBIKk. It seems that more and more, as time goes on, evidence is coming forward to present the horrific possibility that a zombie apocalypse could really happen. This might be the tool which the Elite plan to use to justify all the measures they need for their totalitarian state. It could also pave the way for a new form of life, or "pseudo-life", in the human world or on the whole of planet Earth. But however horrific this notion is to talk about, it would be far more horrific is people were not talking about it. It looks as if the alternative research community is very much on the ball when it comes to this subject and we've got a good chance of exposing the conspiracy before it is unleashed on the innocents of the world.
Posted by Ben Emlyn-Jones at 10:20