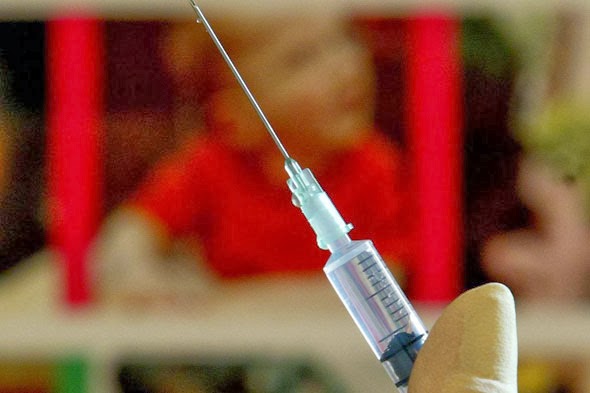 The Rt. Hon. Jon Cruddas MP has called for the parents to be refused benefits unless they can prove that their child has had the MMR vaccine, see: http://www.parentdish.co.uk/2013/09/23/mp-jon-cruddas-calls-for-benefit-cuts-for-parents-who-refuse-mmr-jab/. The controversial Measles, Mumps and Rubella vaccine was introduced in 1971 and an article published in The Lancet medial journal in 1998 that showed that the vaccine was linked to serious illnesses in children, including autism. The journal later retracted the article claiming that it was false. The NHS, the US Centre for Disease Control and prevention, and most other overseas medical organizations have published literature reassuring the public that the MMR jab "is safe!". The author of the original article, Dr Andrew Wakefield has been hounded out of his job and struck off the medical register by the General Medical Council. This is supposedly for "fraudulent activity", although it also might act as something of a deterrent to any researchers out there who feel like delving into MMR controversy again. I covered this subject in an article a few years ago; as time has passed I feel that I let Brian Deer off far too lightly and if I were writing this today it would have a much harsher tone, see: http://hpanwo.blogspot.co.uk/2010/05/dr-brian-deer-at-westminster-skeptics.html.

A very open-minded feature film has been made about the MMR autism controversy called Hear the Silence, see: http://www.youtube.com/watch?v=rT-2S7L-N9c. It illustrates the overwhelming support Dr Wakefield received from parents who were concerned for their children. Today Dr Wakefield is standing by his initial research, see: http://www.youtube.com/watch?v=d7kbWfsygG4. Officially MMR "is safe!" and it is offered to every child in the and many other countries as soon as they are born. 91% of children are given the jab in over sixty countries on every continent. Yet despite the outcry from governments that MMR "is safe!" and that they can prove it, they still find it necessary to use negative incentive and enforcement to maximise the uptake; why can't they just explain it to us? In many countries including the , it is compulsory by law to give your child their whole vaccination schedule, including MMR. Dr Paul Offit has called for the MMR jab to become compulsory everywhere and has advised the UK Government to do so as well, see: http://www.bbc.co.uk/news/uk-wales-22089485. Now we have Mr Cruddas cracking the whip too. This may not be the same thing as legal compulsion, but with the threat of losing benefits it amounts to it. In fact this is not the first time the Government has used this threat to force us, see: http://hpanwo-voice.blogspot.co.uk/2013/09/tory-boy-wants-more-slaves.html. They know that the benefits system gives them a lot of power. The Shadow Cabinet leader Ed Balls has been on TV to counter the claim that Cruddas' statement will ever be adopted as Labour Party policy, but I don't buy it. Jon Cruddas is a real golden boy of the party and is something of a rising star in politics and we need to check and see if he attends any future Bilderberg Group meetings. Cruddas is a policy coordinator and is in charge of Labour's manifesto for next year's General Election. He has already run for the deputy leadership and has been nominated as a potential future leader, and therefore future Prime Minister. No doubt his current stance on MMR will make him a hero of the Skeptic and atheo-Skeptic movements too, and they are gaining more and more political power every day.
Posted by Ben Emlyn-Jones at 15:49