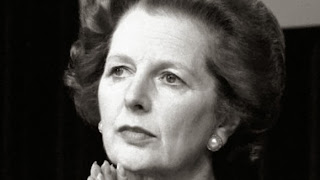 A newly-released batch of files from the National Archives in , reveals a dark side to 20th century 's most famous, and infamous, Prime Minister. See: http://www.independent.co.uk/news/uk/home-news/margaret-thatcher-nearly-sent-in-the-army-to-crush-miners-secret-papers-reveal-9034934.html. These documents were declassified under the Public Records Act of 1958, known as the "Thirty Year Rule", which automatically publishes all UK Cabinet minutes after thirty years have passed... unless, or course, they are further protected under different legislation. 2014 is the thirtieth anniversary of the 1984 miners' strike, the longest and most bitter industrial dispute in British history; and the minutes expose some remarkable and unsettling background information on it. In early 1984 Margaret Thatcher's Government announced the closure of 70 of the 's 174 coal mines. This would result in the loss of over 70,000 jobs. That was just to begin with; mining was the foundation of the economy for , the North of England and several other areas. The loss of the mines would be catastrophic to those economies, and it was. The National Union of Mineworkers called an all-out strike which lasted an entire year. Some people of a conservative persuasion have described it as a civil war, a leftist insurgency or even "a moment in which free civilization hung in the balance!" I always assumed this was just the shrill rhetoric of the tabloid press, but it seems the Government at the time were thinking along similar lines. Thatcher had learned the lessons of the miners' strike of ten years previously, which ended in the resignation of then Prime Minister Edward Heath; she had a stockpile of surplus coal and a special fleet of lorries to distribute it in case the railwaymen came out in support of the miners. After such a long struggle, the miners' will to resist was worn down and they returned to work defeated, those few who still had jobs to return to. Today there are only six working coal mines left in and most of the power stations of this country import coal from . Former head of the MI5 intelligence service Dame Stella Rimmington, the person on whom Judi Dench's character "M" in the James Bond films is based on, wrote a book in 2001 claiming that during the miners' strike Thatcher used the intelligence services to spy on leading members of the striker community. This has now been confirmed by these newly-released documents. MI5 did indeed monitor the movements and finances of NUM members. It was suspected that the was bankrolling the strike in secret. NUM leader Arthur Scargill was accused of setting up a funnel of cash from miners in , with the Kremlin's approval, via the Communist Party of Great Britain. Also Thatcher at one point was close to declaring a state of emergency and calling in the armed forces to keep the wheels of the nation turning as the strike expanded. Would they have also been used for constabulary missions too? Martial law?

These new documents also reveal more bizarre misdeeds going on behind the locked doors of the Cabinet Room in Number 10. Also in 1984 another crisis broke out at the Libyan Embassy in when a group of expatriate protestors who were opposed to the rule of Colonel Muammar Gaddafi stormed the building and tried to take it over. The Libyan ambassadorial staff members were armed and at one point opened fire on the mob surrounding the building. Eleven people were hit and a young policewoman, WPC Yvonne Fletcher, was killed. The newly-released documents reveal that the Government knew that there could be a shoot-out during the siege because a man in in the British ambassador's staff was told by a Libyan diplomat that the Embassy was protected by armed men who were ordered to use their weapons if necessary. There are other even stranger stories, like how the French secret service planted a bomb in the British Embassy in . This was supposedly to "test security", but what was really going on? was a bit of a loose cannon during the Cold War, neither wholly on one side nor the other, with a strong Communist Party that had several seats in L'Assemblee National, 's parliament. In fact in his book Spy Catcher, which was banned in the , MI5 agent Peter Wright spent more time spying on the French than the Soviets. The president at the time, Francois Mitterrand, never got on with his opposite number in and has claimed that during the Falklands War Thatcher demanded intelligence from him on 's French-built Exocet anti-ship cruise missiles which had destroyed a number of British ships. If he declined she had threatened to attack mainland with nuclear weapons, see: http://www.theguardian.com/world/2005/nov/22/books.france. If this is true then the subject was not brought up in Cabinet meetings because the Thirty Year Rule passed on the in 2012.

I've said before that in a strange way I feel better disposed towards Margaret Thatcher than I do any of her successors or antecedents. She was unique among statesmen for her honesty, her lack of hypocrisy, see: http://hpanwo-voice.blogspot.co.uk/2013/04/maggie-and-kim_20.html. Ironically, she was an enemy you could trust. However, it's clear that she was not completely devoid of a dark underbelly. These new revelations have got me thinking. If this information has remained secret for so long, then what else is there that has not been exposed yet? As I said above, it's perfectly possible that some of these Cabinet minutes from 1984 will still be held back under other legislation protecting national secrets. I'm curious to see what will be released next year under the Thirty Year Rule. This is because 2015 will mark the thirtieth anniversary of the of the Beanfield in which riot police stormed a camp of peaceful non-conformist travellers and evicted them with gratuitous brutality, see: http://hpanwo-tv.blogspot.co.uk/2012/07/battle-of-beanfield.html. Will we finally have official confirmation of what I've always suspected, that the Beanfield community were crushed because of the threat they posed to the conformist status quo, economically, socially, culturally and spiritually? I look forward to finding out; but I suspect that a secret on that scale will be one too sensitive for the public to know about and that it will remain hidden, locked in a secret vault, deep below the streets of Kew. There it will stay until enough people stand up to the authorities and refuse to take "no" for an answer any more. However, if it does come to light, be assured that you will read about it first on HPANWO Voice.
Posted by Ben Emlyn-Jones at 15:42