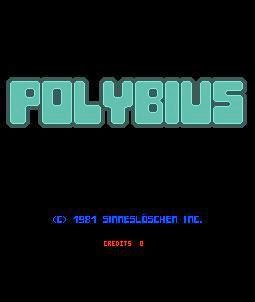 Nowadays computer games are enormously sophisticated, but there was a time, just a short number of years ago, when they were far simpler, using the crude electronics that existed within the lifetimes of even young people. However it's debateable whether that made them any less exciting and enjoyable. I find that some very homespun computer games are great fun. For the entire brief history of computer games there have always been two places where you can play them, at home on games consoles like Playstation or Xbox, or in public arcades where you can just walk in off the streets and play, in exchange for a coin dropped into a slot. A rich culture has developed around electronic games and there are many strange stories that "gamers" will relate whenever you get them talking in a pub, virtual or otherwise. One of those tales concerns a game called "Polybius".

Polybius is said to have been released in a local area as an arcade version in 1981 and withdrawn soon afterwards. There are many people around who claim to have played it, yet there appears to be no record of it ever having existed. In the is it listed as: "Manufacturer- unknown. Type- videogame. Cabinet style- upright/standard", see: http://www.arcade-museum.com/game_detail.php?game_id=11344. It was only introduced into some arcades in . It was designed by an individual as illusive as his creation named Ed Rotburg; he worked for a company called "Sinneslöschen"; this is a word in German that does not translate completely into English, but it literally means "deletion of the senses". Several people have come forward claiming to have been involved in the game's design and production, but they have produced no evidence to back up their story. The game was enormously popular to the point of addiction. People would queue up to play at each arcade station and there were even fights over who went next. People would spend as much time and money as they could on it. It was never released in a home console format; it would have been interesting to see what would have happened if it had. Some of those who regularly played Polybius also suffered from psychological and neurological problems like personality changes, insomnia, nightmares and memory loss which were blamed on the game. Witnesses who played Polybius describe it as being a 3D "shoot 'em up" in the same vein as Tempest, see: https://itunes.apple.com/gb/app/ataris-greatest-hits/id422966028?mt=8. It is reputed to have had very elaborate graphics for computer imagery of that era. There are a few images online that claim to be screenshots of the gameplay window, but these are impossible to verify. A website has been created with a reproduction of what the game might have been like based on interviews with those who claim to have designed it, or played it. It also features pictures of a replica cabinet, see: http://www.sinnesloschen.com/1.php. Despite its domain name, it is nothing to do with the original alleged Polybius producers. 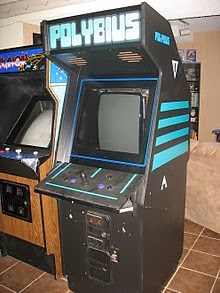 The most interesting element to this story is the effect the game seemed to have on those who played it. Could Polybius be some form of electronic mind control? It's well known that electrical fields and currents can have a major effect on brain function. Strobe lights can induce nausea and dizziness if they're shone into your eyes, and they can trigger a seizure in those suffering from epilepsy. Doctors used to run very powerful electric currents through the heads of those suffering from various mental illnesses. This was a very commonplace medical practice in the early 20th century, although it usually did more harm than good, and it was a part of the plot in the film Return to Oz and in Harold Pinter's play The Caretaker. Polybius could have been a government experiment along these lines. There are stories coming from witnesses about men in dark suits watching over the youths addicted to the game, asking them questions, analyzing the highest score screens and uploading data from the system's memory. "Sinneslöschen" is therefore said to be an alias for the US Governments psychological warfare operation, MK Ultra, or even a covert element within the electronics company, and major game producer at the time, Atari. Who knows? Maybe this is just another urban myth that has got out of hand, but mind control is a reality and electronic technology is almost certainly a part of that. Neil Sanders has researched this subject in depth, see: http://hpanwo-radio.blogspot.co.uk/2012/11/programme-20-podcast-neil-sanders.html. If Polybius was some kind of mind control experiment and it succeeded in 1981, imagine the level of technology the hidden hand behind the mind control agenda might have developed today!
Posted by Ben Emlyn-Jones at 16:38