Mystery Object spotted on the Moon 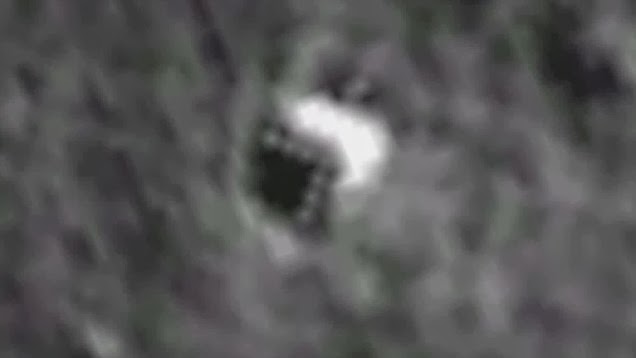 The Daily Mail is not often a source of quality journalism, but occasionally within the dung heap of right wing paranoia and narrow minded resentment, a gem peeks out, like here, see: http://www.dailymail.co.uk/sciencetech/article-2541410/What-mystery-object-spotted-Google-Moon-Bizarre-wedge-shaped-craft-appears-lunar-surface.html. This story appeared in the newspaper's science section... yes, believe it or not the Mail does have one... and it is baffling. It is centred around a photograph of an object discovered on the moon that looks very artificial. The method of discovery is not a telescope or spacecraft, but Google Moon, a programme similar to Google Earth, but for the moon. The article speculates that it might be a secret NASA moon base or maybe an artefact from an extraterrestrial civilization. The object is pretty large, it measures 410 by 295 feet and is wedge or chevron-shaped. It looks to me as if the light-coloured segment above is part of the structure and that the inner surface is concave, like the detached roof of a house. Along the near edge facing the camera are seven structures that are evenly-spaced and regular in size and shape. A row of circles, three on one side, three on the other and one on the apex; it seems highly unlikely that such a formation could emerge by accident.

We hear a lot about artificial-looking objects being found on other planets, but most of those objects are found on Mars; few are seen on our cosmic neighbour. At one time liquid water flowed on the surface of Mars as it does today on Earth. This means that in the distant past Mars must have had a far denser atmosphere and it must have been a hell of a lot warmer. If Earth-like conditions existed on Mars, why couldn't it have had complex life like Earth's? Perhaps an intelligent animal-like species evolved that could create large structures like the Face on Mars and Cydonia etc, see: http://www.youtube.com/watch?v=J4ZXzlpcv3o. However this whole notion is almost universally rejected by academics; these structures are all supposedly natural formations caused by plate tectonics, meteorites, volcanoes or erosion. Why? In distant future ages it's possible Earth may change to become arid and airless like Mars is today. This would sadly kill most of our life. Imagine at the same time Venus changed too, to become cooler and more habitable and that life evolved there. The organisms on Venus might develop to the point where they can send spacecraft to Earth and examine its dry and barren surface. They may see the remains of any artificial structures we built which are sturdy enough to survive that long, the Giza Pyramids, Hadrian's Wall etc. Will those future Venusians be in the same state of denial that we are today?... Or will they be the victim of a cover-up too? Yes, I think there is a knowing cover-up of this information and have said so for a long time, see: http://hpanwo-voice.blogspot.co.uk/2012/11/bbc-blocks-brian-cox-over-alien-fears.html.

As for the moon, it's a different story. The moon has never had an atmosphere or liquid water at all. Its geology, or selenology if you want to be pedantic, is born out of meteors impacting its crust. However, this does not mean it has not been visited by intelligences which come from other planets, including Earth of course (No, I don't mean the official history of that, see: http://hpanwo-voice.blogspot.co.uk/2012/07/marcus-allen-at-bis-update.html). Several of Dr Steven Greer's Disclosure Project witnesses have spoken of seeing uncensored images of bases of the moon, either alien or human or maybe both, see: http://www.youtube.com/watch?v=_4hycqDNnPE and: http://www.youtube.com/watch?v=tEBLmWhx1K0. These photographs were then doctored by NASA to remove any trace of the bases before they were released to the public. Perhaps one of these restricted images has somehow, by accident or design, made its way onto Google Moon. If it's by design, I'd like to thank whoever did it. Oddly enough The Daily Mail posts a link to a YouTube video which is the source for the story; however the video is the original one. I would have expected them to publish a clipped version or even upload and clip their own. The first thing you see on the vid is the word "Annunaki", see: http://www.youtube.com/watch?v=4EBzotgriEI. I'm astonished that this was not censored. I hope a few people who've never seen the word before Google it.
Posted by Ben Emlyn-Jones at 17:22