Goblin in a Suitcase scares Cops 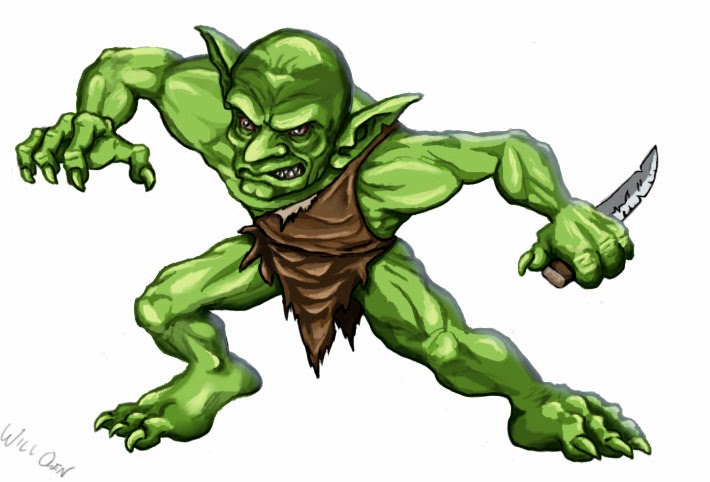 An unsettling and intriguing incident has been reported in . On Wednesday the 15th of January a family turned up at a police station near the Tshabalala district of the city with a suitcase that they say belonged to a lodger at their house. They were accompanied by a "traditional healer", which I assume means a native African shaman, a sangoma like Credo Mutwa, see: https://www.youtube.com/watch?v=QdZHCVvZbTY. They opened the suitcase and the police gathered round to look. It contained what's been described as a "bottle of blood" from which a "goblin" leapt out. The creature ran around the police station causing mayhem; police officers and members of the public fled the building. Some had to climb out through windows. The entity was overpowered by the shaman who then burnt it to death. Nobody knows what become of the body. There are no photographs or CCTV images of the creature that have been so far published, but witnesses describe it as being dog-like with a reptilian appearance; all witnesses agree that it gave off a terrible stench. 's police spokesman, Assistant Inspector Bhekimpilo Ndlovu released an official statement that the event did in fact happen. The suspicion at the moment lies with a criminal gang involved with witchcraft and the public were urged to stay vigilant. The lodger who owns the suitcase has disappeared. This story was reported in a number of mainstream and alternative media outlets that can all be traced back to this story from a local journal: http://bulawayo24.com/index-id-news-sc-local-byo-41479.html.

This is just one of a number of incidents involving strange creatures that have been reported from in the last few years. This photograph was put online in August 2012 by a group of hunters from who shot the strange creature they're displaying: http://www.youtube.com/watch?v=4C0db0vF5ac. This alarming entity is vaguely humanoid, but it could be an ape or monkey suffering from a deformity. However there was apparently a forest lair of four similar creatures; could four apes all be identically afflicted? Unfortunately the camera is badly focused; see how the man in the background is much clearer. The people took the body to the police who confiscated it; a "full forensic investigation" is supposedly underway, but there have been no updates since. So what was it? An extraterrestrial being? A hybrid of some kind? A cryptid? Or the product of some horrific experiment in a government laboratory? All these possibilities should be taken seriously. African folklore is packed with legends about unearthly monsters coming from the depths of the forest or conjured up by black magicians. One of the best known is the Tokoloshe of Zulu mythology; it is the theme of a controversial video Evil Boy by the South African rap band Die Antwood, see: http://www.youtube.com/watch?v=KbW9JqM7vho. So does this connect with what appeared in that suitcase in last week? Maybe. The "bottle of blood" might have been the container a sorcerer would need to blend the ingredients from which he could engender the beast. Alternatively it might have been a laboratory flask from a secret military base filled with suspension fluid or nutrient mixture in which a mutant was bred; the lodger could have been an ex-employee of the base on the run. This would make the "goblin" story very similar to the chupacabra or the products of Dulce Base, see: https://www.youtube.com/watch?v=XzWGsO0F3b8. In the video linked above, Credo Mutwa reports how he was abducted and held at a deep underground military and/or extraterrestrial base on the South Africa-Mozambique border. It's difficult to know what is behind this peculiar occurrence at the police station. But we do know something very unusual has happened and maybe the police will release more information in due course. I'll be sure to let you know if they do
Posted by Ben Emlyn-Jones at 14:14