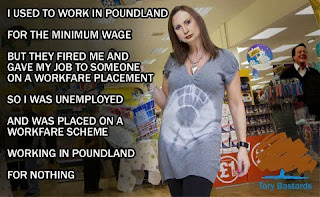 Listening to this year's Conservative Party Conference one could easily be forgiven for thinking that they have not changed at all since the days when they were satirized by Harry Enfield's Tory Boy, see: http://www.youtube.com/watch?v=EucJIl0uonE. The coalition chancellor George Osborne has just announced a brand new "work experience" scheme for the long term unemployed, see: http://www.bbc.co.uk/news/uk-politics-24327470. From the dawn of the welfare states, in most countries, it has been suggested many times that unemployed people should be forced to do unpaid work on state-controlled labour schemes. For over fifty years these schemes were suggested, trialled and cancelled; this was because of their enormous practical and ethical drawbacks, yet in the last few years in the UK the current government work-for-benefit policies have been pushed through much more vigourously and have now sadly taken hold. The ridiculous and insulting myths about the unemployed have never been propagated more than by the 's Conservatives. Phrases like "on yer bike!" and "it's all on my money!" are unfortunately still widely circulated. However very few people who have ever experienced unemployment, especially nowadays, actually wants to be unemployed; and I'd categorize those few who do as suffering from self-harm and call a doctor! Also the injection of a huge pool of unpaid labour into the economy will cause enormous damage. Far from solving job-losses, it will make it far worse. In the linked BBC article Osborne has suggested the unemployed people be made to pick up litter; well there are people currently paid to do that who will have to be made redundant in order to create vacancies for these... I'm going to say it, slaves. Perhaps like the unfortunately woman in the photo above, the same staff could start back straight away on Monday! See here for background: http://hpanwo-voice.blogspot.co.uk/2013/07/work-experience-for-unemployed.html.

I must say I do marvel at the creative use of Orwellian language by the Tory spin-doctors: "Help to Work"; the Ministry of Truth itself could not have published better! The BBC coverage on the early morning reports of the conference said that this new policy was very favourable in the opinion polls; I find this deeply frustrating. Anybody who supports this policy is forging their own shackles and I urge them to think again. I don't wish to condemn too fiercely; with the kind of media we have, run by highly-trained experts in "public relations", it's hard to resist their propaganda. The bestselling book by Owen Jones, Chavs- the Demonization of the Working Class, explores this propaganda and why it has emerged, see: http://www.versobooks.com/books/1100-chavs. "Chav", a derogatory word from the Gypsy language, is now used by almost everybody and it has a very loaded meaning. Its effect on individual minds and our culture at large has allowed the Government to get away with what it is doing unhindered, even championed, by those who are most likely to be their victims. We have to speak out now and put a stop to this vicious and devastating nonsense.
Posted by Ben Emlyn-Jones at 14:25