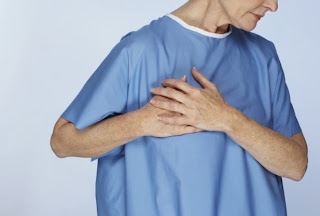 A young, fit and perfectly healthy accountant, housewife and mother is about to have a double mastectomy; she will have both her breasts surgically removed. Louise Preece from Grove in Oxfordshire will undergo the operation at my old hospital, the John Radcliffe, see: http://www.oxfordmail.co.uk/news/10689978.Healthy_mum_to_have_both_of_her_breasts_removed/ (another silver lining on my dismissal from Hospital Portering!). This is being done despite the fact that she does not have cancer and never has had it. The reason she has taken this drastic decision is to prevent herself from developing breast cancer in the future, a disease from which her own mother is currently dying. Mrs Preece's family history of the disease increases her own chances of getting it manyfold and she can't bear to think of her own son enduring what she had to with her own mum. She has already had her ovaries removed, the equivalent operation to castration in males. This will result in her experiencing premature menopause and possibly problems like osteoporosis, psychological illness and many other conditions caused by hormonal upset. It's difficult to know what to say to people like Mrs Preece, who is faced with this situation in her personal life, with a husband and child to look after and the trauma of watching her own mother's predicament. Inevitably there are aspects of this matter that I would never raise with her in person, but they need to be said nonetheless.

This kind of treatment is highly controversial and some doctors will refuse to carry it out even if their patient demands it. However it is becoming far less controversial every day thanks to the publicity generated by the actress Angelina Jolie. Last February, at the age of just 37, Jolie underwent her own prophylactic double mastectomy amidst a media furore. The result of this has become known as "The Angelina Effect" and it has had a major impact on medical ethics. She had known for some time that the tendency towards breast cancer was in her family because her mother, grandmother and aunt had all died of it, but it was when she had her DNA tested that the clincher emerged. Angelina Jolie has a sequence of DNA in her genome called BRCA1, pronounced "bracker-one", and it is this gene which is said to be the cause of her hereditary tendency to suffer from breast cancer. By one of those strange coincidences that so often occur, Jolie's announcement and subsequent treatment just happened to come at the same time that an unusual court case was underway; the scientific team that had first isolated BRCA1, the National Institute of Environmental Health Sciences together with a private company called Myriad Genetics, were applying for a patent on the gene. The reason was so that they could then "own" the gene and therefore charge a licence fee for the BRCA1 medical test. This was a unique situation in scientific history; for the first time, a part of the human genome would become the intellectual property of a government and corporation. If they won then they were looking to make billions of dollars. In fact as soon as Jolie made her announcement Myriad Genetics' stock prices skyrocketed! Their case was heard at the US Supreme Court and they lost; however the application was only one of many around the world, and the Federal Court of Australia ruled in Myriad's favour. Therefore in the company does own this part of the human genome. This means if you're an Australian doctor and you carry out a BRCA1 test on a patient you must buy rights from Myriad or you'll be in breach of Copyright!

The most interesting part of the Oxford Mail article was where Mrs Preece says: "the geneticists fear my mum and I may carry a cancer gene, but one they cannot test us for." But they can, in the sense that they are able to, they're just not allowed to yet in this country because Myriad Genetics will lose their cut! I feel infuriated at this situation and I'm frankly more than suspicious about the origins of this article. But this wouldn't be the first time corporate greed has taken advantage of somebody's tragedy; they did it with Angelina Jolie and now they're doing it to Mrs Preece. The difference here is that Jolie can afford the most expensive reconstructive surgery so her feminine appearance will be restored after her mutilation. Mrs Preece will probably have to make do with the off-the-shelf NHS ones which don't look as good. What will the next stage be? Well firstly, they're not going to stop with women; already there are already some men considering having their prostate gland removed prophylactically, see: http://www.cancerforums.net/threads/7774-There-Are-Positives-About-Prostate-Removal. Do you want to bet we'll soon see Richard Gere or George Clooney having this done? The evil irony is that the same industry behind this media fest is also sitting on very effective anti-cancer treatments because they work too well, see: http://www.youtube.com/watch?v=QeYMduufa-E. Apart from the avarice of this emerging "genetics industry" there's a sinister undertone of transhumanism here. They're effectively saying that our own natural bodies might kill us. This is a recurring theme in the transhumanist agenda, it's dressed up as medicine. Nature is not good enough so it must be replaced with something artificial. The end goal of this trend doesn't bear thinking about, but we must do it. I've spoken before about how the Illuminati want to depopulate the Earth, see: http://hpanwo-voice.blogspot.co.uk/2013/07/earths-population-reaches-7-billion.html, but don't consider yourself lucky if you're in the one-in-ten permitted to live in the New World Order. You will not be living as a natural human, but instead as a cyborg, a genetic modified and semi-mechanical monster, see here for background: http://hpanwo-voice.blogspot.co.uk/2013/09/bases-project-live-in-london.html. Miles Johnston is right; we are indeed probably the last generation which has the power to put a stop to this.
Posted by Ben Emlyn-Jones at 13:17