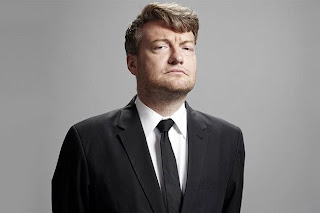 The Guardian more than any other newspaper seems to have a knack for employing the most obnoxious little super-liberal poopsies as columnists; latest example: Charlie Brooker. A friend of mine made me aware of this article from his column, albeit a very old one from 2006: http://www.theguardian.com/commentisfree/2006/dec/04/television.comment. In this wicked and putrid diatribe against psychics, Brooker begins by attacking a typical and convenient mainstream media strawman and then afterwards calls for the imprisonment of psychic mediums... for life, without access to light or running water. There's no disclaimer on this statement and no tone of mockery; as far as we know he means it literally. I actually don't have a problem with ignorant people, you can ignore them; but Brooker is different because his ignorance is attached to an incitement to state-sanctioned violence and a contemptuous disregard for civil rights. This cannot be ignored because it could do harm to the psychic community and we will need to defend ourselves legally; I'm sending this article to a solicitor I know who specializes in psychics and the law. Skeptics are mostly harmless, but creeps like Charlie Brooker are more than just Skeptics, they're Skeptopaths and they are dangerous!

An amusingly ironic conclusion to his attack on psychics is that he then advises his readers to visit Ian Rowland's website to find out more about cold reading, see: http://www.ianrowland.com/. "Look at the other side of the story." It doesn't work like that, Brooker! You can either inform people or terrorize them, but you can't do both. This is so typical of hard line Skeptics, after the torture session they sit opposite you on a chair with the back facing forward, blow cigarette smoke in your face and say: "OK, let's have a discussion about scientific evidence." What's more they usually have such a wanton lack of introspection that they believe themselves. In fact, this article is yet more proof of what I have long suggested, that if psychic mediums are genuine then the intellectual environment necessary for that fact to be generally-accepted does not exist. See here for background: http://hpanwo-voice.blogspot.co.uk/2013/06/psychic-sally-wins-lawsuit.html and: http://hpanwo-tv.blogspot.co.uk/2013/03/down-with-skeptocracy.html. There's no point asking Brooker to explore the other side of the story; he wouldn't even understand what that is. It is an unknown country which lies inside the event horizon of his own moronic bigotry, shielded by a veil of cognitive dissonance. Nevertheless, anybody with half a brain... Brooker probably doesn't even have a quarter of one... will see from a quick flick through the Web that psychics and similar phenomena are actually a serious field of research done by professional sensible, and completely sane, investigators, see: http://www.assap.ac.uk/ and: http://www.spr.ac.uk/main/. The Skeptic Movement very badly misrepresents the subject. However, until now I had no idea how that misrepresentation could drive an unconscious and unthinking man into such maniacal and pernicious rhetoric.
This is the second time in as many weeks I've had run-ins with journalists from The Guardian, see: http://hpanwo-voice.blogspot.co.uk/2013/08/anti-feminist-demonization.html.
Posted by Ben Emlyn-Jones at 23:49

Charlie Brookers article might be claimed to be, an exercise in tongue-in-cheek hyperbole. But I don't see how he could appear anymore abrasive,and vindictive and the article certainly works as a bait for literal minded angry dullards. A virtual lynch mob, focussing bizarrely on this nano- offence of fake mediums amongst all of the vast crimes around them
such as banking scandals, fake politicians, Vatican gold smuggling etc.

SHINYSCALP a commenter correctly identifies them as pedants.Thats a clue to their perennial immaturity and wannabe cruelty.

"This is so typical of hard line Skeptics, after the torture session they sit opposite you on a chair with the back facing forward, blow cigarette smoke in your face and say: "OK, let's have a discussion about scientific evidence." "

Weell said Ben, and the same scenario is played out to me by skeptopaths daily. Their insistence on "controls" for mediums and psychics is actually code for tying up and gagging people and blindfolding them to make impossible any paranormal feat, all disguised as "scientific ontrols"

Its actually a psychopathic criminal aggression and thuggery fantasy. Victims are only safe from this by the cowardice and feeble mindedness of the skeptic.

Brooker is correct though when he says that the burdon of proof lies with the psychic, isn't he?
Personally, In order to concentrate their minds, I would brick them up and release them immediately they provide convincing proof. I suspect very few, if any, will see the light of day again.
They are the wicked one; the deceivers of people who are being taken for a ride. This sanctimonious gobbledygook has no place in an informed society. They should be exposed and ridiculed at every opportunity.


Hi – It’s good to read such interesting stuff on the Internet as I have been able to discover here. I agree with much of what is written here and I’ll be coming back to this website again. Thanks again for posting such great reading material!! To get new information visit here