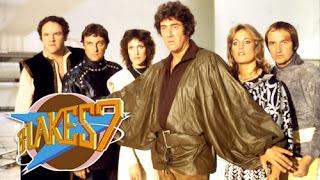 Blakes 7 was a highly popular BBC TV science fiction drama series that ran from 1978 to 1981, and a new series is now in production for the Syfy channel, see: http://www.bbc.co.uk/news/entertainment-arts-22079232. Another news story says the programme is being made for the Xbox Live, see: http://www.bbc.co.uk/news/technology-23712001. I've written about Blakes 7 before because it deals in a surprisingly perceptive way with a lot of the subjects I cover on HPANWO, see: http://hpanwo.blogspot.co.uk/2007/10/blakes-7.html. I wonder if the remake could possibly be as good as the original; will it have the same themes and the same level of awareness? The production team are different with Martin Campbell directing and Joe Pokaski as a script writer; will any of the original cast and crew be included at all? They're all a lot older now, but usually in the case of remakes they bring somebody out of retirement, mostly for sentimental reasons but sometimes for the purposes of continuity and authenticity. We shall see; I look forward to the results enormously.
Posted by Ben Emlyn-Jones at 16:06