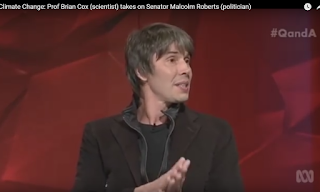 Prof. Brian Cox has been up to his usual tricks. This time he's been wheeled out onto an Australian panel talk show to defend the notion of man-made climate change. The programme is entitled Q&A and is similar in format to the BBC's Question Time, albeit with a less formal arrangement; typically Australian. That smiling Simeon of the small screen was pitted against a politician, Senator Malcolm Roberts, an advocate for the idea that climate change is not caused by human activity, a viewpoint I share; see the background links below for more details. His Royal Coxness has clearly been coached in advance, indicating the producers anticipated or even planned this debate. He has with him a stack of scientific data printouts, including some graphs. The viewer cannot see the details of these in frame. The debate opens with Cox being given the complete floor for almost three minutes, with the host only asking him questions about what can we do about climate change etc. Cox says that the worst thing about climate change is that parts of the could become uninhabitable. That's odd because most climate scientists claim that rising sea levels are the biggest threat. Senator Roberts then gets less than a minute to respond before Cox interrupts him and produces one of the graphs. As I said, these can't be examined in detail by the viewer, but they clearly only show records since 1880. The host then quips: "Malcolm, you're hearing the interpretation of a highly qualified scientist and you're saying you just don't believe it; is that right?" The audience responds to the cue and laugh and applaud. They jeer at Roberts and laud Cox. That's strange because I always thought The Coxxer was a particle physicist, not a climatologist. What makes him more qualified than Roberts, who runs a climate sceptic think tank? As I've reported in my study of Cox, however much he knows about his own subject, he is pig ignorant about most others. He's made some extremely foolish comments on the paranormal, UFO's and conspiracy theories. Senator Roberts tries to explain the political forces, including those from NASA, that have corrupted the data that went into graphs like that and he is interrupted by Cox twice in the same sentence. "How?...  By who!?" (It's whom, not who. English grammar is another area where Cox' knowledge has very sparse coverage). Even the host then shuts Cox down and allows Roberts to have his say. Cox butts in after a mere forty seconds and scoffs: "NASA, the people who landed men on the moon!?" he then goes on to suggest Roberts doesn't believe in the moon landings. There's nothing wrong with that per se; I don't either, see: http://hpanwo-radio.blogspot.co.uk/2016/03/programme-179-podcast-marcus-allen.html, but that's not the point. The point is that Cox is hitting Roberts with a personal slur; and Roberts, to his credit, picks him up on it. Cox doesn't address Roberts' concerns about institutional collaboration properly and misrepresents Roberts' position when it comes to its nature. After that the host brings in the other guests on the panel who do nothing except boast about the Paris Accord and other statements under the proviso that anthropogenic global warming is real. One of them says: "I can't believe we're having this discussion. We should be talking about what we're going to do about climate change!... It is real!...We have scientific consensus!" Roberts rightly picks them up on their fallacy of appeal to authority. Cox interrupts him after just twenty seconds. Then another panellist gives an anecdote about how her friends went swimming in winter. Cox then has another two minutes of the floor. Roberts, understanding the new rules of engagement, tries to interrupt twice, but not until Cox has been running downhill for over one minute twenty. When he gets his reply, Cox butts in after less than ten seconds. Eventually Roberts get the floor for another thirty seconds, but, sure enough, Mr Smiley-Face has to cut him off again: "No! That's flat out wrong!..." he says as he thumps the table, without actually explaining why Roberts is wrong. Then the host gives Cox a one minute twenty second monologue. After that he takes a comment from the audience and the discussion shifts back to the climate change establishment a priori position. The host eventually turns to Senator Roberts and asks him sarcastically: "If you (Pauline Hanson's One Nation Party) were in government, would you just sack all the climate scientists?" There's a serious point behind this jibe that the host doesn't realize. However much he polarized the issue, climate change is big business; one of the biggest in the world. It is an industry in itself; see background links below for details. Roberts tries to reply, but after thirty seconds the host clears his throat and the audience chuckle. "Final word to Prof. Brian Cox." he announces. Cox' "final word" is over two minutes of being the star of the show yet again. Then an entirely new subject is raised from the floor. Later in the programme, when climate change is briefly mentioned again, Cox actually throws the papers at Roberts in an aggressive way. Source: https://www.youtube.com/watch?v=qVB-rpC2x3w.

There's no doubt that under the rules of proper logic, Senator Roberts won this debate. The problem is that this was not a logical TV show... how many are these days? The other panellists, led by Prof. Cox-Head, failed to respond to Roberts' points and just quoted consensus and establishment at him, mixed with rhetoric, ad hominem and appeals to emotion. As TV debates go, this is yet another one-sided unprofessional hatchet job, right down there in the gutter with Ken Livingstone's Nazi one, see: https://hpanwo-voice.blogspot.co.uk/2016/05/is-ken-livingstone-nazi.html. There is no doubt any more that Prof. Brian Cox is being set up as the golden boy of authoritarian scientific media deception. I just hope my antipodean fellow viewers saw through this debacle. I would be disappointed if they haven't because it was easier than usual for me. The mainstream press has been particularly frenzied over this, for example see: https://www.homelogic.co.uk/brian-cox-there-is-absolute-consensus-on-climate-change/.
See here for background: https://hpanwo-voice.blogspot.co.uk/2013/09/prof-brian-cox-watch-this-space.html.
And: http://hpanwo-tv.blogspot.co.uk/2016/03/merchants-of-doubt-review.html.
And: http://hpanwo-tv.blogspot.co.uk/2015/12/climate-change-2015.html.
And: http://hpanwo-voice.blogspot.co.uk/2015/07/three-climate-scientists-killed.html.
Posted by Ben Emlyn-Jones at 19:14

Excellent report Ben. Such is the detail, I was spared the indignation of watching the unbearable chancer on Aussie telly. The scientific ability and intelligence of Professor 'Things can only get better' IMO are much exaggerated, as evidenced by the level of logic and argument in the report. Talk about being promoted above your station: the boffins are mesmerised by a bit if stardom, it would seem.

Cheers, Laurence. Cox has had his ego massaged like a Turkish bather. I doubt if he even understands that he's a figurehead for forces behind the scenes that he couldn't even comprehends, and denies in the most close-minded way.

The audience of Q&A is stacked with left leaning communists and other factions of Zionism, multiculturalism, etc. It's not even worth watching. The real battle lines are internet social media user minds and what people are willing to do if technocrats enforce the likes of carbon taxation paid in to the Zionist.Vatican Order's pockets.

Real science and pattern recognition, not computer forecasts, is pointing to a mini ice age caused by the Grand Solar Minimum we are now heading into. All the prediction of rising seas and extreme heat have failed to eventuate.