Victor Nevada in the Media 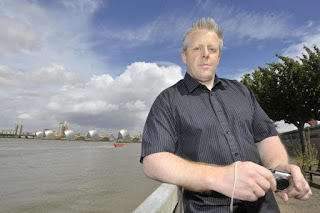 My good friend and fellow researcher Andrew Burlington has been featured in the newspaper News Shopper. The online edition includes a video Andrew shot in Charlton. Andrew has been capturing stills and footage of strange objects flying over east for some time and he regularly shares his findings on social media. The news story is fairly good... compared to most others on the subject. Despite it using the demeaning phrases "UFO buff" and "hobby UFO researcher" it is long, detailed and reasonably factual. It includes statements from Andrew and mentions that both Nick Pope and Gary Heseltine endorse Andrew's discovery. Andrew's nephews were with him when he had his sighting and back him up too. The paper also takes Andrew's advice and contacted air traffic control at the nearby City of London Airport to see if they detected anything odd on radar, but they declined to comment. I wonder where that policy comes from. It might be worth getting them to say something via the Freedom of Information Act. Source: http://www.newsshopper.co.uk/news/14705614.VIDEO__UFO_researcher_seeks_help_identifying__mothership__spotted_heading_towards_south_east_London/. Regular followers of HPANWO will be familiar with Andrew because he is the man behind the "Victor Nevada" YouTube channel, the project to investigate the mysterious Alien Interview film, see: http://hpanwo-radio.blogspot.co.uk/2016/07/programme-196-podcast-alien-interview-20.html and: http://hpanwo.blogspot.co.uk/2015/01/area-51-alien-interview-new-research.html.
Posted by Ben Emlyn-Jones at 16:57