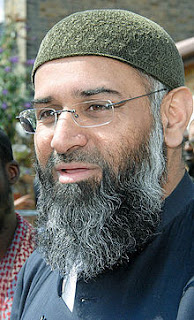 The Islamic hate-preacher Anjem Choudary was found guilty of supporting terrorism at the end of July 2016. The press was restricted from reporting on it until only last week because it might potentially prejudice another trial (This in itself is interesting because nothing leaked at all. Skeptics always tell us big secrets can't be kept in the modern world. How much else has been restricted and we never find out?). Choudary will be sentenced next month and will probably be given ten years or so in prison. I've reported on Anjem Choudary before, see background links below. He read law at university and was already a trained solicitor before he was recruited by MI6. During the Bosnian war he worked for British intelligence, running behind the scenes operations against the Serbian forces occupying Muslim regions of . After the war he underwent a sudden change of life... apparently. He left MI6 and became a radical Muslim extremist, growing his beard long and wearing traditional Islamic garb. He founded an organization that has gone by many names, but is usually known as Al Muhajiroun. He and his cohorts do very little except when TV and newspaper cameras are present; then they seem to appear like magic out of nowhere, in their skullcaps, beards and shirttails. They perform some inflammatory and antisocial act like picketing a soldier's funeral or burning Remembrance poppies in front of the media, and then they simply go home. They're never referred to in the press at any other time unless it's to report on the social security benefits they receive. Choudary was finally arrested and jailed, but will he ever go to prison? I doubt it. As I explain in detail below, it's very likely indeed that Choudary is a disinformation agent planted deliberately in the media to play the role of "evil Muslim cleric". As we see in this debate, Choudary the devout Muslim can't even speak proper Arabic and doesn't know his verses off by heart: https://youtu.be/9XtUsRyWAcg?t=1m25s. We will be told he's gone to prison, but he will simply be reassigned. Either that or he'll shave off his beard, if it's even real, and retire to some luxury villa in , see: http://www.dailymail.co.uk/news/article-3732890/Anjem-Choudary-GUILTY-inciting-support-ISIS.html. Since then RT has come across additional information that the police have wanted to prosecute Anjem Choudary for many years, believing they had evidence to charge him with up to fifteen counts under antiterrorist law, but were stopped from doing so by direct orders from MI5. They were told Choudary had to remain free because he was crucial to MI5 ongoing investigations... I bet he was! A police source said: "I am gobsmacked that we allowed him to carry on as long as he did. He was up to his neck in it, but the police can’t do full investigations on people if the security service say they are working on a really big job, because they have the priority. That is what they did constantly. While the police might have had lots of evidence, we were pulled back by the security service because Choudary was one of the people they were monitoring. It was very frustrating and did cause some tension, but we were told we had to consider the bigger picture." I hope people reading this will become more suspicious of government's pronouncements when whoever Choudary's replacement is, is paraded in the popular press as the comic book antagonist we all have to unite and fight, see: https://www.rt.com/uk/356707-mi5-police-choudary-isis/.
See here for background: http://hpanwo-voice.blogspot.co.uk/2013/08/engineered-islam.html.
And: http://hpanwo.blogspot.co.uk/2010/01/muslim-clerics-are-they-shills.html.
And: http://hpanwo-voice.blogspot.co.uk/2011/07/fake-muslim-posters.html.
And: http://hpanwo-voice.blogspot.co.uk/2013/12/abu-hamza-false-flag-murder-plot.html.
And: http://hpanwo-voice.blogspot.co.uk/2014/02/lee-rigby-patsies-get-life.html.
Posted by Ben Emlyn-Jones at 18:04