Alien Base in Argentina 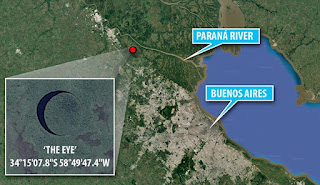 A group of UFO researchers have made an extraordinary discovery that could be definitive evidence of an extraterrestrial presence on earth. There is an island in some marshland in that is set in a circular pond that appears to float. Dubbed "the Eye", this island changes position within the pond. It rotates and moves from one side to the other, rolling around the perimeter, leaving a crescent-shaped channel of clear water behind it. It is about a hundred and thirty yards across and although a natural process can form floating structures like this in a wetland, the regularity of this object and the other observations of it behoves us to take a second look at this phenomenon. is renowned for its extensive UFO activity, even compared to the rich levels already common to the continent of . There is a thriving UFOlogical community there, including an Exopolitics Argentina organization that I've communicated with myself. Researchers Richard Petroni, Pablo Martinez and Sergio Neuspiller have launched a project to investigate this anomaly. They've already carried out an expedition to visit the Eye. The Eye has been in existence since at least 2003 and can be seen on Google Earth. Its grid reference is: 34 degrees 15'07.8 S- 58 degrees 49'47.4 W. This is in the far northeast of the country, a short distance from the vast metropolis of Buenos Aries. It lies in the swampy depths of the Rio Paraná river delta and can only be reached on foot. Petroni, , Neuspiller and their team trudged and waded for over eight hours through the boggy terrain to find it.

When they arrived Neuspiller described the location: "The place was amazing and extremely strange. The water is incredibly clear and cold, something totally unusual in the area. The bottom is hard, in contrast to the swampy marshes surrounding it and the centre part floats. We don't know over what, but it floats." They took some photographs which are published in the source article and website below. Local people in the area are continuously reporting paranormal encounters and have a plethora of superstitious theories concerning their cause. Neuspiller, and Petroni are keen to find out if there is a factual story behind these experiences. They've launched a Kickstarter campaign in order to fund a scheme to investigate the Eye fully. Along with UFOlogists they will need scuba divers, geologists, biologists, and specialists to take samples of the plants, water and soil. They might need submarine drones to investigate some underwater areas where divers cannot go. They plan to film a documentary about their endeavour, see: http://www.elojoproject.com/. The project organizers think this might be a hidden entrance to a secret underground alien base. That theory can't be ruled out at this point. It might also be a covert government installation, or perhaps even a mixture of the two. Source: http://www.dailymail.co.uk/sciencetech/article-3764027/Is-mysterious-eye-island-near-Argentina-hiding-alien-base-Kickstarter-campaign-investigate-bizarre-rotating-island-launched.html. They need to take care. If there is a secret base below the Eye then its owners will not want its clandestine nature revealed. Richard Sauder has a lot of experience of searching for secret underground bases and his books provide a valuable guide to missions such as these. He gives us some clues to look out for. Such as lakes that do not freeze over in winter (if the location is in a temperate climate), carparks in the middle of nowhere that seem to serve no purpose, carparks outside buildings that look too big for the facilities they serve, houses and other structures with haze above them indicating heat extraction ducts etc, see: https://www.youtube.com/watch?v=NZRg4p-KWxw. I myself have carried out a search for evidence of the secret base AL/499 that is reputed to lie beneath the , see background links at the bottom. If the Eye is part of an extraterrestrial and/or covert government institution then this might have something to do with the extraordinary level of UFO and paranormal activity in the area; and even the larger region of and its environs. Even when I was a small child and it was going on at the time, I was suspicious of the professed motives for the Falklands War, that the government had sent a taskforce halfway around the world to liberate the islands from their Argentine occupiers because they "cared about the rights of the people". Since when have governments done anything inspired by the rights of ordinary people? There are some very obvious signs of underlying reasons why sent the troops to the in 1982, and indeed why invaded what they call the Islas Malvinas in the first place. The researcher David Griffin has recently discovered that there may well be extraterrestrial intervention involved. Here is a frightening but fascinating video about the role UFO's and aliens might have been playing in the sovereignty dispute: http://www.youtube.com/watch?v=BCJSKhtTtC0. If this is true then what lies beneath the Eye could be a part of that too. We shall see, but I'm keen to see how this story develops.
See here for background: http://hpanwo-tv.blogspot.co.uk/2013/10/peasemore.html.
And: http://hpanwo-tv.blogspot.co.uk/2013/12/peasemore-2-harwell-laboratories.html.
And: http://hpanwo.blogspot.co.uk/2008/07/jack-of-antarctic.html.
And: https://hpanwo-voice.blogspot.co.uk/2013/03/the-knobheads-of-war.html.
And: http://hpanwo.blogspot.co.uk/2007/10/belgrano-last-shot-of-war.html.
Posted by Ben Emlyn-Jones at 19:30