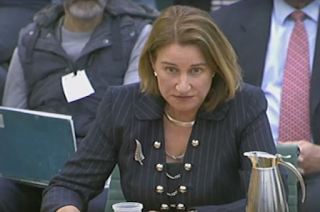 The third head of the "independent" inquiry into child sexual abuse has resigned. Justice Dame Lowell Goddard QC was brought across from the other side of the world to chair the inquiry after two initial aborted launches. The New Zealander was considered the most qualified judge available, which says a lot for the 's ability to police its own institutions. Was nobody closer to home suitable? Justice Goddard was appointed after the previous head, Fiona Woolf, the former Lord Mayor of , stepped down over her friendship with Lord Brittan, one of the accused. Ms Woolf herself was only given the job in September 2014 after the initial head on the inquiry, Baroness Elizabeth Butler-Sloss, was dropped because she was considered "too close to the establishment" because she is the brother of the Attorney General, Michael Lord Havers. The Home Secretary Amber Rudd has announced that the inquiry must proceed "without delay!" For the survivors of institutional child abuse, that statement must sound like a sick joke. This government inquiry into its own misdemeanours was opened over two years ago and they still have not even found anybody to chair it who doesn't jump ship as soon as they're recruited. In the case of Lowell Goddard, she was appointed in February last year and has been swanning around since then, including taking a three month sabbatical, see: http://www.bbc.co.uk/news/uk-36984279. In the background links below you will see that Goddard's resignation is exactly what I predicted; as did Brian Clare on HPANWO Radio. What we're seeing here is a thinly disguised attempt to kick the can further down the road, yet again. The government is clearly desperate to prevent this inquiry from ever taking place. Either that or it will never take place until the trail is completely cold. They hope that by dithering for long enough the evidence of their complicity will fade to the point where it becomes useless. No doubt they'll also take the opportunity to actively conspire to suppress facts.
See here for essential background: http://hpanwo-radio.blogspot.co.uk/2016/07/programme-195-podcast-brian-clare.html.
And: http://hpanwo-voice.blogspot.co.uk/2015/02/new-judge-for-child-abuse-inquiry.html.
And: http://hpanwo-voice.blogspot.co.uk/2014/11/still-no-mr-fixit-for-child-abuse.html.
And: http://hpanwo-voice.blogspot.co.uk/2014/07/did-thatcher-cover-it-up.html.
Posted by Ben Emlyn-Jones at 12:33