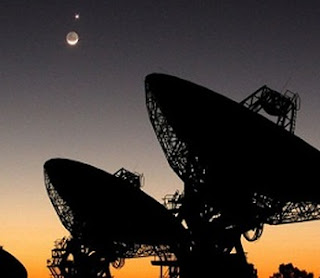 I'm very fond of the Robert Zemekis film Contact. It is based on a novel by Carl Sagan and is all about an idealistic young astronomer, brilliantly played by Jodie Foster, who discovers a radio signal from an intelligent extraterrestrial civilization in the far reaches of outer space. The story is inspired by a real scientific project, SETI- the Search for ExtraTerrestrial Intelligence (Not to be confused with Dr Steven Greer's CSETI). I've written before about another recent case in which the possible signs are there that this mission could soon be accomplished. There is the discovery of anomalous readings from KIC8462852, also known as "Tabby's Star"; see: http://hpanwo-voice.blogspot.co.uk/2016/04/mysterious-star-update.html. A few days ago astronomers announced the discovery of the closest exoplanet yet discovered; a small world orbiting Proxima Centauri B, the sun's closest stellar neighbour. This planet looks like it could be in the "Goldilocks zone", where the temperature is just right so that water can be liquid on the surface and therefore earth-like life could exist, see: http://www.extremetech.com/extreme/234631-theres-an-earthlike-planet-orbiting-our-nearest-neighbor-proxima-centauri-but-how-might-we-actually-get-there. Now scientists in have published a report on another star that has an unusual radio signature. For over a year they have been monitoring the star HD164595... which will also soon be given a more euphonic name no doubt. This is a G2V type star, the same as the sun, about ninety-four light years away in the constellation of Hercules. It can be seen with a small telescope or binoculars and is close to the very bright star Vega in the constellation of Lyra, which interestingly plays a major role in the plot of Contact. In May of 2015 the scientists picked up an 11 GHz signal emanating from the bearing of the star. Despite continued observation this signal seems to have been a one-off, a bit like the "WOW!" signal, see background links above and below... Or at least that's what we're being told. We know from Prof. Brian Cox' TV series... one of many he is in... Stargazing Live, that the authorities are careful about information from the beyond, see link below. According to Dr Seth Shostak of SETI the signal is consistent with the kind of thing an alien civilization is likely to do in theory, but it could just be a mistake caused by accidentally picking up a transmission from a satellite or spacecraft. However we know that this star has at least one planet orbiting it; could it be home to intelligent aliens? Or could another nearby planet in the same stellar system? The Russian team plan to present their findings next month at the International Astronomical Congress in . I'm interested to see what they have to say. I'm curious to know more about this issue even though, as regular readers will know, I consider SETI somewhat redundant seeing as I'm certain that extraterrestrials have already found us and are here already in the form of UFO's. Source: http://www.space.com/33893-seti-investigates-strong-candidate-signal.html.
See here for background: http://hpanwo-voice.blogspot.co.uk/2015/12/mysterious-stars-shows-signs-of-life.html.
And: http://hpanwo-voice.blogspot.co.uk/2012/10/bbc-conspiracy-road-trip-ufos.html.
And: http://hpanwo-voice.blogspot.co.uk/2012/11/bbc-blocks-brian-cox-over-alien-fears.html.
And: http://hpanwo-tv.blogspot.co.uk/2016/05/ufo-disclosure-2016-probe.html.
Posted by Ben Emlyn-Jones at 18:30

Many thanks Ben for crystallising the various research on this subject, it makes for a very interesting read. (The aside on Cox is brilliant BTW.) Please could you explain for your audience the significance of the 11GHz frequency; moreover, the advantages for an alien civilisation in transmitting at this rate. Regards.

Hi Laurence. You're welcome :-) I'm afraid I don't know. I was quoting Shostak. I'll see if I can find out more details

I look forward to that Ben. All I can add is that the frequency is very high, which may be significant.