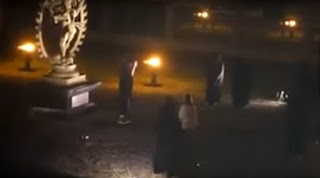 A very strange and frightening video has emerged from CERN, the particle physics laboratory housing the world's largest atom-smasher. I've covered CERN extensively in the background articles below, including the statue of the Hindu god Shiva in pride of place in the courtyard. The video is shot from a window at night overlooking the statue. The area is very quiet and nobody is in sight, as you'd expect late at night. A group of seven human figures emerge from the darkness beyond the frame and take up positions at the edge of the lit patio surrounding the statue. They are all dressed in long black robes with a hood, like an ecclesiastical cowl. They move expertly, as if well-rehearsed and experienced at what they're doing. The cameraman is male and speaks English with an English accent. He exclaims "What the fuck!?" when the figures appear. However his camera is rolling before the figures emerge, as if he is expecting them. He zooms in at the same time as one of the figures steps forward and removes the cowl of another in front, revealing that she is a young woman. She looks naked or wearing a thin white garment. The woman first drops to her knees and then lies down flat on the ground; then one of the other figures draws a dagger from their clothing. They hold it above their head and step forward. They appear to stab the supine woman in the belly. The cameraman gasps and yells with fear. The camera frame wheels as he loses control of his device. He returns to the window for one more brief glimpse that is out of focus, then he flees and the video ends. The whole incident lasts less than two minutes CERN management have admitted that this incident was carried out on their premises, but it was not done with their knowledge or permission. They say that this is a fake reproduction and not a real human sacrifice. They are currently investigating the event and police have been informed. A spokesman said: "CERN welcomes every year thousands of scientific users from all over the world and sometimes some of them let their humour go too far. This is what happened on this occasion." If they're so sure of that, why do they need to investigate? See: https://www.rt.com/viral/356415-cern-shiva-sacrifice-video/. The individuals must have security clearance to have access to the site and therefore are staff or official visitors to CERN. Security at CERN is very tight and even involves optical scanners for the most restricted areas. The subject came up in this week's Mind Set Podcast, see: http://hpanwo-radio.blogspot.co.uk/2016/08/ben-emlyn-jones-on-mind-set-podcast-128.html. It's possible this is just an elaborate prank. Academics and students do have strange practices and set up fraternities with unusual rituals. The cameraman may well be involved, which could explain why he happened to be filming at the right time and in the ideal place to capture the event perfectly. However, based on what I discuss in the background links, something more serious and dangerous might be going on. Perhaps there is real occult activity in this most sinister and potentially destructive location. It's even possible that what we're seeing is a direct effect of interdimensional intrusion caused by the operations of the Large Hadron Collider itself. In other words, the figures are men-in-black type entities from beyond our universe. Time will tell. Hopefully there will be an update soon.
See here for background: http://hpanwo-tv.blogspot.co.uk/2015/07/cern-progress-or-apocalypse.html.
And: http://hpanwo-radio.blogspot.co.uk/2015/06/programme-142-podcast-cern-special.html.
And: http://hpanwo-voice.blogspot.co.uk/2015/06/lhc-data-tap-on.html.
And: http://hpanwo-voice.blogspot.co.uk/2015/12/cern-friday-13th.html.
And: http://hpanwo-voice.blogspot.co.uk/2015/05/mystery-object-found-inside-lhc.html.
Posted by Ben Emlyn-Jones at 17:13

Hi Ben,
It's certainly an interesting video. We know, and you have described previously in some detail, that there is clear evidence of a sinister force(s) at work within and around CERN and the whole project is to be regarded with deep suspicion. However, I feel with this video, there are too many unknowns associated with it to enable us to draw any conclusion as to its veracity. It could be a prank, could be genuine, or...and this is my personal view, it could be a deliberate plant; We know that the establishment is constantly fighting a rear-guard action in order to stop the truth from see the light of day. It is a cheap and effective tool for them to plant such videos from time to time as a kind of 'honey-trap' for people such as ourselves who actively seek the truth behind nefarious activity. In such manner individuals or groups of 'conspiracy theorists' can quickly be discredited, sometimes even ridiculed in the MSM, when they decide to openly debunk the issue.
BW

Thanks, Neil. Deliberate plant had not occurred to me and it should have. It's true, there's no way to know right now. I wonder if we'll hear any more from CERN's management.