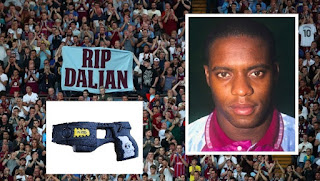 The taser is supposedly a "non-lethal" weapon. It was adapted from a torture device banned by the Geneva Convention and is now used by police forces all over the world. It works by projecting a pair of darts connected to a high-power battery. The darts deliver a debilitating electric shock that causes temporary paralysis and unconsciousness. Since its introduction in the early 2000's, over a hundred people have died as a direct result of being attacked with this weapon. The latest was Dalian Atkinson, a forty-eight year old former footballer. He had been a fit man, having played for Aston Villa during the 1990's. Sadly he recently developed kidney problems and had been undergoing dialysis. This had made him very depressed and unstable. The police were called at Monday morning to a disturbance at Atkinson's father's house in , . They shot Atkinson with a taser and his heart stopped. This is not an uncommon cause of death among taser victims. Also survivors of taser attacks often suffer permanent nerve damage causing pain, convulsions, paralysis and loss of bodily control. People who live through a lightning strike often are left with the same symptoms. Taser shots can also damage the brain, causing confusion and memory loss. Dalian Atkinson was pronounced dead an hour and a half after being tasered, see: http://www.bbc.co.uk/news/uk-england-37082207. I don't know what the coroner's report will be for this incident; but whatever the circumstances, the use of this weapon as a suitable method of law enforcement will not be questioned. You might say: "Well maybe Atkinson was really violent towards the police or another person!" So, what's wrong with the good old truncheon and restraining techniques? They worked before, why not now? I've heard of tasers being used on people who are not even violent. Somebody is a wheelchair was once tasered. Is this legitimate policing? Ironically the trial has just ended of the murder of Sadie Hartley, a woman who was stabbed dozens of times after her assailant, Sarah Williams, stunned her with a cattle prod, a very similar weapon to a taser, see: http://www.bbc.co.uk/news/uk-england-lancashire-37105035. RIP Dalian Atkinson. Deepest condolences to his family, friends and fans at Aston Villa.
Posted by Ben Emlyn-Jones at 20:16

Thank you Ben for bringing news like this to a wider audience. The empathetic take on a terrible tragedy is much appreciated as an antidote to mainstream reporting.

You're welcome, Laurence. It's a terrible thing to happen and a warning to us all.