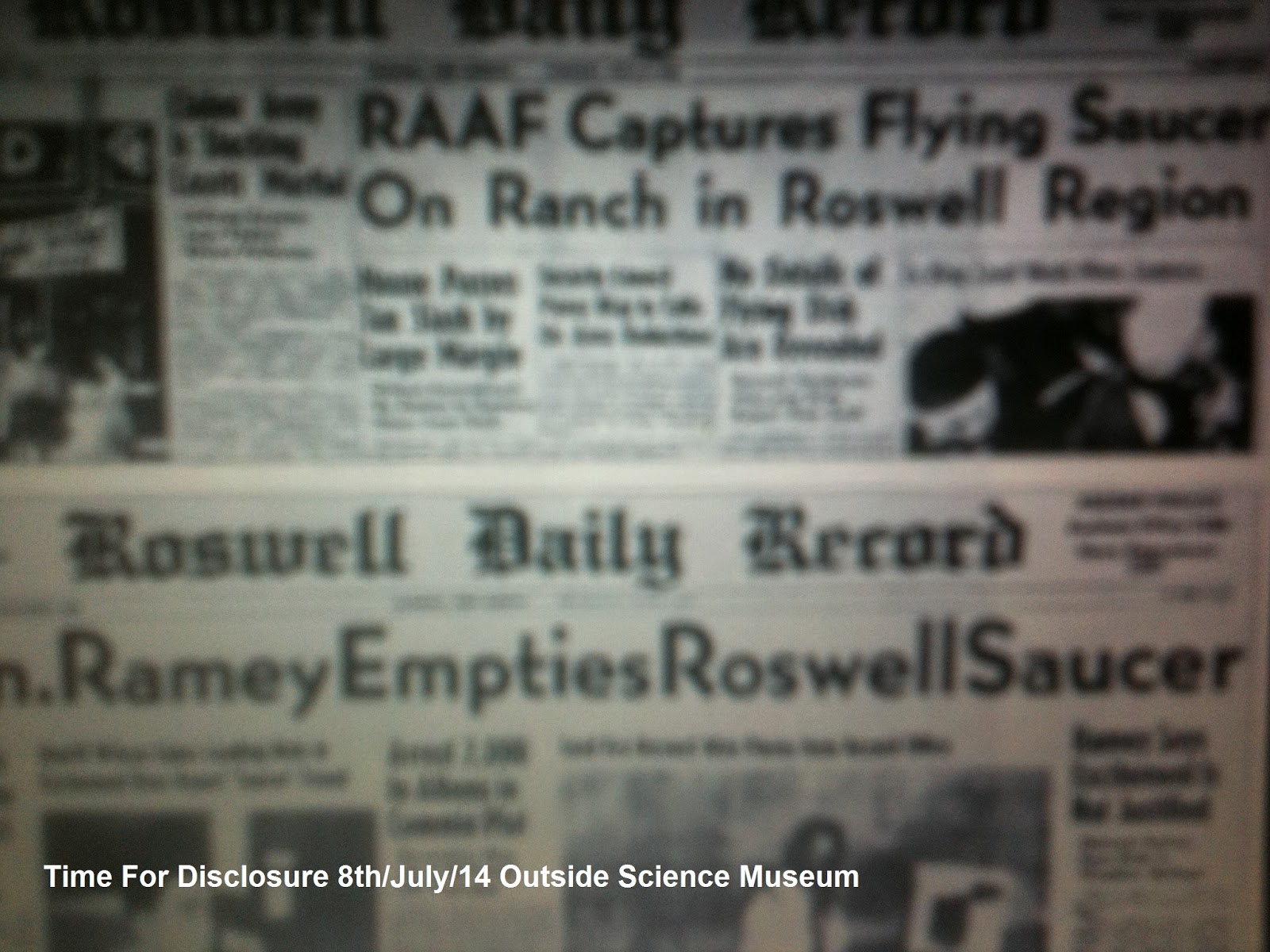 July the 8th is World Disclosure Day. This is an initiative by the Paradigm Research Group in its campaign to persuade the governments of the world to acknowledge frankly and fully the existence of an extraterrestrial intelligence engaging the human race. On July the 4th a strange flying object came to grief on a remote ranch near . It was quickly salvaged by the Roswell Army Air Force. The announcement was made in the media that they had "captured a flying disk". However on General Roger Ramey called a press conference at where he changed the official position of the Roswell Incident saying that there was no strange object; all that had been found was a weather balloon. For the PRG this marks the beginning of the sixty-seven year "truth embargo" as the existence of UFO's and aliens beings. The moment Disclosure takes place the date of World Disclosure Day will switch to the date on which it happens and it will be celebrated thus every year afterwards, see: http://www.paradigmresearchgroup.org/WDD_Registration.htm.

There will be an event in this year to mark World Disclosure Day. Outside the , beginning at , there will be a street pageant including a peaceful protest and activities to educate passers-by and the media, organized by my friend and activist Heidi King. There will also be HPANWO TV coverage and a recording for the HPANWO Show on Critical Mass Radio. In Heidi's own words: "It was on a disk was reported flying and crashed into the desert; and as to mark the anniversary I am holding a demand for action to bring Disclosure to the hiding of existence of UFOs. It is also important that the public know about antigravity technology and free energy which UFOs are based upon. The planet is now at risk because of the dirty technology we are still using for air and space travel. I think the idea of rockets should be discarded. I would like anyone who can come to the platform and have their say. What better place to hold it outside the . I want as many people to dress up in fancy dress as an alien of your choice so the public will se what's going on. Also bring with you banners, flyers, DVDs related to this subject to wake the masses up." Here is the Facebook event page, please click the Join button to add your name to the list of people going.
See here for my CMR interview with the PRG's executive director, Stephen Bassett: http://hpanwo-radio.blogspot.co.uk/2014/02/programme-podcast-77-stephen-bassett.html.
See here for more essential background: http://hpanwo-tv.blogspot.co.uk/2012/08/disclosure-city-people.html.
Posted by Ben Emlyn-Jones at 18:43