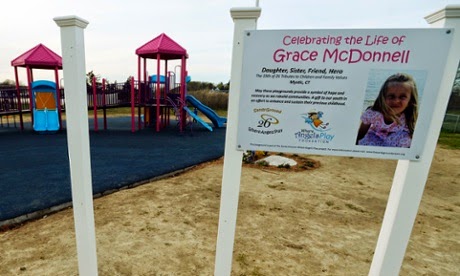 Two memorial signboards dedicated to the alleged victims of the Sandy Hook Massacre has been vandalized. One of them was ripped from its mountings in Mystic, , a short distance from . Somebody then phoned up the parents of Grace McDonnell, the girl the sign was dedicated to, and taunted them, claiming to be the vandal. He accused them of being part of the conspiracy, saying that their daughter never existed and that they were both frauds. For anybody who doubts the official story of , as I do, this kind of behaviour is extremely counter-productive. I urge everybody not to do it. It's exactly what the media want, and they have not missed this opportunity to almost hyperventilate in their tirade against " truthers!", to hang up a strawman of evil that the viewer can hurl their shoes at. Right now, anybody who meets somebody who doubts will remember these news stories and tar that person with the same brush; "What!? You must be one of these people who desecrates children's memorials, aren't you!" And the person they're addressing will find it hard to explain their true position. In fact it wouldn't surprise me if this was some kind of mini-false flag; that somebody in the authorities organized the vandalism and the phone-call in order to demonize anybody who questions .
Source: http://www.dailymail.co.uk/news/article-2628377/Sandy-Hook-truther-tells-victims-mother-daughter-never-existed-shooting-hoax-vandalizing-playground-named-little-girls-honor.html.
See here for essential background to the Sand Hook incident: https://www.youtube.com/watch?v=oqu5Yu6AdQY.
Posted by Ben Emlyn-Jones at 19:02