Colin's Elbow in the Ribs 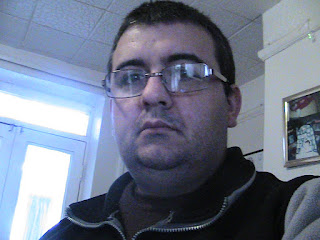 Colin Snuggs is a pianist and skeptic from who was once a long-time contributor to the HPANWO Forum, see link column, where he went under the username "Beetzart". I banned him a few months ago for one reason and one reason alone: his conduct. He will deny it and claim I banned him for being a skeptic, but that's rubbish. One of his last forum posts was: "I know full well that you refuse to be told what to write but how about you broaden your scope a little. Why not look into the civil wars in , , and ? Oh I suppose there are no UFOs there or crop circles. You narrow minded fool." This was the last straw in a long series of escalating insults and attacks he made on me and other forum members. Since then he has rejoined under a number of sock-puppet accounts, but he's such a bad actor it takes me no time at all to spot him. What's more he sometimes tries to post comments on my articles. He has his own website called "Colin's Elbow" where he posts about what he calls "woo woo", a skeptic nickname for all things non-skeptic. He talks about thing like: "perhaps Google is a front company for aliens.  Gathering information and surveying the planet.  Totally absurd I know.  I will make it clear I don’t accept ideas as fact without compelling evidence but I don’t mind hypothesis.  People make a living out of telling people what they want to hear no matter how ridiculous it is, like saying the Queen is a reptilian shape shifter or religious nuts." See: http://www.colinsnuggs.co.uk/. I found him very frustrating to talk to because I would try to reply to him in a rational manner and he would just descend into rhetoric, refusing to answer my points and then claim he had proven me wrong! Now I find that he has started a new YouTube channel that seems to be dedicated to lampooning and disparaging this humble author, see: https://www.youtube.com/channel/UCuDPoTdYyRiqkfGYjC-uFnQ. I'm tempted to lie and say that the embarrassing photo in the avatar is photoshopped, but it's not. It's a still from a joke video I made many years ago, now deleted, when I was active on the official David Icke forum. It was traditional there to celebrate the publication of one of David's new books by making images of ourselves based on the famous I Am Me- I Am Free cover, see: https://www.davidickestore.com/en-gb/product/i-am-me-i-am-free-by-david-icke/. The name "Roid Freedom" comes from a Facebook group Colin and I used to belong to called "Everybody Loves David Icke" and its perennial witticism was that David Icke apparently suffers from haemorrhoids.

Colin's attitude towards me is very strange. It's obvious he dislikes me intensely and considers my work on HPANWO foolish and contemptible. There are people I feel the same way about, although I don't feel the animosity towards Colin that he does towards me. However, when I do I tend to avoid them, keep them away from me and only even discuss them for therapeutic reasons, for example see: http://hpanwo-tv.blogspot.co.uk/2012/09/centaur.html. Yet Colin's antipathy for me has inspired some sort of morbid obsession. For instance, in this video he makes it clear he is still lurking on the HPANWO Forum, one from which he has been permanently banned: https://www.youtube.com/watch?v=aRY46WIv9ks. He also carried out a live vigil in the run up to my skeptic talk at New Horizons St Annes, see: https://www.youtube.com/watch?v=4EYKXwSA2g0 (See here for a recording of it: http://hpanwo-tv.blogspot.co.uk/2016/07/skeptics-who-are-they-why-are-they.html). Some of his spoofs are quite artistic, see: https://www.youtube.com/watch?v=7lGaNnw8vqw. I am honestly confused over this. Should I feel insulted or flattered? I don't think Colin is a malicious man. We used to get on alright in the early days. It's obvious that I give his life meaning and that's good to know. In fact if it wasn't for me, what would he do with himself? He is driven to arms by his opposition to me. Maybe he's not completely pathological. He does have other interests that are helping him break his addiction. For instance he is a keen piano player; in fact one of his forum nicknames was "the Dover Liberace". He also likes football and supports Dover Athletic FC. So I wish him well. Maybe in a few years he will have got me out of his system and when somebody asks about me he will say: "Ben?... Ben who?"
See here for more information: http://hpanwo-tv.blogspot.co.uk/2016/08/michael-shermer-update.html.
And: http://hpanwo-tv.blogspot.co.uk/2016/05/andrew-copson-at-greenwich-sitp.html.
And: http://hpanwo-tv.blogspot.co.uk/2013/07/sally-morgan-skeptic-fail.html.
Posted by Ben Emlyn-Jones at 18:32

That's not the most accurate blog, Mr Jones. Are you ridiculing me by trying to make out my opposition to your claims are just stupid? You're the one who threw the resin in the Thames in an undisclosed location so the Men in Black wouldn't fish it out. Need I say anymore? I bet you wouldn't treat someone like that who gave you money and help all the time would you? If you are going to make extraordinary claim you should provide extraordinary evidence. And you should expect people to counter your claims, which I have done.

YOU are accusing ME of ridicule? Everything you do is about ridiculing me

You seemed to have missed my point. You are the one who makes the extraordinary claims without any evidence, like I have stated. Ridicule is the only option available until you correct this. Also, at this juncture you might like to clear up the passport issue as well.

And you are ridiculing me by belittlement. As if I am a mere fly on the back of a mighty lion.

Ben mate I'm not involved here but it seems to me that you don't debate with people. You come out with stuff that is often absurd and you claim in this article that woo-woo is anything that is non skep. That is like saying something is only defined by what it is not which is simplistic rubbish. You should do a part time university course to give you discipline

Colin, why don't you post under your real name? I DO provide evidence for my claims and all you do is reply "hot piff" or ignore me. As for the passport issue? You know my feels on that. Have you been talking to Paul Armstrong on FB?

And you, "Anon", should ask your real identity, Colin, why he is pretending to be more than one person. ;-)

I thought you would respect someone's right to remain anonymous. I'm writing a dissertation on the conspiratorial community for my sociology degree from a perspective of emerging sub cultures and belief systems. I'm interested in how conspiracy folk reject the scientific method and place the burden of proof on the rejecter. Have you heard of Bertrand Russell's teapot? I should Wiki it if you haven't

You really think you are something special don't you? Why are people not allowed to criticise you especially with the wild claims you make? Remember the resin in the Thames incident? How did that experiment go by the way? Anyway, it looks like I'll have to do another vlog to get my side of the story across, again.

People are perfectly entitled to criticize me. I know about Russell's teapot; It's like Dawkins' flying spaghetti monster or the pink unicorn etc. It just annoys me when I reply to you and you carry on as if I haven't said anything.

I'm glad you know about these things. In terms of epistemology don't you think rigour is essential for how can we determine if something is objectively real unless we have a verifiable scientific method? The conspiracy community tend to use intuition and rumour and it seems to me that they believe things that they wish were true. Children do this but only the scientific method of starting out with a null hypothesis which is tested and only if found something exists is evidence built up through accretion

Anon, I think that's an inaccurate assessment. If anything it's conspiracy skeptics who tend to assume intuitive and rumoured tales of the official story are correct and ignore the null hypothesis. The recent work of Prof Karen Douglas is well worth examining. You may well enjoy my forthcoming public debate with Colin.
(I deleted your second impatient comment).

OK but you ignored my question on the need for rigour and what methods you employ to make sure something is objectively real and not just wishful thinking?

I deliberately ignored your question: "...don't you think rigour is essential for how can we determine if something is objectively real unless we have a verifiable scientific method?" because I consider it unnecessary. It kind of answers itself in the article, with what I wrote on the 25th line. I'm surprised you failed to understand my point because I believe it is perfectly clear.

Hmm I can't see how you address rigour and method in that article on Colin's Elbows. My research tells me is that conspiracy types are anti science anti rationalist and readily accept spurious information they deem as "esoteric" presumably to set them apart from "the sheeple" to confer feelings of superiority. They start from the premise that something exists and then cherry pick what they see as "evidence". David Icke calls himself a "researcher" yet he doesn't seem to know what real research is. If someone tells him that they saw a member of the royal family shaprshift into a lizard then he believes them because he wants to believe, he needs to believe, his industry depends on disseminating stuff like that. Maybe with the end of organised religion David Icke type conspiracy theories address that other worldly need that some people have. I'm interested in this sub culture that rejects reason and I see it as a form of mass hysteria.

glad you agreed to a debate with colin , looking forward to it - it has to be better than the letdown that was bedroom loser bolerhatman

I have looked at this Colin chap's blog and I can relate well to him as though we speak the same language. He is pro science as I am and he clearly has no time for people who make wild claims and reject the need for evidence. I would love to see this debate too and be great if you two debate scientific method or at least address it. I hope Ben that you dont evade it as I feel you have with my questions to be honest mate.

Unfortunately Ben there are people like Colin who try to bring down and rui other peoples work, either because they are:
Jealous
Feel threatened
Close minded
Stupid
Stalker like minded
Weird
Bored
I have been at the forefront of such idiotic and ridiculous behaviour from the Canadians n Ontario, but then they now know not to do this because Karma is a very real thing....
Ignore him Ben he won't gain anything from it.

Why is Colin Snuggs posting as 'ANON'...

If I try to evade it you have a record here of my dishonesty. I'm quite looking forward to it actually. I'll be perfectly civil to Colin, just as I was to the other skeptics I've had public debates with.

OK fine but may I ask why you
didn't publish here a polite question on science and skepticism that I posted this morning?

And I'll be civil to you, too. But I will wish to ask you questions about your ideas and what evidence you have to confirm them as possible theories. Let's get this things going. How about a Skype chat on Friday evening when me boys have gone to bed, 9pm say? Promise I will not swear or use ad hominem. I can behave when I need to and I don't want to give you an excuse to terminate the conversation. Fair enough, yes?

Anon, I have published all your comments. I don't know what you mean.