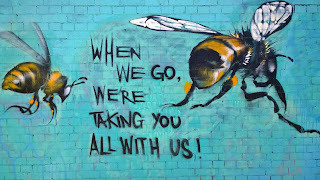 The disappearance of bees, officially called CCD- “Colony Collapse Disorder”, has been worrying many people for a long time, both inside the alternative Truth community and outside it. Beekeepers have noticed that their hives are being ruined. The bees have not died, or at least not died in the hives; they have just left them deserted. A large proportion of the world’s bees have simply vanished and this disquieting epidemic has now spread right across the face of the Earth. Bees are not only delightful creatures in themselves; brightly-coloured herbivores which buzz melodically on warm summer days and provide us with that miraculous substance honey, they are an essential part of the food chain, both natural and agricultural. Their hard work props up human civilization as well as the rest of the biosphere. Albert Einstein even warned that “if the bee disappeared off the surface of the globe, man would have only four years to live”. The real cause of Colony Collapse Disorder has not been agreed on, but many factors have been blamed: cold weather, climate change, GM crops, mobile phone transmissions, pesticides and the outbreak of a parasitic mite called Varroa. CCD is probably the combined result of several or even all of those factors, but the best evidence so far points to the use by farmers of a class of insecticides called Neonicotinoids. So much so that in the end the European Union banned them in 2013. The BBC have covered CCD, however this programme predictably misleads and distracts from the real story, see: http://www.dailymotion.com/video/x1z4m5o_what-s-killing-our-bees_tv.

"Neonics" were originally produced by Bayer, Syngenta and other biotech-agrochemical companies as environmentally friendly. After the banning of DDT in the 1960's following the scandal caused by the book Silent Spring by Rachel Carson, an alternative was sought after. Neonics were originally welcomed by the environmentalist community because they're scattered in small pellets, not sprayed, so birds and mammals can't come into contact with them. The pellets dissolve in the soil and are absorbed by the crops directly through the plants' roots. Because neonics are only present in the plant's body it is thought that they only target parasitic insects like greenfly and locusts which bite and suck the plant directly; everything else would be left alone. The chemical works by crippling the insects' central nervous system and causing paralysis and death, a kind of artificial version of the "Dementor wasp", if indeed it is artificial, see: http://hpanwo-voice.blogspot.co.uk/2015/06/zombie-wasps.html. Since its introduction though, the world has been struck down by disappearing bees and neonics have been banned. It appears that the bees ingest the chemicals while foraging flowers and this gives them amnesia. They then can't remember the way home to their hive and just fly round in circles until they die. However an appeal by a recent deputation from the National Farmers Union has resulted in the EU government suspending the ban for three neonicotinoid pesticides in four English counties, for oil seed rape fields. The NFU hope that the end of the moratorium on neonics will become permanent, more widespread and nationwide, see: http://www.fwi.co.uk/news/four-counties-to-be-granted-access+to-neonicotinoids.htm. I wonder what influence Codex Alimentarius have had on them lately; see link below to Ian R Crane's video. The NFU argue that the ban was only ever precautionary to begin with; and they counter the conclusion of the studies showing that neonics harm bees. Neonics have been a great economic blessing for farmers, increasing their crop yields and reducing costs. British farmers have been struggling financially for years due to the recession and a series of mild summers. The NFU also champion the original advantages of neonics, that they don't harm animals other than parasitic insects. However, as is often the case, birds, fish, amphibians and mammals eat the insects effected and are poisoned that way. Once the chemical is in the food chain it is soaked up by all members of it; including eventually humans of course, see: http://www.soilassociation.org/keepbritainbuzzing/gclid/cjzy4dhg_cycfazitaodrwao7a. I'm very concerned by the lifting of the neonicotinoid ban, even though it was up for review at the end of the year anyway. It just goes to show how little national sovereignty the , the former-United Kingdom of and , has. Along with so much else, the EU controls what substances we put on our own land. At the same time I'd like to see moves afoot to tackle the other suspected causes of disappearing bees, like electrosmog, GMO crops etc. Also effort should be made to find non-toxic alternatives to current agrochemicals, Terra Preta for example, see: http://hpanwo.blogspot.co.uk/2008/06/terra-preta.html. Some American farms now fight pests simply by encouraging the increased presence of their natural predators, like ladybirds. I can't help wondering if the destruction of the honey bee is part of what Ian R Crane calls the "War on Terra", see: http://hpanwo.blogspot.co.uk/2008/10/ian-crane-war-on-terra.html (This lecture is now online, see: https://www.youtube.com/watch?v=yMRRF5j8Wso). I can't prove that this is not simply another coincidence, but right now my "conspira-dar" is telling me otherwise.
See here for a related article: http://hpanwo-voice.blogspot.co.uk/2014/02/zombie-bees.html.
Posted by Ben Emlyn-Jones at 19:21