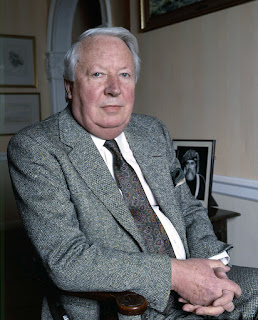 An article appeared on the BBC yesterday; for some reason it's on the news website. It is not news. "News" derives from the word "new" because it by definition is new information. This article is about old information that was revealed many years ago. It was revealed by a former TV sports journalist called David Icke in a book called The Biggest Secret (Bridge of Love 1999) David was ignored. He had not been in the limelight for a while since he was laughed at and jeered by the studio audience during the Wogan programme, see: https://www.youtube.com/watch?v=Y2MEN4-49dM. The accusations appear in a chapter of the book entitled "Satan's Children". A woman describes how she was brutally raped by a man. The man stripped her naked and ripped her flesh with hooks. She was just a young girl at the time and this happened on more than one occasion. Another woman was the wife of a staff member at the Burnham Beeches nature reserve and she witnessed the very same man leading a satanic ritual there. He shape-shifted into a reptilian humanoid as she watched. The man's name was Sir Edward Heath and he was the Prime Minster of the from 1970 to 1974. He was one of the leading figures in the Bilderberg Group and entered into the European Union. These allegations were presented to Edward Heath by a journalist soon after The Biggest Secret was published. Heath returned the book to the journalist saying: "I hope Mr Icke recovers from his illness soon." Didn't he think he should sue David Icke for libel? He could have had the book banned. The lawyer and political activist Richard Warman did that to David a short while ago over far less serious charges, see: http://hpanwo-voice.blogspot.co.uk/2015/03/david-icke-loses-lawsuit.html. Why didn't Heath? David met Edward Heath once at a BBC studio. They were both in makeup getting ready to go on camera. David greeted the former Prime Minister politely. Heath did not reply and just glared at David. David reports that the man's eyes turned into black holes and David got a feeling of extraordinary evil radiating off the man.

And now the BBC are reporting that Sir Edward Heath is suspected of crimes including the rape of a twelve-year old boy. Heath might have been a child-abuser, as if the BBC are so very clever to have found such scoop which nobody has ever heard of before, see: http://www.bbc.co.uk/news/uk-33770021. Four police forces, from , Wiltshire and the , are currently investigating these allegations. These are part of the "historic" child abuse allegations that we've seen so much of recently, see background links below. What "historic" means in their Orwellian doublespeak is: "We didn't do anything at the time because we wanted to wait for the suspects to die. The world just can't cope with the scandal." Heath himself died ten years ago. So far no living VIP in political world has been prosecuted for historic child abuse crimes. The ones still alive have escaped justice through various tricks, such as pretending they can't face the courts because have dementia like Lord Janner. What's not surprising but also amazing is that there has been no official apology to David Icke. As with the Jimmy Savile situation, which David also predicted long ago, they're just raising their hands in mock astonishment and saying: "Blimey! We had no idea!" Pull the other one. So a British Prime Minster, Sir Edward Heath, is finally being exposed for the monster he truly was... Finally is a terrible understatement.
See here for background: http://hpanwo-voice.blogspot.co.uk/2014/11/still-no-mr-fixit-for-child-abuse.html.
And: http://hpanwo-voice.blogspot.co.uk/2014/07/did-thatcher-cover-it-up.html.
And: http://hpanwo-hpwa.blogspot.co.uk/2014/06/jimmy-saviles-hospital-crimes.html.
And: http://hpanwo-voice.blogspot.co.uk/2015/02/new-judge-for-child-abuse-inquiry.html.
Posted by Ben Emlyn-Jones at 17:07

yes .... Pedophilia would be a major attraction to psychopaths and the like. Also as a method of entrapment and recruitment.

but we cannot expect puppet democracy and puppet media to do anything meaningful. We should not complain "they are doing nothing". By complaining to that which does nothing is to give psychic deference to it. We should simply abandon our trust in corporate ruled democracy. It is that simple. It is that corrupt.

Democracy is a bed time story like santa claus and the tooth fairy. It enables people to sleep easily. It enables them to replace true spirituality with an alternative mythical narrative..... but one that is controlled by resources, law, money and media.