Russia- "Disclose UFO's or WE will!" 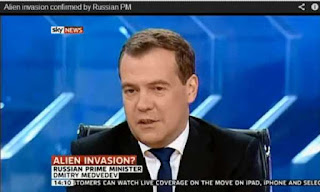 I've often said in the last few years that is where it's at. By that I mean many things and UFO's are one of them, see background links below. It has been reported that there was some drama at a meeting in recently when the subject of extraterrestrial life came up. The incident allegedly took place at the World Economic Forum, an annual conference which is hosted in the luxury resort (of course!) of and is attended by many of the world's top statesmen, business leaders, academics and journalists. David Cameron and Angela Merkel were there. The Russian Prime Minister Dmitry Medvedev has apparently issued a stern warning to the United States of America, which is the centre of the UFO "Truth Embargo", as Stephen Bassett calls it, see here for details: http://hpanwo-radio.blogspot.co.uk/2015/02/programme-125-podcast-stephen-bassett.html. This was written in a report published by 's Ministry of Foreign Affairs. President Obama must initiate Disclosure- with a capital D, or will do so unilaterally. As most exopoliticians agree, this would be an enormous blow to the 's credibility on the world stage. However, is this story real? There are numerous mentions of it in the alternative media, for example see: http://in5d.com/russia-orders-us-tell-the-world-about-aliens-or-we-will/, but there are no valid source documents. I searched under the terms "UFO" and "aliens" on the English language section of the Russian Ministry for Foreign Affairs website and came up with naught, see: http://archive.mid.ru//brp_4.nsf/main_eng. If this report was written and published, it has obviously since been withdrawn. This story supposedly took place over two years ago and nothing has happened since.

I wonder if the subject of UFO's and ET Disclosure came up at the World Economic Forum because during the conference there was a session where the delegates discuss "X-factors". This doesn't mean they all get up on stage and see who can sing the best; it means they venture into speculative futurological subjects and try to work out what will happen as a result of them. At this meeting they tabled the possibility that extraterrestrial life might be discovered. This is a distinct likelihood in today's world, seeing as we have sophisticated probes exploring Mars and telescopes looking for organic chemicals on exoplanets, planets orbiting stars other than the sun. What effect would it have on society, the economy, culture etc, see: http://reports.weforum.org/global-risks-2013/section-five/x-factors/? As you can see though, the official agenda doesn't expand its scope to consider the possibility that ET life is already known to exist, it is intelligent and it has already arrived on planet Earth; but did the delegates digress during the informal get-together afterwards? The UFO issue might well have come up. As you can see in the link above to my HPANWO Radio interview with Steve Bassett, my thoughts on wiling Disclosure are very divided. My logical side tells me that it can never happen. Like 9/11 and institutional child abuse, UFO Disclosure is probably one of those "bigger than big" secrets; one whose maintenance is quintessential to the current global order. The political structures of the modern world simply do not have the capacity to absorb and process a revelation of that magnitude. However, my heart contradicts my head and I can't help relishing the possibility... but what if...!? Theoretically, if did warn the that it might Disclose without the boss' permission then that is no idle threat. has the largest land surface area of any country in the world and the old was even bigger. At its height, almost twenty percent of the Earth's landmass was draped with the Hammer and Sickle. When that huge communist empire collapsed in the late 1980's and early 90's, there was a haemorrhage of secret files from the newly disbanded Soviet intelligence agency, the famous KGB. This includes some fascinating and compelling information on UFO's, see background links below. There is no doubt that the had a vast and very successful UFO research project. There's reason to believe that post-communist does too. In fact Dmitry Medvedev has inadvertently divulged this, see: https://www.youtube.com/watch?v=zHCSpm2kepo. He said afterwards that he was joking... yes, well I've tried that one too in similar situations.

Could we really see a wildcat UFO Disclosure by ? Could that actually happen? If it were any other country I'd say "no!", but is not doing what it's told by the globalist lords and masters in many other ways right now, see: http://hpanwo-voice.blogspot.co.uk/2015/02/you-really-dont-like-russia-do-you.html. There are many reasons why the world is currently waging a covert war against ... which may become less covert soon. The UFO secrecy issue could well be one of them. There is a precedent in the past too. Sir Eric Gairy was the Prime Minister of Grenada, a small insular nation in the . However he also had a strong interest in UFO's; there has been an on-and-off UFO flap on the island since time immemorial. In the 1970's Gairy approached the United Nations in an attempt to organize an official investigation into possible ET phenomena. Here's a transcript of a speech he gave in the General Assembly: https://www.youtube.com/watch?v=_MegsssaC-A. Gairy held meetings at the UN offices to which he invited the top UFOlogists at the time, people like Jaques Vallee and J Allen Hynek. Maj. Gordon Cooper, the astronaut and UFO whistleblower, also came along. Gairy even wanted the UN to make 1978 the "International Year of the UFO", see: https://iconicphotos.wordpress.com/2009/10/21/eric-gairy-and-ufos/. To begin with everything seemed to be going very well. The Secretary General facilitated Gairy's proposal, but then disaster struck at home and that kyboshed everything. Gairy was deposed in a coup d'etat by Maurice Bishop, who installed a communist regime. Gairy was exiled from his country and his party outlawed. Was it Sir Eric Gairy's interest in UFO's that toppled his government? Perhaps those behind the coup had an ulterior motive. Very damning evidence has come to light that the British tried to undermine Gairy's UFO project at the UN, see: http://www.bbc.co.uk/caribbean/news/story/2011/03/110314_ufo.shtml. If so we must be ready in case something similar happens to today.
See here for background: http://hpanwo.blogspot.co.uk/2007/12/russian-roswell.html.
And: http://hpanwo-voice.blogspot.co.uk/2015/04/disclosure-champagne.html.
And: http://hpanwo-voice.blogspot.co.uk/2014/11/2015-year-of-disclosure.html.
Posted by Ben Emlyn-Jones at 16:10

Ben, we're on the cusp of something I think. I feel it in my water, ha. I just wish something would give BIG TIME. It's
like a sneeze that never happens, so frustrating, lol.

Yes, we need a breakthrough. UFOlogy and exopolitics are stagnating.