A Living Wage at Ikea 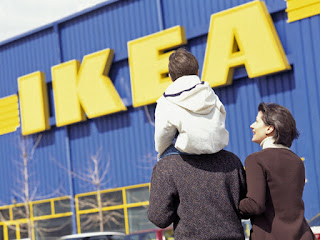 Famous for its flatpacks and lengthy instruction pamphlets, Ikea is the world's biggest furniture store chain. It was founded in in 1943 and today owns 353 outlets in forty-six countries; it enjoys annual revenue of over twenty billion pounds. I regularly visit the Ikea branch at Eastwood, Nottinghamshire with Ustane. We started going there because Ustane wanted to buy items for her home, for example we got a bed for her daughter which I put together myself. However we sometimes go along just because we like the atmosphere of the place. The store has a very happy and creative energy. There's a food hall where you can buy groceries and a self-service restaurant with traditional Swedish meals. I said to Ustane a while ago that I thought Ikea may well be one of the few modern corporations that could persist into the post-Illuminati world. Then I came across a new story that gives me a lot more hope. The Living Wage Foundation, see: http://www.livingwage.org.uk/, has been petitioning all major employers to boost their employees pay voluntarily to a level above the current national minimum wage. Tesco have predictably umed-and-ahed before refusing, while Ikea have agreed. They've also done the same in their stores in other countries. The theory behind the living wage is not just charity for workers; a wealthier population will have more money to spend on items, like those sold at Ikea, so boosting the pay of your employees is good business and good for the economy, see: http://www.theguardian.com/business/2015/jul/20/ikea-adopts-living-wage-uk-staff?. Unfortunately no other major employers have yet followed Ikea's initiative. They would rather pay their workers as little as possible in order to maximise immediate short-term profits. This is not only cruel and greedy, but it can jeopardize long term prosperity for both worker and boss. In a workforce where everybody is living hand-to-mouth because of obsessive wage cuts, at some point there will be nobody left to buy the products these industries manufacture. Also a business staffed by miserable people inevitably declines in the quality of its service. One of the symptoms of psychopathy is only being able live in the present and being unaware of past of future. Could this support the idea that senior positions of authority all attract psychopaths? See here for details: http://hpanwo-voice.blogspot.co.uk/2015/03/being-empath.html. This would explain the attraction for Ikea that Ustane and I feel. The reason it has such a nice energy is that it is an ethical employer. Long may it continue; I'm going there again as soon as possible.
See here for background: http://hpanwo-voice.blogspot.co.uk/2013/09/tory-boy-wants-more-slaves.html.
And: http://hpanwo-tv.blogspot.co.uk/2015/05/tesco-has-fallen.html.
And: http://hpanwo-voice.blogspot.co.uk/2015/03/universal-credit.html.
Posted by Ben Emlyn-Jones at 18:29