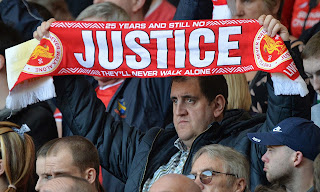 I get utterly sick and tired of people saying: "Conspiracy theories are stupid because there's no evidence for them!" Absolute rubbish. Conspiracy theories often have a mountain of evidence for them and they're covered up exactly the way we "tin foil hat conspiracy nuts!" say they are; through a massive network of secrecy, tacit collaboration and denial. There are many examples of conspiracy theories being proven true and such proof has emerged in the last few years in a textbook example. On the 15th of April 1989 during an FA Cup tie between the Liverpool and Nottingham Forest football teams at the Hillsborough Stadium in Sheffield, a large number of people from the Liverpool contingent entered one of the terraces unexpectedly. The enclosed terrace became so overcrowded that the people inside were crushed under their own collective weight. Almost a hundred people were killed and more than a thousand injured; it was the biggest single loss of life on British soil since the Blitz, and it was all played out on live TV. The original coroner's inquest declared a verdict of accidental death; that the fans themselves had broken into the stadium by forcing a locked gate. The only real action taken were changes to the architecture of new football grounds. However this outcome was seriously questioned by survivors and relatives of those who died. They claimed that the police had opened the gate to let the people in. The police commander at the match that day used to stringently deny this, yet at the court hearing of a more recent investigation into the tragedy he finally, after twenty-six years, confessed openly and without ambiguity, that he had lied. He went on to admit that this negligent action by the police was the direct cause of all the death and injury that day, see background links below.

Andy Burnham is the Shadow Health Secretary and is currently running in the Labour Party leadership contest, see: http://hpanwo-voice.blogspot.co.uk/2015/08/jeremy-corbyn-new-labour-leader.html. He claims that the Hillsborough disaster cover-up goes right to the top; and one of the people responsible was the Prime Minster Tony Blair. Burnham was behind the push to open a new Hillsborough inquiry when Gordon Brown was incumbent after Blair and Burnham laments that this should have happened many years earlier, but Tony Blair had told him to "leave it alone!" Burnham suggests that this is because Blair and the media tycoon Rupert Murdoch were such good friends; Blair is even the godfather of one of Murdoch's children. After the disaster Murdoch's News International Ltd came under fire because of reports published in its flagship tabloid The Sun. During the incident the fans had allegedly panicked and killed each other in their desperation to escape the crush. They has also supposedly attacked emergency service personnel and picked the pockets of the dead bodies. This story was a total fabrication and the people of were understandably outraged. To this day The Sun is rarely seen on newsstands in the city, see: http://www.mirror.co.uk/news/uk-news/tony-blair-rejected-hillsborough-inquiry-6067392. Andy Burnham hails from Merseyside himself and supports Everton. He must hear about Hillsborough constantly from his constituents. Liverpudlians are very sensitive and sentimental by nature; they memorialize all the time and they never forget something like this. Blair had Murdoch to thank for his election victories. It's a well-known fact in that the major turning point in any election is which political party The Sun supports. Blair did not want to upset his journalistic benefactor. Tony Blair has declined to comment on Andy Burnham's accusations. Right now in the midst of the Labour leadership election, for Burnham to launch a sudden personal attack against his main rival Jeremy Corbyn would not be a surprise, therefore what has just happened must be taken seriously. It baffles me why Burnham would make these accusations now; the timing could not be worse. This is after Blair had just slammed Jeremy Corbyn in The Guardian, see link above. Has Andy Burnham suddenly forgotten he's a politician and got his conscience back? Is he trying to throw the election? A more important question should be: has Tony Blair been arrested and questioned?... Of course not. The cover-up of the Hillsborough disaster is not over yet.
See here for background: http://hpanwo-voice.blogspot.co.uk/2015/03/hillsborough-truth.html.
And: http://hpanwo-voice.blogspot.co.uk/2015/02/hillsborough-update-2015.html.
And: http://hpanwo-voice.blogspot.co.uk/2014/09/hillsborough-cover-up-continues.html.
And: http://hpanwo-voice.blogspot.co.uk/2012/10/hillsborough-cover-up.html.
And: http://hpanwo-voice.blogspot.co.uk/2014/02/rob-brotherton-and-psychology-of.html.
Posted by Ben Emlyn-Jones at 18:48