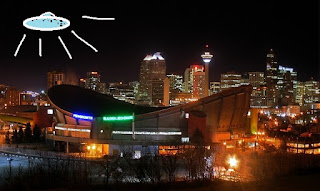 UFO encounters happen all the time, as I have always said. Millions of people have seen them; a sighting will probably have taken place during the time it takes you to read this article. I've seen them myself. I've seen things in the sky maybe a dozen times or more that I can't explain. A couple of those stand out as truly inexplicable, for instance see: http://hpanwo-voice.blogspot.co.uk/2013/06/post-bilderberg.html and: http://hpanwo-tv.blogspot.co.uk/2009/03/my-ufo-sighting.html. However there are other far more spectacular sightings happening now and again; it was only a matter of time before one happened to somebody I know. Trevor Murray is a fellow panellist of mine from the round table talk radio show I do, The Mind Set Podcast. He's also a serving hospital porter so we have a lot in common. In the most recent programme he relates his UFO experience, from 12.00 to 31.44, see: http://hpanwo-radio.blogspot.co.uk/2015/08/ben-emlyn-jones-on-mind-set-podcast-93.html. (The picture above is not an illustration of his report.) It took place at Trevor's home in in , on the evening of the 9th of August. It was ; Trevor and his wife were in the back garden when they saw a single light moving overhead in a straight line at a steady speed. They first thought it was a satellite or the International Space Station, but then it made a right angle turn and sped up. Then about ten minutes later a structured object appeared to the northwest quite low in the sky. Trevor describes it as being round like a "dimmer light" and was an estimated 1,600 feet away; but ranging objects in the sky is not easy, therefore so is judging their size. The lighting of the object rose and then faded away in about six seconds. It was blue white in colour and very bright. In a way these are two separate sightings, but they happened so close together in time and space that it's reasonable to assume they were connected. If you go online you'll find there has indeed been quite a lot of strange apparitions in the sky recently in that area, see: http://ufoplanet.4u2ctv.com/tag/calgary/. Whether this is related to the recent Disclosure Canada conference tour is a matter of conjecture, see: https://www.youtube.com/watch?v=h6I9ksoN7bA. Canada is a major centre for UFO awareness thanks to people like Wilbert Smith and Paul Hellyer, see: http://hpanwo.blogspot.co.uk/2011/11/who-is-wilbert-smith.html and: http://hpanwo-voice.blogspot.co.uk/2015/07/hellyer-checks-evidence.html. Trevor and his wife were quite alarmed by what they'd seen and during the night they were afraid that their two-year old daughter might be abducted by the aliens. These feelings add a lot of credibility to his story in my view. What Trevor experienced in UFOlogical terms was a close encounter, something I've never had myself. On the Hynek scale his would be classified as a "close encounter of the first kind" This is defined as "Visual sightings of an unidentified flying object seemingly less than five hundred feet away that show an appreciable angular extension and considerable detail". Trevor's estimate of distance is slightly further than that limit, but, as I said, it's difficult to range objects in the sky so it would be pedantic to say that for this reason his sighting was not a CE1, see: http://www.daviddarling.info/encyclopedia/C/closeencounters.html. I can't think of any explanation for my brother porter's sighting, even taking the two phases of it separately. Together this makes a highly unusual and interesting case. The fact that there were two independent witnesses also makes it significant. I have recommended to Trevor and his wife that they ask their neighbours if they saw anything, and to report it at one of the many organizations that run such a service, for example MUFON- the Mutual UFO Network, see: http://www.mufon.com/report-a-ufo1.html or Richplanet, see: http://www.richplanet.net/report.php.
Posted by Ben Emlyn-Jones at 18:20

I love this stuff Ben. I just LOVE it!

Thanks, Tino. Keep watching the skies!