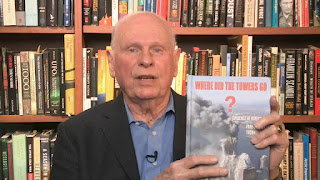 The Rt. Hon. Paul Hellyer MP, a former defence minister for , is one of the most high-profile people to speak out about the UFO issue. He described the phenomenon as being "as real as the aircraft that fly over our heads". Today, at the grand old age of ninety-one, he is still active in the world of exopolitics, a regular speaker at conferences and producing films on UFO encounters. One thing that I've noticed in UFOlogy is that there are different factions in it with often very diverging viewpoints on matters both within and related to UFO's. There are those who want to see UFO conspiracy as distinctly separate from other conspiracy theories and are very careful to avoid connecting UFO's to anything conspiratorial outside them. Timothy Good is one of these, and much as I respect him I think he's making a mistake. I have definitely planted my flag on the idea that UFO's are just one part of a far greater and more widespread set of issues. The most common gripes centre around the subject of 9/11, in fact Bryce Zabel, the screenwriter of the UFO-themed TV series Dark Skies and co-author with Richard Dolan of AD- After Disclosure, wrote an article called "UFO's and 9/11 Truth should not Mix", see: http://hpanwo-voice.blogspot.co.uk/2015/06/911-truth-meeting-in-london.html. As I explain in that linked post I totally disagree with him. It does seem like 9/11 is a taboo subject at most UFO events and even those who are open to the idea that the 9/11 event was a false flag attack are reluctant to talk about it. The word "taboo" has been used by Andrew Johnson in a recent article he wrote and he notes how the UFO community is not addressing issues that he thinks it should. Stephen Bassett once said that the technology back-engineered from the salvaged wreckage of crashed flying saucers had been developed into weapons systems. He right, but doesn't go far enough. He doesn't address the scientific study on the matter by Dr Judy Wood. One of these weapons was used to destroy the World Trade Centre on ; whether it came from extraterrestrials or was developed by humans here on Earth makes little difference in this context.

However we now have an admirable exception, Paul Hellyer. In a video he made a few months ago called Full Disclosure, the former Canadian government official holds up a copy of Dr Judy Wood's book Where did the Towers Go? and states: "A new weapon of mass destruction was used to reduce the concrete and steel to dust before it reached the ground. If you have any doubts about this, get a copy of Dr Judy Wood’s book entitled Where Did the Towers Go?; five hundred pages of meticulous evidence." Andrew Johnson reports on this here: http://www.checktheevidence.com/cms/index.php?option=com_content&task=view&id=412&Itemid=60. Andrew suggests that others should follow Mr Hellyer's example and break through the "taboo of Disclosure" as Hellyer has done. He says: "I hope that they will do what they have not done yet: accurately report the evidence we know as the truth (sic) and accurately describe the implications of it." So far this has not happened and this has frustrated Andrew, understandably. It has also made him suspicious of some individuals, see: http://www.checktheevidence.com/cms/index.php?option=com_content&task=view&id=262&Itemid=60. I suspect that Dolan may have simply come down with a failure of nerve and imagination in the face of pressure from the "thermitically correct" brigade who have claimed ownership of the first layer of alternative 9/11 ideas; turn away from the TV and you hit the thermite. I hope Dolan will be inspired by Paul Hellyer to resist in future; if he doesn't then we must indeed ask: why not? Andrew's right that the weaponization of esoteric energy technology is an essential matter to get to grips with in order properly to comprehend exopolitics, for many reasons which I'll detail in future articles and also cover to some extent in the background links at the bottom of this post. Personally I think the above is just one of many taboos the UFO community is suffering. Another is willing Disclosure, an issue over which my heart and head are still battling it out, see: http://hpanwo-tv.blogspot.co.uk/2015/03/ufo-disclosure-2015-doubts-begin.html.Robbie Graham has spoken out about this matter in a radical way at an event in , see: https://www.youtube.com/watch?v=8N-SImMAPLo (He also did so at the 6th Annual Leeds Exopolitics Expo last year, but the video of this is not yet available). Another extremely contentious subject is the possibility that the Apollo moon landings were faked. This is another subject in which I take a decisive side; I think they were faked. Last year I related my beliefs to a friend of mine, a UFO researcher from the , and he replied in no uncertain terms that I was insulting thousands of great American heroes. Luckily this chap is very easy-going and so we're still friends; but it just goes to show that somebody can believe in an all-reaching overarching cover-up on a vast scale when it comes to one level, yet vehemently reject governmental deceit on another level in a surprisingly establishment manner. In fact Dr Steven Greer and Richard Hoagland declare that virtually everything is fake... apart from the moon landings. The UFO subject is intimately and inextricably connected to man's exploration of space. This is one of the reasons why there was a secret space programme (q.v.) So there is still a lot of baggage to cope with when one gets involved in UFO research. We've been very famously told "It's not about lights in the sky: it's about lies on the ground", but perhaps it's also about hang-ups in our own heads and prohibitions in our own culture.
See here for background: http://hpanwo-tv.blogspot.co.uk/2015/05/ufo-disclosure-2015-roswell-slides.html.
And: http://hpanwo-radio.blogspot.co.uk/2015/02/programme-125-podcast-stephen-bassett.html.
And: http://hpanwo-bb.blogspot.co.uk/2015/07/aurora-novel-of-disclosure-sample-first.html.
Posted by Ben Emlyn-Jones at 18:36

Thanks for referring to my article, Ben! There is more info on what Richard Dolan has said in this article:

Of course, this refers to events now 6 years old, but in the Hellyer article that I wrote, I also refers to one of Dolan's latest talks and he does not talk about the use of the weapon system on 911....

You're welcome, Andrew. Good article :-) Let's hope the brave lead shown by Mr Hellyer catches on with others in our community.