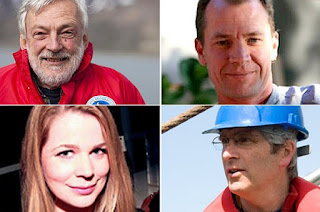 A oceanographer has made an extraordinary statement; the deaths of three of his colleagues might be a series of organized assassinations. Prof. Peter Wadhams is well known for his work on sea ice dynamics and therefore does not fit the usual profile of a conspiracy theorist; he's certainly not a "non-violent extremist" like your devoted author. In speaking out he is definitely well aware that he could be labelled a "loony" by his peers, and he has; but has decided to do so anyway. The three scientists all died in early 2013. This string of bereavements began on New Year's Day when Prof. Seymour Laxton supposedly fell down a flight of stairs and died from head injuries. This story is supported by his wife who was there at the time; she angrily rejects Prof. Wadham's assertion that it was anything other than a tragic accident. Dr Katherine Giles, a friend of Laxton and his partner, was killed when she collided with a lorry while riding her bicycle through the streets of ; and Dr Tim Boyd was struck by lightning while out walking during a thunderstorm near his home in . Amazingly there was a fourth victim associated with climate science that Prof. Wadhams does not mention. Christopher Bell, a PhD student who worked with Dr Boyd at the Scottish Association of Marine Sciences, was killed on January the 19th after he was hit by an avalanche while skiing at Glencoe in the . All these deaths occurred within a space of just over three months. What made Wadhams more suspicious is that in the weeks following Laxton's death he himself had an attempt made on his own life. He was driving along minding his own business when a lorry tried to force him off the road, see: http://www.telegraph.co.uk/news/earth/environment/globalwarming/11762680/Three-scientists-investigating-melting-Arctic-ice-may-have-been-assassinated-professor-claims.html. If this is a coincidence then it's an incredible one. For example, if Dr Boyd was really struck by lightning then he is one of only three people in annually on average who expire thus. Fatalities from avalanches in are also very rare because of the careful monitoring of snow accumulation at the ski resorts. In fact Mr Bell was the only person to lose his life to one for over two years hence, see: http://www.sais.gov.uk/. Skeptics will argue "So what?" They'll say, correctly, that the form of Dr Giles' demise was not uncommon at all; after all riding a bike in modern is not the safest way of getting around. And all the rest were "just a coincidence", but this then earns them an unfalsifiable get-out-of-jail-free card in any debate, as I've discussed before, see: http://hpanwo-voice.blogspot.co.uk/2014/04/pan-pareidolia.html. Mysterious synchronistic deaths of scientists are not without precedent. For a long period of time, eight years in fact, twenty-five experts working for Marconi died. Of course Marconi is a big company and statistically over that period of time a number of their staff are bound to shuffle off this mortal coil due to old age, illness and misfortune. However these deaths were different; their circumstances were highly unusual and startling. One man was found dead in a particularly gruesome suicide. He tied a chain round his neck and secured the other to a tree on a stretch of road near Beer, ; he then got into his car and drove off at high speed, decapitating himself. Another man had been behaving completely normally; then for no apparent reason he drove to and jumped off the into the Avon Gorge. The list goes on; see this interview with David Griffin for more details: https://www.youtube.com/watch?v=BCJSKhtTtC0. Also we have the brutal murder of biochemistry students Gabriel Ferez and Laurent Bonomo at New Cross, in 2008. There's a connection here to the Swine Flu outbreak, see: http://hpanwo.blogspot.co.uk/2009/04/emergency-swine-flu-meeting-with-ian.html. And who can forget the weapons inspector Dr David Kelly who "committed suicide" while rambling near Southmoor, Oxfordshire, see (scroll down): http://hpanwo.blogspot.co.uk/2009/11/alternative-view-3-part-2.html? Prof. Wadhams brings up Kelly in his interview above.

If what happened to Prof. Wadhams' colleagues really is a spate of organized hits then what motive could there be? Wadhams thinks it might be the oil industry. Skeptics have their own conspiracy theories too and one of those is that oil companies are secretly funding and supporting "climate change deniers" because they don't want governments putting a stranglehold on the flow of petroleum with its EEEEEEEvil Carbon™ emissions; and they're too greedy to care that it's flame-grilling the Earth. The only attempt to prove this conspiracy theory took place when a website published a number of documents which it claimed had been leaked from the Heartland Institute, an American conservative think-tank which has as affiliates a number of scientists who question man-made climate change. The authenticity of these documents was later called into question and the journalist James Delingpole went on to dub it "fakergate" and accused the revealing website of simply wanting payback for Climategate. No hard evidence has ever been produced that oil companies are covertly propping up doubters of the establishment man-made global warming theory. If the boot were on the other foot, which indeed it has been many times, the Skeptics wouldn't hesitate to make that very same criticism of us. Personally I think the oil industry has far more to fear from other emerging threats, like free energy and anti-gravity technology. There's far more reason to think that they have targeted and harassed inventors in that field of study, see here for details see: http://hpanwo-tv.blogspot.co.uk/2015/02/energy-politics-and-ufos-2015.html. (By the way, if the oil companies really are paying off "climate change deniers" then I want in!... Cash not cheques please.) In the last few years there have been burgeoning doubts among the people towards the official line that human Carbon™ emissions are the cause of climate change. Supporters of the partly line have tried to suppress those doubts, sometimes through open debate, but usually via dirty tricks and demonization, see background links below. In order to maintain the required narrative the keepers of the secret might need to "reshuffle" the personnel occasionally. I'm not sure what area of study Prof. Laxton and Drs. Boyd and Giles were working on, but it might have had an impact on the official position in the mainstream if published. None of their names appear on this explosive disclosure here, but I wonder how closely connected they were to it, see: http://www.breitbart.com/london/2014/12/23/noaagate-how-ocean-acidification-could-turn-out-to-be-the-biggest-con-since-michael-manns-hockey-stick/. The possibility of scientific fraud in the National Oceanic and Atmospheric Administration ought to rumble as loudly as Climategate or the Hockey Stick Hoax. Was it possible that a new scandal was about to break out and that the individuals who were eliminated in early 2013, for reasons best known to internal experts, might have played a crucial role in the publicity thereof? Their discipline, oceanography, makes this more likely. If that is the case why would the Carbonistas not arrange an assassination run? Conscience? Their respect for the sanctity of human life perhaps? Another news story has emerged that has a humourous side to it, at least for those not involved and so can then appreciate the irony. In the southern summer of 2013-14 the MV Academik Shokalskiy headed for . The Russian icebreaker had been chartered by scientists to study how global warming was affecting the retreat of sea ice that surrounds the frozen continent. However the ship became trapped in the aforementioned sea ice and was unable to escape. Several other icebreakers attempted to rescue the passengers and crew, but had to turn back because of the risk of getting stuck themselves. One of them, the Chinese ship Xue Long, was for a while, but luckily not as badly. Eventually the ship's compliment was evacuated in small groups by helicopter. Was the cause of the disaster human error when judging the sea ice density? Did the ship's personnel believe in the official climate change narrative so strongly that they denied their own observations, and so sailed the vessel into an icepack that they believed simply should not have been there? I'll see if I can get hold of a passenger manifest for that voyage, because it will be a good idea to monitor the health and safety of those aboard during that expedition. Let's hope none of these folk inexplicably fall down the stairs or get struck by lightning.
See here for background: http://hpanwo-voice.blogspot.co.uk/2015/01/2015-and-climate-change.html.
And: http://hpanwo-voice.blogspot.co.uk/2011/02/death-to-climate-change-deniers.html.
And: http://hpanwo-voice.blogspot.co.uk/2015/03/oxford-martin-school-and-geoengineering.html.
Posted by Ben Emlyn-Jones at 18:18

Another excellent piece of high quality writing. The article captures an outstanding turn of events that inter alia shines a light on the murky world of academic dispensation. The link to the rather creepy website of the Oxford-Martin school reveals a cult-like group of career academics, clean bibs and powders drier than the Gobi desert. Martin Rees and Gary Kasparov, based on their biographies, seem as unsure as anyone as to what they're supposed to be doing there. Other notables appear no more than window dressing with a combined IQ somewhere north of Jupiter. Their uncertainty is unsurprising considering a stated group objective that is woollier than a border collie could even hope for. Perhaps now their uncertainty will metamorphose into a certain trepidation as their enormous intellects contemplate a 'And Then There Were None' ending.

Thanks, Laurence. Glad you liked it :-) As for the Oxford Martin School, thereby hangs a tale! Luckily I live close to the place so can keep an eye on their antics. Check out my film "Oxford's Secret Science" as well.

I will watch the film with interest when I get a chance Ben. Regards.

Only stumbled across ur blog a cpl days ago,
so I haven't read majority of you blogs.
But DAMN ur good!!!
Lovin what I've read so far!
Thank you very much!