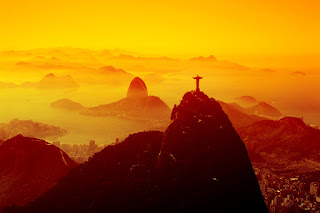 In there has been a wave of attacks on Spiritualists, mostly in the city of da Janeiro. Gilberto Arruda, a well known medium, was kidnapped and murdered; he was found dead with his hands bound. Also a memorial to another famous medium, Chico Xavier, was desecrated. Xavier was a prolific author, having penned over 450 books. He was nominated for the Nobel Prize and lived in Minas Gerais state, best known in alternative circles for the 1996 Varginha UFO incident. The authorities have blamed these attacks on "evangelicals", indicating that this is an attempt to persecute Spiritualists by fundamentalist Christians, see: http://news.yahoo.com/medium-killed-tomb-desecrated-latest-brazil-attacks-025831977.html. I'm not sure this is the case, but even if it is then I have to wonder, because these are the very religious fundamentalist that the Atheo-Skeptics oppose, people like Richard Dawkins and Christopher Hitchens. In this way they expose themselves because I don't believe Dawkins or Hitchens would speak out against the crimes I've just reported on. Rather they would refuse to talk about them; they would pretend that they were not happening. They are advocating an Atheo-Skeptocracy without realizing that they're doing it... Or perhaps they do realize; I'm not sure. There has always been legislation intended to give Spiritualists a hard time since the Roman Conquest when the druids on were exterminated, see: http://hpanwo-tv.blogspot.co.uk/2013/03/walking-on-edge-of-world.html. The oldest used in modern courtrooms was the Witchcraft Act of 1735 that was dusted off to jail Helen Duncan in 1944, see background links below. This was repealed soon after her trial and replaced by the Fraudulent Mediums Act of 1951 which made life very difficult for psychics for many years. This was eventually abolished, but not until 2008. Since then happily there have been no equivalents to take up its sordid mission, but this is not with the blessing of Skeptics. Those who wrongly believe that all Spiritualist mediums are charlatans are suggesting ways in which existing consumer protection statutes can be adapted. However if they had their way there would be further and far more extreme measures; Richard Wiseman says as much, and he's fairly moderate compared to some, see background links below. They'll use words like "regulation", but what they mean is "annihilation". Make no mistake; if these people had their way then every Spiritualist church in the country would be forcibly closed and all mediums jailed. They use platitudes like "freedom-of-speech" and "free-thinking" when it suits their position, but it's a lie, and a self-delusion. It's time for Spiritualists to fight for their rights and all those in the Skeptic movement need to look hard at their own ideological circle and think where it's really going to lead. Would a Dawkinsian Atheo-Skeptico-materialistic seculocracy really be that paradise-on-Earth that we're told it will be? I don't think so. It's more likely to be a world ruled by the pigs in Orwell's Animals Farm. "All people are now equal, but atheists are more equal than the religious." David Icke calls organized religions and atheism "opposames", things that appear to be opposite, but if fact are not. It's revealing to think that the evangelical Christians and the Dawkinsian Skeptico-Atheists of this world are presented at antitheses of each other, yet they will stand shoulder-to-shoulder and unite in condemnation of the middle position, the Third Way, the Spiritualist, spiritual-but-not-religious, non-specific pantheist; whatever you want to call it. Those of us who espouse the must not make the mistake that those of us in the past made, to embrace Atheo-Skeptico materialism in a religious theocracy because it was the proverbial "enemy of my enemy".
See here for background: http://hpanwo-tv.blogspot.co.uk/2015/03/helen-duncan-wartime-psychic-jailed.html.
And: http://hpanwo-radio.blogspot.co.uk/2015/06/programme-144-podcast-margaret-hahn.html.
And: http://hpanwo-voice.blogspot.co.uk/2012/06/richard-wiseman-skeptocrat.html.
And: http://hpanwo-voice.blogspot.co.uk/2013/01/alternative-funerals.html.
Posted by Ben Emlyn-Jones at 19:10

The term 'Spiritualist Mediums' etc. are a real ability, historically called various names such as seers, rishi etc. who would have been equally attacked. I am not advocating a blind susceptibility to such abilities and the realms/entities they can reveal and make contact with because like the very beings themselves different individuals may use such abilities correctly or for nefarious reasons. Another thing is labelling the field with convenient terms for things we may not at present really explain either spiritually (on a personal level) or 'scientifically'. Fortunately you have done sterling work in covering the case and life of one of the most important and demonized (in the human sense) in Helen Duncan.

Likewise Ben I think alongside Atheism, Institutional Religion and Pure non commital we should also refrain from the dualistic 'Left/Right' mentality when it comes to Spritualist matters. There is an interesting blurb from the old works of the Cambrige Platonists stating that: 'Reason was not merely an idea in the head, a mere itching in the cranium, but pre-supposed the divine Nous/intellect, which is intimately connected with the activity of a divine energia informing the pattern of the universe.'

What is interesting is the wisdom they derived from this does not mean to imply 'God' as a linear-contradictory-dualistic entity but more akin to eastern wisdom of which they used not just in preaching against false religious 'zeal' but equally and astutely preached against atheism. Mediums (as commonly called) can channel amongst other beings what is known as 'Messanger Ghosts' which sometimes as a result of disputes/unresolved etc. but...........and it's a big but...... do we possess the correct functioning mind the correct way around to interpret what is in front of us, indeed what we are creating?, or what is being said or indeed hidden? without falling for the tricks of mischevious individuals who wish to perpetuate a limited world view?, or indeed the multifarious agenda's of sprites, beings, ghosts, spirits or demons who wish to aid or indeed further delude us?.