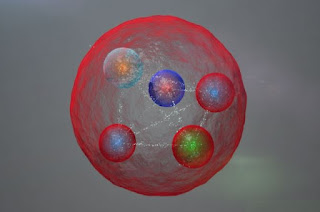 Over the last few months the Large Hadron Collider at the CERN laboratory has been building up to full power in order to carry out "Run 2"; I have been covering this extensively, as you'll see in the background links below. Results of Run 2 have yet to be published, but the team at the LHCb detector have announced that they've found something called a "pentaquark" from data in the original half-power run beginning in 2008. This is a particle predicted to exist by theorists over fifty years ago, but only now does the hardware exist to dig it out of the universe, in the form of the Large Hadron Collider. The pentaquark is a hadron made up of five quarks, rather like the protons and neutrons of atomic nuclei, which are made up of three quarks. These even include an "antiquark", an antimatter particle working harmoniously in conjunction with other normal kinds. Prof. Sheldon Stone, who is part of the team which made the discovery, said that this could open up a completely new field of physics because it indicates that there is a new state of matter. At the moment we know of five states of matter: solid, liquid, gas, plasma and Bose-Einstein condensate. This would add a new one to that list, see: http://www.iflscience.com/physics/new-particle-discovery-lhc-could-reveal-what-we-are-made. Unfortunately the scientists at the LHC didn't have long to study the pentaquark, just one billion trillion trillionth of a second; then it disappeared. This is common with obscure particles under extreme conditions. Luckily it doesn't have to power to transform other normal particles into copies of itself like strangelets can, see background links below. What I find interesting is that in the artist's impression of the pentaquark, the lines connecting the particles are shaped rather like a pentacle, pentangle or pentagram, depending which term you prefer. This ancient occult symbol fits perfectly with other things related to CERN, the Shiva statue and 666 in the logo etc. The lines I assume illustrate the connecting force holding the amalgamated structure together. There's no way of knowing what a real pentaquark would look like. Subatomic particles can never be literally seen in the normal sense of the word because photons, the particles of electromagnetic radiation on which light consists, are almost as big as the thing they're seeing. However we once again see evidence of the link between hard science and the esoteric world. I wonder if anybody knew about this before the pentaquark was discovered. In fact in the diagram it looks as though one of the quarks has been deliberately pushed off symmetry in order to avoid the lines depicting a complete pentagram. Was this deliberate?
See here for background: http://hpanwo-tv.blogspot.co.uk/2015/07/cern-progress-or-apocalypse.html.
And: http://hpanwo-radio.blogspot.co.uk/2015/06/programme-142-podcast-cern-special.html.
And: http://hpanwo-voice.blogspot.co.uk/2015/06/lhc-data-tap-on.html.
And: http://hpanwo-voice.blogspot.co.uk/2015/05/mystery-object-found-inside-lhc.html.
Posted by Ben Emlyn-Jones at 18:16