The Roswell Slides to be Revealed 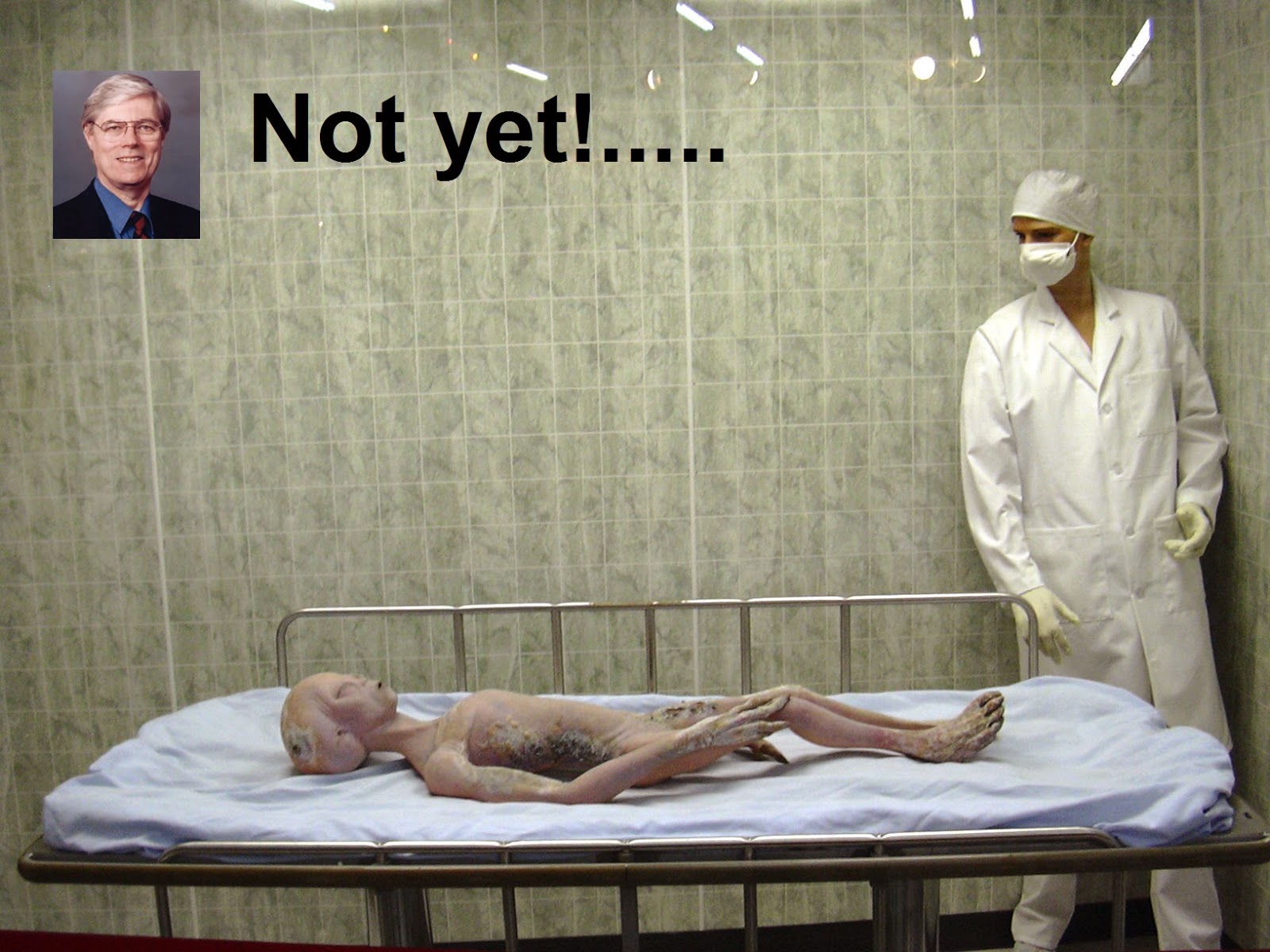 I have been writing and talking a lot lately about how 2015 could be the year of UFO Disclosure... or if it's at all possible then at least we have the best chance in 2015, see the background links at the bottom. This is for several reasons, like Stephen Bassett's Congressional Hearing Initiative and the Disclosure Petition VII, but also the announcement in November last year by the UFOlogy author and researcher Thomas Carey that he had come into possession of a series of photographs showing an extraterrestrial life form. He describes the subject as being smaller than an average human with a partly insect-like head. This matches the descriptions given by the mortician Glenn Dennis and other witnesses of the creatures inside the spacecraft which crashed at in 1947. Now, we hear a lot about alien autopsy pictures these days thanks to the success of the Santilli hoax, see: http://hpanwo.blogspot.co.uk/2015/01/area-51-alien-interview-new-research.html. However, unlike Santilli, Carey says he has the original photographs, not just modern copies. He has taken these to a Kodak-trained photographic scientist and they've been certified as coming from genuine 1947 film stock, see background links. Recently he has named his source, the mysterious flying lawyer woman; she is Hilda Blair Ray, a respected and accomplished legal expert and private pilot. She has long been associated with intelligence agencies too. Her husband, Bernard A Ray, was an oil company geologist and worked in during the 1940's. The couple are now deceased and never had any children. The full story of how the photos came to light, and how they ended up with Tom Carey, has not yet been revealed, but they were apparently found in a chest in an attic at their home in where they had been stored for many years. Another mystery is how the Rays came across these photos, but a clue lies in the fact that the alien ones are just one part of a slide collection of a hundred or more, some of which are ordinary in nature but depict famous people like Gen. Dwight Eisenhower who became the US President. Clearly the Rays were very well connected, Mrs Ray especially with her involvement in the world of espionage. This could explain how such enigmatic and explosive evidence ended up in their attic. The couple don't fit the profile of fantasists or hoaxers; and even if they had been it seems unlikely that they would gain much amusement from hiding forged photographs in their attic for the purposes of fooling UFO enthusiasts seventy years in the future.

Thomas Carey announced that he had these photos on the 13th of November last year during a live lecture during an event at the , . He is convinced that they are genuine and he is not the kind of man to say something like that lightly. He comes from a very hard-headed wing of UFOlogy which also includes people like Leslie Kean and Dr Richard Haines whom he shared the stage with in . Tom Carey has a reputation as a scientific and serious investigator. He has authored many excellent books on UFO's along with his colleague Don Schmitt. He is not the kind of person who would fabricate this story himself, knowing that it would ruin his good name. Nor would he publicize them widely unless he was satisfied of their authenticity; he must be well aware that if they are fake and get shot down after he's released them, then the Skeptics will have an orgy over it for years to come. So Carey has a lot to lose; this leads me to take him very seriously over his claims. In the background links, which I made around and just before New Year, I wondered when we would hear more from Carey and I was not disappointed. He has just posted a notice stating that "the Roswell Slides", these photographs with the aliens in them, will be formally unveiled in a highly publicized and well-organized event. This will take place on May the 5th at the National Auditorium in . This is a ten thousand seat indoor arena and the proceedings will be streamed live online for people to watch all over the world. The host will be Dr Edgar Mitchell the Apollo astronaut and native of who is deeply involved in exopolitics. Along with the slides themselves the full back story will be explained, including the history of the slides and the scientific tests done to authenticate them, see: http://www.theufochronicles.com/2015/02/roswell-alien-slides-to-be-unveiled-in.html?m=1. I do maintain that there are hazards with this strategy and I wonder if they're doing the right thing. Carey must realize that there will certainly be forces of opposition to deal with. The keepers of the secret will want to stop him and will use a number of methods to do so. At the moment few people have seen these slides so all the eggs are in just one very unsteady basket. Are they definitely in a place where they can't be found and stolen? I assume Carey hasn't just dumped them in a filing cabinet in his office; but even a safe in his own home could be targeted by "burglars". Can he trust all those around him? I'm not the type to cry "shill!" willy-nilly, but, to be frank, I have my concerns over Dr Mitchell, see: https://www.youtube.com/watch?v=yCVvE7Zj1tE. I would certainly not brief him into any secrets relating to the Roswell Slides. Actually wouldn't it be better just to release them straight away? The moment Carey got the all-clear from Kodak he should have put them straight onto Google Images. Within five minutes they'd be downloaded to a million computers all over the world; this would make them indestructible. Steve Bassett disagrees and thinks it's a good idea to have a big prearranged launch with a build-up for publicity, as he explained to me in my HPANWO Radio interview with him, see: http://hpanwo-radio.blogspot.co.uk/2014/11/programme-113-podcast-stephen-bassett.html. As I say in the background, I do get the sense of a distinct build up going on at the moment. Bassett has also talked about what he calls the "Disclosure Clock". This is based on the "Doomsday Clock" of the Cold War during which it was never known when a nuclear war would break, out so no countdown was possible; but then somebody had the idea of producing a clock-like graphic to indicate how close we were to nuclear exchange in political terms. Somebody has had the bright idea of doing the same for UFO Disclosure. As you can see it's currently at and forty-five seconds; almost the highest setting possible apart from , which means actual Disclosure itself, see: http://www.paradigmresearchgroup.org/clock.html. As I write this post, we're just a few days from the deadline of the Disclosure Petition VII, see background links. So far there are only 13,712 signatures; we need another 86,288; sadly this seems unlikely now. However a big media furore over Tom Carey's photographs might be enough to make up for losing the Petition, so maybe Steve is right and this tactic is the best one. On a personal note, two days later it's the British general election and I would find it very funny if something else could knock that off the headlines. One thing's for certain, I'll be watching that live stream from . It's a shame I won't be able to get there in person. As soon as more details are publicized about the event I'll let HPANWO-readers know.
See here for background: http://hpanwo-tv.blogspot.co.uk/2014/12/ufo-disclosure-2015-happy-new-year-last.html.
And: http://hpanwo-voice.blogspot.co.uk/2014/11/2015-year-of-disclosure.html.
And: http://hpanwo-voice.blogspot.co.uk/2015/01/disclosure-petition-vii.html.
Posted by Ben Emlyn-Jones at 15:13

with all the possible things that could happen to these pictures,is a simple drone, something we use way to much.