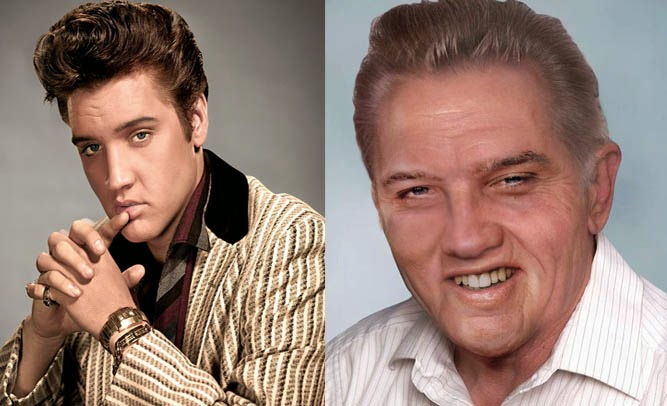 Stop laughing!... I was talking to somebody the other day and he made it clear he took a very dim view of conspiracy theories. He gave a little titter and said in a mocking tone: "So, you think Elvis is still alive, right?" Actually I don't believe all conspiracy theories; the moon is not an alien space station, the Earth is not hollow and Lewis Hamilton is not Barrack Obama's lovechild. I had no doubt, note the pluperfect tense, that Elvis Presley was as dead as the dodo; I still have few, but not as few as I used to. The great singer-songwriter who was nicknamed "the King" died at his home on . He was found unresponsive on the bathroom floor after having suffered a heart attack while sitting on the toilet; a book was lying beside him that he'd been reading at the time. He was just forty-two years old. His health had been deteriorating after his extremely acrimonious divorce a few years earlier, which had been a media sensation. News reports, TV programmes and books had been appearing revealing secret aspects of his personal life and Elvis found this very difficult to deal with. He took all kinds of drugs and put on a huge amount of weight. He doggedly continued performing even when he could hardly stand on the stage due to the psychological and physical conditions he had developed. Like many great figures in the arts, Elvis suffered terrible emotional pain his whole life. He had originally had a twin brother who had died shortly before their birth; and apparently this kind of experience can affect one's entire life and Elvis dedicated part of the grounds of his home, in as a memorial garden to the twin brother he never grew up with. Therefore the official story of his death is perfectly plausible.

Yet ever since his death was announced a dedicated number of people have refused to believe that Elvis Presley died and instead claim that he's still alive. He either faked his own death or was forced to take on a new identity. There is a traditional website on this subject, see: http://www.elvis-is-alive.com/, but of course nowadays most of their activity centres around their Facebook group: https://www.facebook.com/evidenceelvispresleyisalive. A psychologist would of course dismiss everything they do as simple denial. This tendency consists almost entirely of Elvis' fans and they can't face the fact that he's dead because they loved him so much. However regular HPANWO-readers already know how little I think of psychologists. Could it be possible? Well, firstly I certainly don't think Elvis faked his own death himself. If he had he would have made it a different death; nobody famous wants their last moments to be forever remembered as sitting on the bog reading a book. It would have been something dramatic and glamourous like maybe a plane crash or driving a car over a cliff. Or suicide like the comedy character Reginald Perrin. If he were somehow brainwashed or otherwise forced to take on a new identity against his will then why? No idea. Yet these questions have not fazed those who maintain that Elvis lives to this day. This week it would have been Elvis' 80th birthday, and the Facebook group has been inundated with e-cards in the hope that maybe somewhere the King is sitting there reading them, see: http://www.newsweek.com/his-80th-birthday-revisiting-conspiracies-have-kept-elvis-presley-alive-297968. People still write in to announce that they've seen Elvis in public places, sitting in a diner or stepping onto a train. They question the validity of Elvis' funeral and whether another body wasn't substituted for the man they thought they were burying. These claims are rather spurious, yet occasionally a more substantive story comes to light. I was on the phone to a friend of mine the other day and he told me that it had been reported on American television that there was been a road traffic accident in which an elderly man had been killed who'd be positively identified as Elvis Presley. There are no online references for what he said, but I did find this: http://empirenews.net/shocking-dna-results-revealed-body-of-elderly-homeless-man-identified-as-elvis-presley/. Obviously both stories can't be true; Elvis can only die once. However if Presley was involved with the FBI to what extent did this involvement go. I am not convinced by this idea at all; sadly I think Elvis Presley is dead and he died the way history tells us he did. Personally I think there's far more evidence for another case which is an entirely opposite situation in the music world, that a celebrity rock and roll star is thought to be alive when he is in fact dead, see: http://hpanwo.blogspot.co.uk/2008/11/is-paul-mccartney-dead.html.
Posted by Ben Emlyn-Jones at 18:45


Of all the myriad Elvis theories, this seems plausible:

"The motive is simple. Elvis potentially had the means (money) and the popularity to convince millions of his disbelief in the official JFK assassination story ”He was a superstar with an international following, and he was obsessed with the assassinations of President Kennedy and Robert Kennedy. He was so obsessed that he watched the Zapruder film for hours at a time.”
(Salvador Astucia, Author of "Opium Lords - Israel, The Golden Triangle and the Kennedy Assassination")

Elvis’s death happened the same time the House Select Committee was reinvestigating the assassinations of JFK and Martin Luther King. And, three months later a pivotal FBI official -- William Sullivan -- was shot. These are very suspicious circumstances. Conspiracy theory is and always will be more of an ‘art’ than an exact science. None of this is as outlandish as some seem to believe. The world’s most popular rockstar died, during a time when public personas were getting waxed – left and right.
http://www.abovetopsecret.com/forum/thread237889/pg1

Elvis is Dead Hoax
http://uncyclopedia.wikia.com/wiki/Elvis_is_Dead_Hoax
“A lot of people think I'm alive, but actually, I'm dead.”
~ Elvis on whether he's dead or alive

He lives here in texas

I hope he was OK when the hurricane hit.

Esposito sure told a lot of stories .
1.He said that 1977 Elvis lying bed.
2.He said that Elvis lying carpet.
3.Elvis fell off his porecelain thrown.
4.Elvis dyed accidently .
5.Elvis didn't die from over-dose?
6.He said al Strata went up stairs 1st.
7.Then He ran upstairs where elvis was.
8.He said Al called then He said he called.
9.He said ambulance came first then he said
That Dr Nick came first -he was confused?
10.Shortly before Joe Died he said :
a.He had Elvis presley note from day he died.
b.He had hidden Elvis presley drugs (from DrNick).
c.He had clean up the crime scene .
(David Stanley said he clean up crime scene).
11.Joe said he and memphis Mafia all did drugs.
Nancy Rook said: (after Elvis gone ambulance)aunt Delta told me to come with her to clean up Elvis room and bathroom. David Stanley said he clean up drugs in Elvis room and hid them.
(David stanley said he took up _ to Elvis )
Elvis cook/maid Nancy Rooks said day Elvis died David there.
August 16, 1977, David was among the first to find the lifeless body of Elvis. Elvis suffered from severe constipation that was brought about by his drug use.
(David Stanley, is convinced that The King’s death was not accidental) THE STANLEYS :Stanley said me and my brothers brought Elvis on a tray,package,which called attack.
David Stanley admitted that he and his brother had been partying with women all night at a nearby motel, and were passed out when Elvis died.

Thanks for the information, Anon.