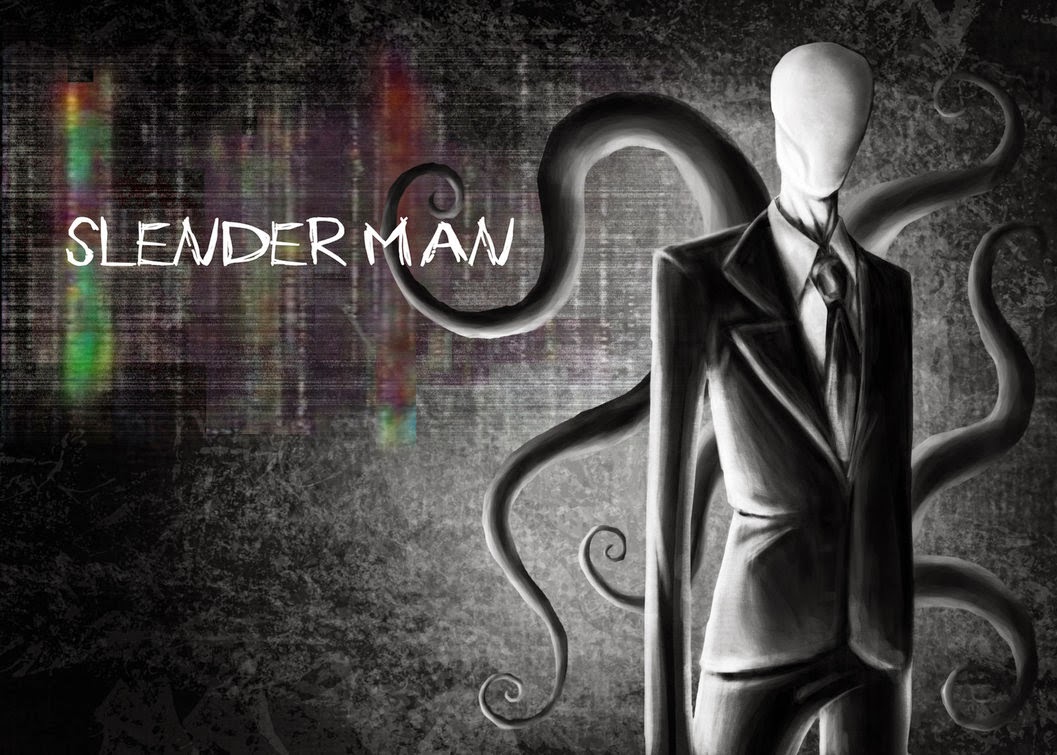 Slender Man is one of these strange cultural spectacles that occupy the no-man's land between fact and fiction. Officially it is an imaginary character created on a good old pre-Facebook forum on June the 10th 2009 (I feel nostalgic!) A person with the username "Victor Surge" posted some photographs featuring children at play. These were monochrome prints, and the hairstyles and clothing date them to around the late 1970's to early 80's. These were allegedly taken in and were "lost and found". Victor Surge claimed to have electronically altered the images himself; this is reasonable to assume because the thread is entitled Create Paranormal Images. In the background you can see a tall, thin humanoid figure dressed in a black suit and tie. It has paper-white skin and no face or hair. Strangest of all it has a number of tentacles resembling those of an octopus or squid emerging from its back or shoulders. The back-story to the photos explained that the phantom had come to abduct the children. The forum user, real name Eric Knudsen, has always maintained that the photographs were ones he'd faked, and this is probably true; Knudsen owns a loose franchise on What's interesting is that he had been inspired to create the tale, illustrated with his photos, by established horror and fantasy writers like William S Burroughs, HP Lovecraft and Stephen King. He was also interested in legends of the "shadow people", which is a very real and serious field of paranormal research; I myself have witnessed them. Shadow people are spectral entities that are often witnessed by people, usually while they're experiencing sleep paralysis. They appear in one form or another in almost every culture in the world and encounters are often a terrifying ordeal. Shadow people can behave in a very unpleasant manner; they might attack you violently, sit on top of you making it difficult to breathe and even sexually assault you, see: http://hpanwo-voice.blogspot.co.uk/2011/12/benylin-and-sleep-paralysis.html. The prevailing view in the scientific and Skeptic community is that this is caused by the fact that during sleep paralysis, your muscles are all paralyzed to stop you sleepwalking, but you're emerging from REM sleep, the brain state when you dream. So you're effectively dreaming while awake, and the things you perceive are therefore hallucinations, see: https://www.youtube.com/watch?v=QmbpOucNVn4. I'm not so sure; I think it's very possible that the brain is in an altered state that allows it to experience worlds beyond the universe that we're normally aware of. Sleep paralysis is related to other altered states of consciousness such as those induced by drugs or sleep deprivation, see: http://hpanwo-voice.blogspot.co.uk/2014/04/sleep-deprivation.html. However we're in a confusing situation because reports have come in of some people really seeing

These stories began in , but have recently emerged in the . People in have reported encountering Slender Man in, of all places, Cannock Chase, see: http://metro.co.uk/2015/01/25/ghostly-sightings-of-slender-man-reported-in-uk-town-5035922/. For some reason that wooded beauty spot in Staffordshire has been the focus of paranormal activity for as long as anybody can remember. It is also said to be where black-eyed kids first popped up on this side of the Atlantic, see: http://hpanwo-voice.blogspot.co.uk/2014/10/black-eyed-kids-uk.html. My friends Don Philips and Steve Mera have also carried out field studies in that area, see: http://hpanwo-radio.blogspot.co.uk/2014/11/programme-111-podcast-don-philips-and.html. How is this possible when the figure these people are seeing is just a fictional character they found out about online? One obvious explanation is that the Skeptics are right and that people are hallucinating; it would make sense that our minds would delve into our memory to populate our waking nightmares. They might also be lying, fabricating a whimsy just to get their name in the newspapers. But is it really that simple? Could another possibility be the opposite going on; Slender Man is real and that Eric Knudsen based his fictional character on his unconscious memories of real events or information he'd discovered? After all, he had an existing interest in the subject of astral entities. This makes Slender Man very similar in nature to "This Man", see: http://hpanwo-voice.blogspot.co.uk/2013/11/this-man.html. What interests me about the Cannock Chase sightings is that despite the media referring to Slender Man in their spots on the subject, the actual witness statements do not match those of Knudsen's character at all. They report that the being has "blood red eyes", "a hat" and "razor sharp fangs"; Slender man has a completely featureless head. They also relate that the creature wears a "Victorian" costume; in those days fashions were very different to the modern black suits Slender Man wears. Therefore I suspect that the Slender Man angle is one purely concocted by the journalist, see: http://metro.co.uk/2015/01/25/ghostly-sightings-of-slender-man-reported-in-uk-town-5035922/.We live in a mysterious universe in which what we see, hear, taste, touch and smell in ordinary wide-awake consciousness is not all that exists. With adult and sensible investigation we might find ways to explore the gulfs between our own world and others, but media sensationalism and the distorting of narratives are not steps in the right direction.
Posted by Ben Emlyn-Jones at 18:04