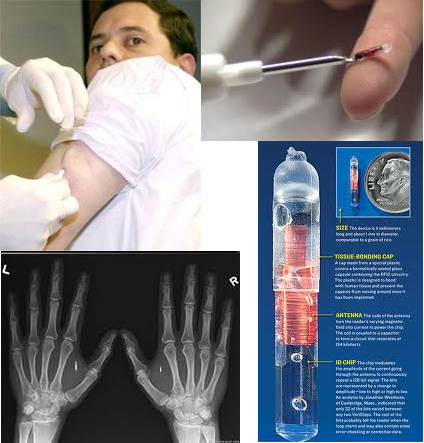 A newly-opened office building in is being used in a trial for the microchipping of people. This is a subject I've covered extensively, see the background links below. The chip is the size of a grain of rice and is inserted under the skin of the hand in a minor surgical procedure. In the news report the BBC journalist Rory Cellan-Jones receives one himself. Once chipped the office employee is connected to a single database that covers door locks, lifts, computer log-ins and other equipment. It's obvious that these devices have come on a long way since the earliest Verichip and Digital Angel systems which were just simple RFID transmitters. These new chips can store large files which can be downloaded from the employee to printers, smartphones and other devices, see: http://www.bbc.co.uk/news/technology-31037989. The risks of this system are many-fold. One immediate effect is that once chipped you are forever connected to an electronic database from which you can never log off. If you allow this database to control everyday aspects of your life, like opening your front door or starting your car engine, then it makes you totally dependent on that system to function in society. It gives whoever controls that system complete control over your life. The perceived benefits will lure people into the net: "You'll never have burglars!" "Your car insurance will be really cheap!" "Your bank details will be completely safe!" etc. Aaron Russo had a lot to say about bank details in his 2007 interview with Alex Jones; he said that the goal of the New World Order was to have every citizen entered onto a computer network connected to a electronic implant in their body from which every aspect of their life would be controlled in the ultimate high-tech Big Brother state. Anybody who disobeyed an order from the government would be simply removed from the network, be unable to do anything, including being able to buy food and therefore starve to death, see: http://www.prisonplanet.com/articles/january2007/290107rockefellergoal.htm. In the novel Better Than Life, a book based on the ingenious sci-fi comedy series Red Dwarf, one of the characters punishes a man by taking out a court order that stops him from buying Heinz baked beans; instead he has to put up with inferior supermarket brands. This may sound funny, but many a true word is spoken in jest. In the microchipped society just such a punishment will become possible.

The company which runs the office block has reassured us by saying that its staff are not obliged to be microchipped, it's left up to them as a matter of personal choice. It's not in any way compulsory... yet! They key word is "yet!". It's the classic frog-in-a-saucepan metaphor: If you throw a frog into a pan of boiling water it will jump straight out before being badly hurt; but if you throw it into a pan of cold water and slowly turn up the heat, it will sit there and cook. We all have to be smart frogs who are aware of that trick and make sure we don't even get into the pan at all. Microchipping will always start off as a voluntary scheme, but as more and more people are seduced by the ease and convenience of it eventually there will be only a minority left who are unchipped. After all, this technology was only originally intended to be used on dogs; nobody originally suggested humans could be chipped at all. Eventually the firm will throw up their hands in mock indignation and say: "Oh well, we might as well make the rest of them do it!" This is why I made such a fuss when my daughter's school tried to fingerprint her; I suspect that this was a cold saucepan of some kind, see: http://hpanwo.blogspot.co.uk/2007/11/this-is-drawing-done-by-my-12-year-old.html. The rate technology is advancing, even if we don't speculate about what is available in secret black budget government projects. We could be looking very soon at electronic implants that can do far more than just store spreadsheets and pay for Starbucks; devices could be used that have a direct effect on the human body. Of particular concern is of course the brain. I suspect that psychotronics are already in use in some targeted individuals, but the experimental stage might be expanded into common practice very soon. I fear we could be on the brink of it if we don't wise up and get out of the saucepan now, see: http://hpanwo-voice.blogspot.co.uk/2015/01/mark-mutch-sectioned.html.
My two friends and fellow researchers on YouTube, Izzy Smart and Jamnoise72 have both made videos on this subject too.
See here for Izzy's: https://www.youtube.com/watch?v=74aEwlcBo08.
And here's for Jackie's: https://www.youtube.com/watch?v=cuDee-O8OaU.
See here for background: http://hpanwo-voice.blogspot.co.uk/2014/01/all-people-to-be-microchipped-within.html.
And: http://hpanwo-voice.blogspot.co.uk/2014/01/neon-nettle-article.html.
And: http://hpanwo.blogspot.co.uk/2008/11/coins-are-dropped.html.
And: http://hpanwo.blogspot.co.uk/2008/09/michael-dimercurio-and-kevin-warwick.html.
Posted by Ben Emlyn-Jones at 17:46

Thanks for the info, some very scary stuff indeed.

You're welcome, Zannie. Spread the word!

Happy to Ben. I actually live in Sweden, so just hope people read it. Shared via Facebook

That's useful, Zannie. Somebody else who lives in Sweden contacted me and says this has hardly been touched by the Swedish media. Red Ice have covered it of course, but mainstream TV, newspapers etc have ignored it. It's been far more widely known about beyond Sweden internationally, than within its borders.

Hi Ben an interesting article but then I have known about it perhaps as long as you have... Yes the crap in the custard is indeed that which you mentioned and that is the time when it will control your moods and also pacify you as you are being herded into the fema camps DO NOT FIGHT , STAY CALM, OBEY goes back to the commands in the film They Live !!! I am glad you have the ability to be anle to publicise this sort of thing well done

Thanks, Mike. Good to hear from you again :-)