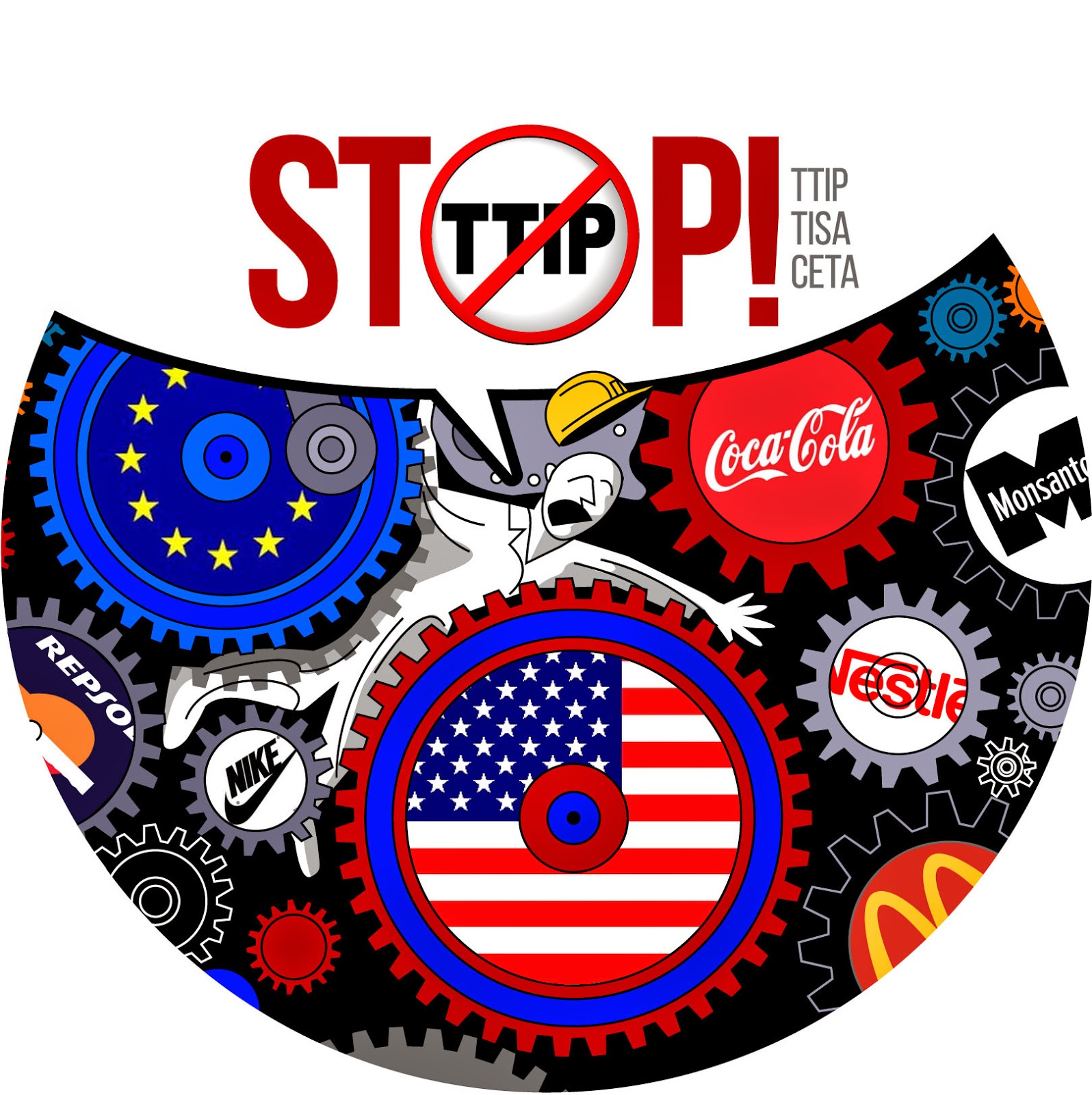 I'm not normally a fan of George Monbiot, in fact I've given him a lot of stick over the years, for example see: http://hpanwo-voice.blogspot.co.uk/2011/09/another-climate-change-dineier.html. However I am forced to respect him for the latest entry of his column in The Guardian. He has alerted his readers to the danger of the TTIP- the Transatlantic Trade and Investment Partnership. Interestingly it confirms a prediction I made a few months ago when I wrote about the TTP- Trans-Pacific Partnership. I said that before long there would be equivalent policies implemented in other areas of the world and I was right, see: http://hpanwo-voice.blogspot.co.uk/2014/03/trans-pacific-partnership.html. This is not because I'm clairvoyant; it's because I have a basic understanding of conspiratorial geopolitics. Both the TTIP and the TPP are essentially the same thing; they're treaties intended to allow international corporations the power to do whatever they like, wherever they like, whenever they like, and disregard completely national laws and sovereignty. If at any time a legislature in any country decides to obstruct the will of a global corporation then that government could be sued, not through the existing international judiciary, but via a tribunal of commercial lawyers. These "investor-state dispute settlements" would be a secret court without any public access or accountability. Monbiot provides previous examples of this kind of infamy; a tobacco company winning compensation off and because of their public health campaigns encouraging people to give up smoking. A lot of these cases involve threats to environmental protection, which is Monbiot's specialist concern; and oil companies and goldmines have taken legal action against several Central American states because their governments have halted their operations for breaching the national laws in the area which stop the destruction of the rainforests and the poisoning of water supplies. So far over two and a half billion dollars has been won by mega-rich corporations from some of the poorest sovereign states in the world because of these secret commercial courts, no doubt reducing the living standards of millions of people who are already living in abject poverty. If the TTIP is introduced, incidents like these will become far more commonplace, see: http://www.theguardian.com/commentisfree/2014/nov/04/british-government-leading-gunpowder-plot-democracy-eu-us-trade. Monbiot speculates that the privatization of the NHS could be among the first targets; I'm not normally a pessimist, but I have to admit that's a fait accompli, see: http://hpanwo-hpwa.blogspot.co.uk/2014/07/allyson-pollock-at-tedx.html. However when it comes to other public utilities, like the railways and Royal Mail, we still have a chance to save them from being completely ruined. As Monbiot says, there has been a backlash against the TTIP, not a victory yet, but people are aware and taking action. That's the biggest hurdle to overcome; once people are simply awakened from apathy then the job is more than half done. He uses the term "gunpowder plot"; those are words with very progressive connotations nowadays because of V for Vendetta, Anonymous and the Occupy movements. However the metaphor of somebody planting a bomb in a national legislature and blowing it sky high is rather ambiguous when it comes to the contemporary world stage. In some cases patriotic indignation can be a very positive and creative force. Monbiot regards the behaviour of the countries who have signed up to the TTIP as contradictory because they're essentially voting for their own emasculation. However he needs to look beneath the surface and understand that national leaders don't always represent the interests they claim to, not just in terms of a nation's people, but even the nation itself. This would hardly be the first time a British government has committed treason. There is no paradox in David Cameron wanting the opponent of the TTIP, Jean-Claude Juncker, off the European Commission and at the same time is publicly preaching that he's considering the 's exit from the European Union. Cameron knows very well that there is an undercurrent at work here and his duties are connected to that. But it's generally a good article by Monbiot, far better than his usual Carbonistic, Club of Rome, Agenda 21 sludge. Its primary theme is that an informed, politically-aware and rebellious public is a superpower that will never have a rival.
Posted by Ben Emlyn-Jones at 19:28