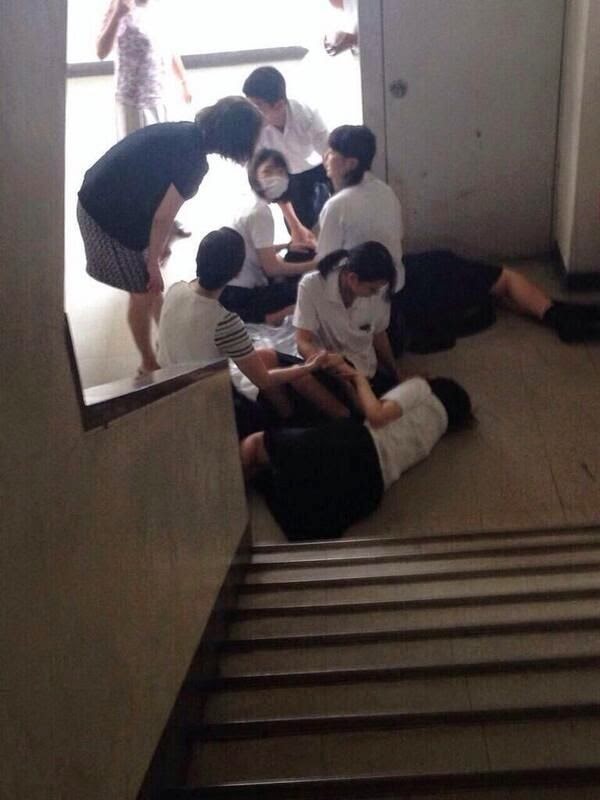 Something very odd indeed happened in in June this year. At a private school for girls in the city of , classes were proceeding as usual on a Monday morning when a first-year pupil began screaming at the top of her voice and then collapsed onto the floor. The next moment many other girls in the classroom did the very same thing; about twenty-six altogether, simultaneously. There was a period of chaos that led to the school being closed for the rest of the day. Luckily none of the pupils or teachers became seriously ill and the girls who had been affected recovered quickly and completely. The cause of this incident is unknown and the education authority has launched a full investigation, see: http://www.japantimes.co.jp/news/2014/07/01/national/26-fukuoka-schoolgirls-fall-ill-panic-attack-suspected/#.VFeFCvmsWSr. The students who escaped whatever it was that struck down their classmates did what kids always do these days, they posted Tweets and Facebook photos of what happened. The popular rumour is that the schoolgirls were possessed by "vengeful spirit". Ideas like this are common in ; despite their very technological and scientific society, the Japanese people are less materialistic than most developed nations. These girls in Yanagawa had just come back from a school trip to , a place reputedly haunted by the ghost of a headless girl. Skeptics would definitely rule out any real supernatural presence behind this incident and the psychiatrist Rika Kayama has suggested that superstitious fear might have caused the girls to experience an episode of mass hysteria. They were teenagers and probably had an underlying level of anxiety that comes naturally from being in adolescence; the school trip pushed them over the edge.

As regular HPANWO-readers know, I take the idea of ghosts and associated phenomena completely seriously and am not as willing to dismiss the possibility of real paranormal powers as Dr Kayama is. This doesn't mean I believe there is literally an evil girl-like spirit wandering the mountainsides of the , reminding me of the Japanese horror film The Ring. Nevertheless I do dispute the hypothesis of mass hysteria. I've been in school classrooms myself when a fellow pupil has suffered a sudden seizure and the first thing everybody else does is rush to their aid. Can a large number of people all be totally overcome by both a mental and physical breakdown, simply by seeing it happen to somebody else? There are several other very similar cases to this on record, including another at a girls' school, this time in in 1965; however the one I've studied closely is the famous Hollinwell Incident. It happened one morning in July of 1980 at an open country field in Nottinghamshire. There was a marching band pageant involving over five hundred children and their parents. At about people all over the field suddenly started to feel sick and faint; they staggered and fell to the ground. Panic ensued and dozens of ambulances had to be called. Abut three hundred people were taken to several different hospitals and nine were kept in overnight. The cause is still a mystery although food poisoning, pesticides and radio transmissions have all been suggested; but I simply can't comprehend how something like that can happen by purely psychological means. See this HPANWO TV film for more details: http://hpanwo-tv.blogspot.co.uk/2014/04/the-hollinwell-incident.html. There has been no further news on what took place in back in June. I don't rule out the possibility that some kind of occult phenomenon was involved in the event; or even that it might be some kind of secret government experiment, as I suggested with Hollinwell. If there are any updates I'll let you know.
Posted by Ben Emlyn-Jones at 18:51