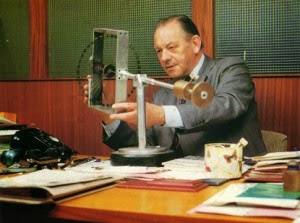 Eric Laithwaite is one of the heroes of science both in conventional history and the unconventional. He is one of the most successful and acclaimed engineers of the 20th century, and he was also an eccentric maverick like Nikola Tesla, and Wilhelm Reich. He always seemed to feel more at home in the company of amateur inventors than with academic "experts" and this led him into dangerous waters; his ideas eventually ruined him. Like many of his nonconformist peers, Laithwaite has an acceptable face that he is acknowledged and admired for. He was a highly experienced and talented electrical engineer and in 1964 he invented the linear induction motor. This is like a normal electric motor except that it has its moving parts arranged in a line so that it produces forward motion, as opposed to the more familiar torque which turns a shaft. This led to the development of the magnetic levitation railway- the "maglev", which is in common use around the world, especially in . The producers of the James Bond movie The Spy who Loved Me also wrote in a linear induction motor weapon that is seen in the film being tested in Q's laboratory. Laithwaite was also a media personality who appeared on many TV shows to communicate these ideas to the general public. Like many other pop scientists he was invited to host the Royal Institution Christmas Lectures; this is an annual event aimed at young people which has been running for almost two hundred years and Laithwaite hosted the very first one to be televised in 1966. It was entitled The Engineer in Wonderland and it was a great success. However when returned to do the same again in 1974 everything had changed.

Because of his open-mindedness and lack of due reverence for the establishment, Eric Laithwaite had spent a lot of time investigating the work of lay inventors "tinkerers" as they are sometimes known, although this is a very condescending term. He became fascinated with gyroscopes, devices with a flywheel spun very fast to make the wheel stable in relation to outside forces. They have a large number of applications, for instance in navigation systems and gauges of various kinds. However Laithwaite discovered something highly unusual about them- the wheel lost weight and inertia while spinning. He found this out when an amateur inventor friend let him observe an experiment in which this property could be extracted from a gyroscope mounted on a swinging pendulum. Laithwaite understood that this was in effect a form of perpetual motion; it violated Newtonian Mechanics. Nevertheless he reported what he had honestly observed and when he turned up to present his second Royal Institution Christmas Lecture in 1974 this is the subject he decided to talk about, this time he called his event The Engineer Through the Looking Glass. During the lecture he demonstrated to the wide-eyed young audience a very simple machine he'd designed to illustrate this heretical effect. It was simply a long metal shaft with a solid wheel attached to the end. The entire apparatus was very heavy, over 40 lb, and a man would have trouble lifting it even to waist height. But then Laithwaite brought out a motor which he used to rotate the wheel until it was spinning at 2500 revolutions per minute and an incredible transformation occurred. The device became light enough for a man to pick up with one hand and even wave around in the air as if it were just a small stick. The rapid rotation of the wheel appeared to reduce the effects of gravity and mass; this is supposed to be impossible, see: https://www.youtube.com/watch?v=MHlAJ7vySC8. The reaction from the academics was scorn and outrage. Over its entire history the Royal Institution has never declined from publishing any lecture that has been given inside its walls, before or since... except this once. Laithwaite was effectively banned from the RI and he was disgraced by his fellow scientists. He attempted to continue his research independently through Gyron Ltd, a company he set up himself, but sadly he died in 1997 without achieving his dream, a dream of building a machine that would provide "reactionless propulsion", free energy and anti-gravity, for all the world to enjoy. Why is that? Well, I've discussed that subject numerous times before.
See here for more details: http://hpanwo-tv.blogspot.co.uk/2014/05/ben-emlyn-jones-live-at-bufog.html.
And: http://hpanwo-tv.blogspot.co.uk/2012/09/martin-fleischmann-dies.html.
And: http://hpanwo-voice.blogspot.co.uk/2014/04/drinking-bird.html.
Posted by Ben Emlyn-Jones at 19:20

Thanks. Nice one, Andrew. I searched for the video and never found it.