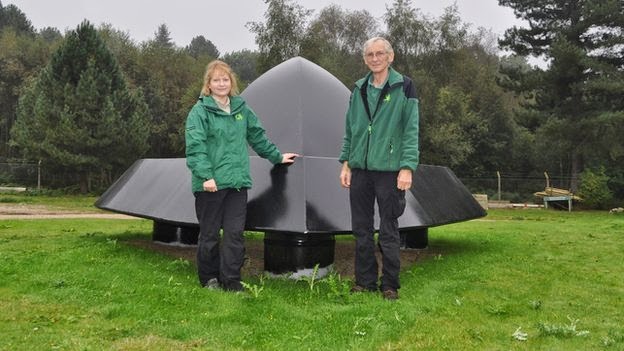 The Forestry Commission has commissioned a model of a UFO to be placed in ; it is based on the descriptions of the object given by the witnesses. The life-size objet d'art was designed by the sculptress Olivia English and is made of black metal. It has some symbols on one of its flanks that are not meant to mean anything; "there's no secret code- it's art", said Ms English. The Commission is determined to remain "impartial" and has a long and almost hyperventilating disclaimer in the promotional literature for the model, as it does for the whole "Rendlesham UFO Trail", see: http://www.bbc.co.uk/news/uk-england-suffolk-29280298.The local authorities around seem to be very ambivalent about their region's extraterrestrial folk history. On the one hand, some of them have not missed attempting to exploit the incident for the area's economic prosperity, as has done (I personally challenge the moral objections to that, see: http://hpanwo-voice.blogspot.co.uk/2013/04/roswell-upon-avon.html), however there is clearly a hesitant and aversive tendency still very much in control. A few days before writing I attended the Rendlesham Forest Incident Conference 2014, see: http://hpanwo-tv.blogspot.co.uk/2014/09/rendlesham-forest-2014.html, and I was surprised to find that the venue, , had no UFO-themed banner or posters on display outside; I found out that this was by order of the mayor's office! I'm not suggesting there was anything sinister going on, I'm sure Woodbridge has not seen any men in dark suits and sunglasses issuing threats, but it's clear that the official ridicule and denial... which is a quote by the way... is taking its toll. I look forward to the sculpture being erected in the clearing in currently marked by a triangle of two-foot high posts; I'll probably go and visit it. I'm glad that the Forestry Commission takes the Rendlesham Forest UFO Incident at least seriously enough to fulfil a project like this; I hope it encourages others to do the same. However there is one more problem. The clearing on the UFO trail is often thought to be the place where the object landed on the first night, during the Burroughs and Penniston sighting, but it's probably not. It's actually close to the estimated location of the Halt sighting on the second night, where Lt. Col. Charles Halt, the deputy commander of the base, investigated a possible second landing site and saw a light shining through the trees and recorded his famous live tape, see: https://www.youtube.com/watch?v=jxdNsSwMeDQ. The first night location has been extremely difficult to pin down, and there are almost as many theories as there are theorists. If you take a look at the UFO map of the area you'll see that the real place is most likely to be much further to the west, close to the Woodbridge East Gate, see: http://roswellproof.homestead.com/rendlesham_pictorial.html. I don't know if this error by the Forestry Commission is deliberate or accidental; or if it's deliberate, what motive they have thereof?
Posted by Ben Emlyn-Jones at 18:30