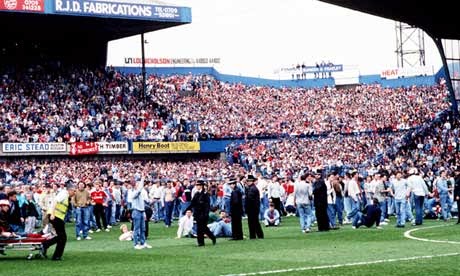 We often hear it said that "conspiracy theories are never proven true!" Yet again and again this is shown to be false. One enduring conspiracy theory concerns one of the worst disasters in British history. On at the Hillsborough Stadium in the gates of one of the stands were opened and a large crowd of people ran in to watch a football match. This resulted in the stand becoming grossly overcrowded to the point where almost a hundred people were crushed to death; and another thousand were injured. The match in progress was an FA Cup semi final and the full horror was seen by millions of people on live TV. The official inquest, known as the Taylor Report, recommended changes to health and safety procedures at football matches and architectural adaptations to football grounds, but the bottom line of the inquiry was that nobody was to blame except the victims, and that it was just a freak tragic accident. There has been a long campaign by the relatives of those who perished in the disaster to take the police, the local authorities and Football Association to task. After twenty years this finally resulted in an overturning the coroners' original verdict of "accidental death", see: http://hpanwo-voice.blogspot.co.uk/2012/10/hillsborough-cover-up.html. Since I wrote that background article there has been another development. http://www.bbc.co.uk/news/uk-england-merseyside-28543345. This new revelation from PC Trevor Bichard indicates that the police and stadium management were criminally negligent on that day; not only that, but they attempted to hush up their own debacle. Who did tell Bichard to lie? We deserve to know. This is only one of many "conspiracy theories proven true!" that have occurred in the last couple of years. Another good example is the exposure of Jimmy Savile, see: http://hpanwo-hpwa.blogspot.co.uk/2014/06/jimmy-saviles-hospital-crimes.html. Is this is a part of the 2012 effect? I know many people who are what I call "2012 casualties", those whose hopes were very high for some major and unmistakable upliftment on the very day of , and were so bitterly disappointed when nothing happened that they've basically given up... Well maybe something did happen. Don't give up!
See here for background: http://hpanwo-radio.blogspot.co.uk/2014/02/programme-78-podcast-2012-redux.html.
Posted by Ben Emlyn-Jones at 19:12

Thank you for keeping this important issue and disgusting cover up in the public awareness. If this had of been a disaster at a Hertfordshire polo club there would have been a completely different story, it is abhorent that they blamed the fan's that consisted of Fathers with their children, brothers and sons blaming the fans because they were a gathering of 'working class' folk. You are right, something has shifted, a paradigm if you will, although I believe that it will be a two sided coin of those becoming more and more self-externally ignorant, on the flip side there is an important undercurrent of aware people who will secure great empowerment through perceived negative events. Cheers

Thanks, X. You're totally right. There is an element of snobbishness with Hillsborough. Sadly the ruling elite have never changed how they really feel about the "common people".