Fluoride and the Pineal 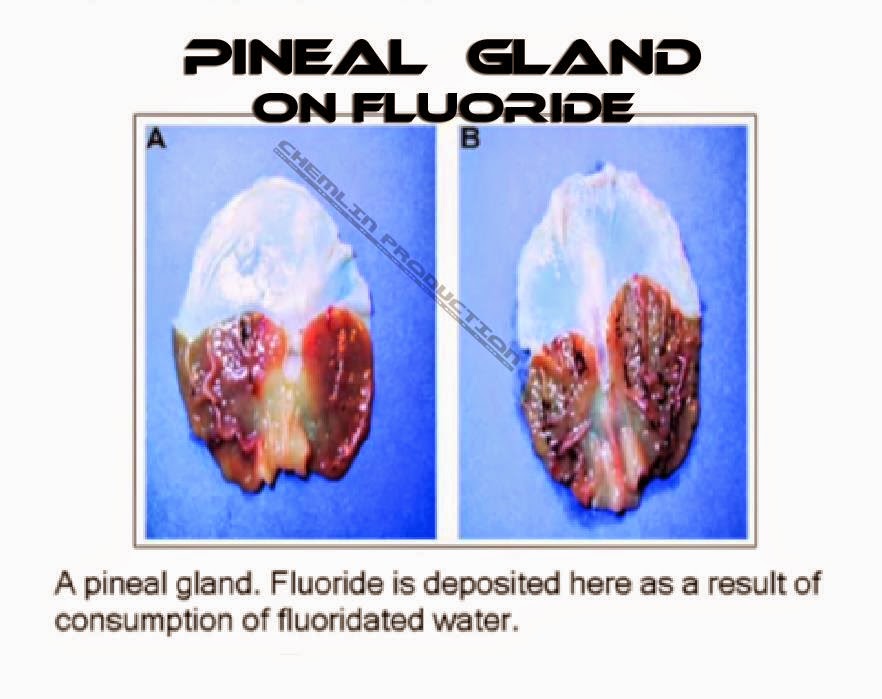 The pineal gland is one of the most interesting parts of the human body. You've probably never seen yours, unless you've had a brain scan and been allowed to examine it yourself, but you do have one. Almost all species in the vertebrate subphylum do- that's fish, sharks, reptiles, birds and mammals. It is very small, about the size of a grain of rice, and is located deep in the centre of the brain, but it seems to be crucial to bodily health. It's shaped like a pine cone, hence its name, and is unique in brain structures due to its placement on the midline and not being one of a left and right pair. It produces the hormone melatonin which is responsible for regulating human sleeping patterns and also changes in our body over the turning of the seasons. I know from my experience of working night shifts as a hospital porter that no matter how well I slept during the day I'd still be effected by drowsiness whilst on duty; this is because despite my roster allocation, my pineal gland was busy pouring out the usual night time dose of melatonin, telling my endocrine system that I really should be in bed. The 17th century French philosopher Rene Descartes claimed that the pineal gland was the "principle seat of the soul"- where the spiritual and material aspects of human consciousness interact, in the dualist school. This is known as the "third eye" in oriental mysticism, connected to psychic powers and connections with the gods. No scientific research was done into this theory until the 1990's when Dr Rick Strassman carried out the first legal research involving psychedelic drugs for almost twenty years, see: https://www.youtube.com/watch?v=8-9AHa9YXmM. His conclusion was that, along with melatonin, the pineal gland also produced N, N-Dimethyltryptamine or "DMT", a powerful psychotropic chemical. This can be taken as a drug in many different preparations, but it was not thought to be produced naturally by the body before Strassman's work. This means that the body has its own means of generating spiritual and mind-expanding experiences. However because of the moratorium on psychedelic investigation, this research is several decades behind where it should be today. Before Dr Strassman, the last scientist to carry out such experiments with human participants was Prof. Stanislav Grof in the early 1970's, see: https://www.youtube.com/watch?v=mEdxrHud5tE.

The reason for the taboo over psychedelic research is that it's a spin-off from the criminalization of LSD, along with many other associated substances, across the world over the course of the 1960's. Political leaders decided that such drugs were harmful, unhealthy and did damage to the human mind and, as a result, human society. However this was a very controversial decision and it remains so to this day. Many of those who have experienced LSD report that is has extremely beneficial effects, aiding creativity and spirituality as well as general lightness of being. As always, there are misadventures too in which those who have taken the drug recklessly suffer physical and psychological injury as a result, but many think that these negative stories have grabbed far more than their fair share of the headlines, see: https://www.youtube.com/watch?v=7D0BeLz5blM. I find the authorities' attitude towards narcotics very confusing and contradictory. For instance, there are two drugs that are perfectly legal and are very widely available and accessible- alcoholic beverages and tobacco products. The government has no problem with the endemic use of these substances even though they are the cause of enormous medical and social problems; cancer, heart disease, road traffic accidents, addiction, violence etc etc. Naturally these substances are easy to tax and I'm sure that's an incentive on one level, but could there be a deeper motive? I've recently been wondering if the secrets our rulers keep from us extend beyond the other subjects I've spoken of regularly- UFO's, free energy, 9/11 etc, into other areas of knowledge. People who are spiritually aware and have had psychedelic experiences are often far less deferential to authority than those who haven't. They also tend to live a more independent and less conformist lifestyle. What's more the government seem to like their people to be demoralized and despondent, the states of mind spiritual experiences can break us out of. I discuss this in more detail towards the end of my recent lecture at the paranormal group, see: http://hpanwo-tv.blogspot.co.uk/2014/08/ben-emlyn-jones-at-high-wycombe.html. So it makes sense from their point of view that they'd fear LSD and the changes it could bring to their relationship with their people. Today there are increasing moves to medicate drinking water with fluoride. Beginning in the 1940's this contentious practice has spread; more and more water suppliers are adding fluoride under the pretext that it increases dental health and reduces tooth decay. However I strongly suspect that the real reason the authorities are doing it is that it has significant effects on the human mind. It is apparently increases docility and suggestibility, making people easier to govern; they'd be less likely to revolt and more likely to collaborate. Also fluoride does something else that brings us back to the work of Dr Strassman; it damages the pineal gland. 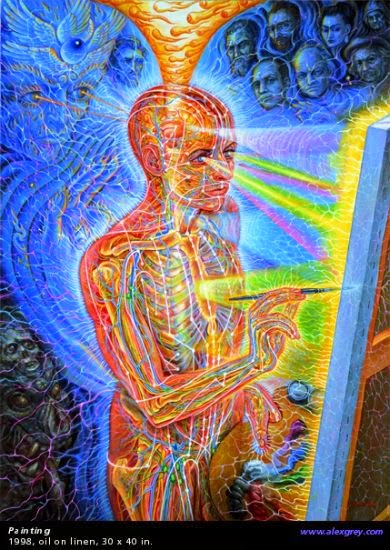 The pineal gland is very often afflicted over time by a condition called corporea arenacea- a Latin term that literally means "body sand", in which calcium deposits build up inside it. It is so common that it is considered normal and the process increases slowly as people age, although it has been observed in people as young as seventeen. Even though the pineal is deep inside the brain the progress of corporea arenacea can be observed because the organ shows up better on X-rays as the calcium calluses thicken and solidify. The activity of the pineal is inhibited over time as the deposits build up and in the 1990's Jennifer Luke, a British scientist, discovered that fluoride has been found in the pathology reports of corporea arenacea sufferers when previously the deposits were mostly calcium and phosphorus. Experiments on animals showed that this new fluoridated form of corporea arenacea greatly reduced the pineal gland's normal function; melatonin levels became unstable and this led to sleeping disorders and many other problems. It seemed that the pineal is more vulnerable to fluoride than any other part of the body; this fact is not recognized by current government health and safety tests being done related to water fluoridation, nor its use as an ingredient in toothpaste, see: http://fluoridealert.org/issues/health/pineal-gland/. Could the governments' drive to add fluoride in our water be connected to their dread of universal psychedelic awareness because of Dr Strassman's discovery? Maybe. Either way, it's another good reason to campaign against fluoride in drinking water.
Posted by Ben Emlyn-Jones at 17:53

Thanks, Hilary. That's good thinking. My girlfriend has a distiller.

Good post Ben. It is not always affordable to purchase the operatus to distill water effectively of it's chloride, indeed, special U.V conduits are the only sure way to remove flouride. Having said this there occurs in natural substances de-calcifying properties especially oregano oil and tamarind also. Although I believe that Consciousness is not the final gate being ambivilent in nature, viz. on one hand deluding and on the other leading us to the door of non dual reality it is however our birthright to navigate its interplay according to our karmic ties in the human realm and the fact that this may be engineered to subdue this free will and to deliberately attempt to keep us operating on restricted frequency is disturbing though we do have the tools to fight back. Clarity all.........

Cheers, X. I know that there are alternatives to distilling, and indeed that distilling itself may not be the most health option and could even be harmful. I do not distill my own water, although if my area's water provider did fluoridate, I would. As it happens neither Sue nor myself live in such an area yet. But Sue is "getting her defence in first!"

Great post thanks Ben I think it might be worth noting that many "anti-depressants" are flouride based and have a simlar effect. I am trying to decalcify by using a water filter in the main which is not that expensive (about £50) and easy to install if you can manage a couple of easy fit pipe connectors. So far so good and as Bill Hicks said Life is just a ride !!!