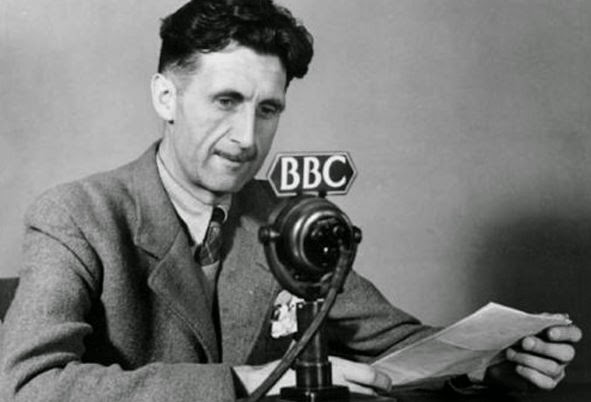 The journalist Will Self has written an article in BBC News Magazine about George Orwell, the great writer, political pundit, social commentator and activist, see: http://www.bbc.co.uk/news/magazine-28971276. Self sees English culture as one which exalts those who are extraordinarily ordinary and he suggests that Orwell is a prime example of an English mediocre hero. I don't think in this entire article he completely explains what this kind of extraordinary ordinariness is, an apparent paradox, let alone how he can apply it to Orwell. The bulk of Self's criticism of Orwell would appear to be his use of language on a technical level. English is a very remarkable language. It has a highly illogical grammar which contains a lot of idioms- structures which have emerged on their own and can't be categorized into any linguistic rulebook. For example if I ask the idiomatic question: Are you up for it? I actually mean "Do you want to do it?" However, by changing just one word I create the sentence: Are you up to it? This means something entirely different: "Are you able to do it?" English also has an enormous vocabulary, over half a million words; this is because it has lots of synonyms- multiple words which have similar or identical meanings. This is because hundreds of foreign languages have influenced the English lexicon, especially French, but also others imported into English through the . For example the word "dead" has many synonyms: deceased, departed, lifeless etc. Self notes that George Orwell has a habit of favouring words of Old English descent; these tend to be shorter, mostly single syllable, and generally regarded as simpler and less formal. He's not the only one who feels this way, see: http://www.plainenglish.co.uk/. This was a conscious style policy for Orwell; he deliberately tried to avoid the Normanisms, Dog Latin and pseudo-French which one often sees in the prose of academic scholars. Self sees this as an ironic betrayal, considering that Orwell himself raved against top-down linguistic manipulation, "Newspeak". I'm a writer myself and I really don't share Orwell's views; I enjoy the exotic taste of little-used and subtle expressions. I like neologisms too- words like selfie and twerk. I enjoy changes in language that evolve naturally from the minds of ordinary people in that great verbal common law of grass roots discussion. I'm opposed only to artificial changes imposed by authority for strategic ends, like political correctness. However I passionately dispute Will Self's opinion that this makes Orwell's writing in any way mediocre. Self's problem here is that he's missed the wood for the trees. Any technical creativity Orwell might have disregarded in favour of conformity is more than mitigated by his genius for explanation and communication via storyline, character, symbolism, satire, metaphor and contemplation; in this way he is far from mediocre. Later on in the article Self comes close to admitting that with these words: It was Orwell's own particular genius to possess a prose style that stated a small number of things with painful clarity. Moreover it's a style that along with its manifest virtues has a hidden, almost hypnotic one. Reading Orwell at his most lucid you can have the distinct impression he's saying these things, in precisely this way, because he knows that you - and you alone - are exactly the sort of person who's sufficiently intelligent to comprehend the very essence of what he's trying to communicate. So what is Self complaining about then? I fail to see the point of his article. George Orwell had the ability to expose fundamental revelations in the world of politics, society and humanity with a skill that any other author must envy. For me, Orwell was the ultimate prophet for the modern age and he expressed his portents with perfection. Whether this is because he knew about future plans from his membership of the Fabian Society, or whether he simply had incredible foresight and perspective, I don't know. Either way, if I ever want to recommend to anybody a fictional allegory for the world around us, I always tell them to go read Orwell. So what if he didn't indulge himself in pretentious godwottery; who cares?
Posted by Ben Emlyn-Jones at 15:44

I've been expecting an Orwell backlash for some time now. Will Self's contractual contrarianism probably won't trigger that, but I anticipate its happening. I'm always suspicious of those BBC 'features', they seem carefully planted to me.

Wouldn't be the first time, Marcel.

The very next day we get an article on 'Project Hieroglyph'.

Damn Orwell, damn future Orwells - Get out of our way!

LOL, they should be asking the question WHY authors have these dark visions of the future.