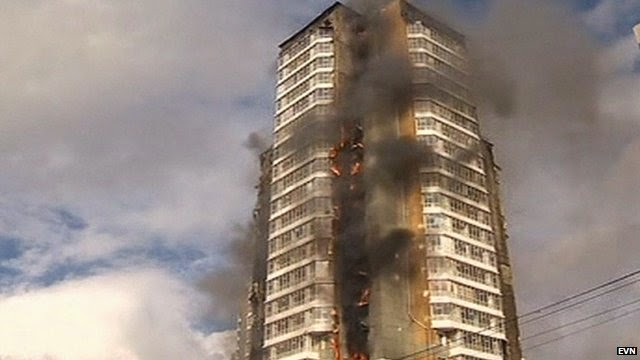 A high-rise residential building at in has been struck by a major fire that has spread through a large part of the building. All one hundred and fifteen of the tower block's residents had to be evacuated; luckily none of them were hurt. See: http://www.bbc.co.uk/news/world-europe-29300687. More than seventy firemen with the help of a helicopter and a hundred emergency vehicles were involved in tackling the blaze and bringing it under control. Latest local media reports indicate that the fire is now extinguished and there is going to be a governmental inquiry into fire safety in Russian buildings, see: http://siberiantimes.com/other/others/news/shocking-blaze-rips-through-25-floor-apartment-block-in-krasnoyarsk/. When a high-rise structure catches fire it creates a particularly dramatic scene; this was what inspired the famous 1974 disaster movie The Towering Inferno, see: http://www.imdb.com/title/tt0072308/. This film used to be shown regularly on TV, but I've not seen it scheduled for quite a while... for some reason. There are real occasions that this has happened like with the in that blazed for over twenty-four hours; it partially collapsed and later had to be demolished. The Olimp Hotel in suffered the same fate. The block in had to have four of its top floors removed due to a huge fire that broke out in it, but it did not collapse. In fact there is only one building on Earth which has ever suffered total structural failure purely due to the effects of fire, and it was WTC 7- the Salomon Brothers Building in New York on the 11th of September 2001. It fell supposedly due to damage from fire triggered by the impact of debris from WTC 1 and 2. It fell completely and instantly, in a single stage, from being one of 's tallest and most impressive buildings into a pile of rubble... nay dust!... in less than seven seconds. This is despite the fact that the fires inside WTC 7 were not as severe as those in the Russian one, nor any of the other past incidents I've mentioned. Buildings that are damaged by physical shock, for example during an earthquake, can fall down, but not in the way WTC 7 did; they tilt and wobble and bits of them break off until the whole structure is destroyed. There is no natural or artificial force in the public domain that can turn a 610 foot tall skyscraper into a pile of powder. However I think there is a weapon developed in secret that can do this, see: http://vimeo.com/104805235.
Posted by Ben Emlyn-Jones at 14:44

Dear Ben. Thank you very much for the post and especially the link to the Dr Judy Wood vimeo video, very intersting indeed. Hope all is well. 'X'

You're welcome, X :-) Yes, Dr JW is such an important figure. I'm OK thanks. Hope you are too.