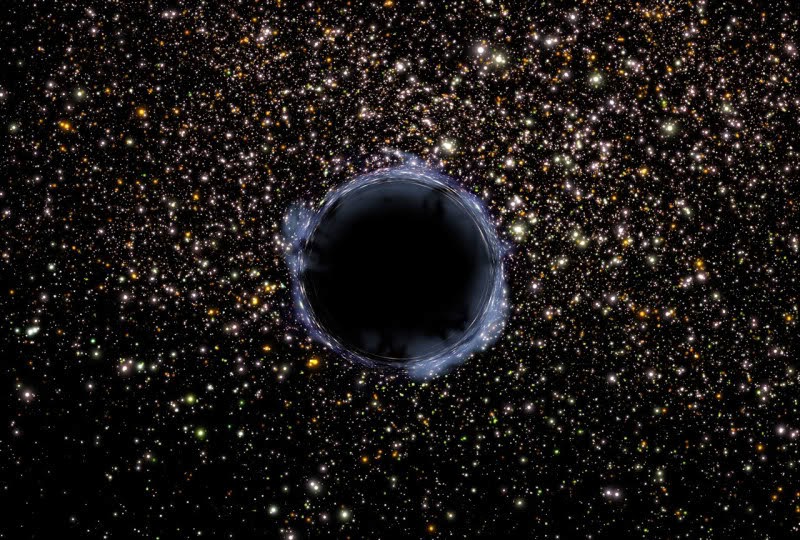 That wheelchair-bound Cassandra, Stephen Hawking, has yet again foretold the end of the world; in fact this time it's not only the world that's on the block, but the entire universe. In the foreword to a new book by the astronomer and rock star Brian May, Prof. Hawking writes about a new and unsettling discovery to do with the Higgs Boson, the so-called "God particle". The research done into the Higgs Boson has revealed that the cosmos is in an unstable equilibrium, a bit like a pencil balanced on its point, and that if one of them lost that balance it would instantly topple down into a new energy level; this could happen, theoretically, if the particle were subjected to a powerful nuclear force. Unfortunately, because the energy level of the Higgs is one of the foundation stones of the universe's physical structure, this would cause a chain reaction that would spread to all the other particle and it could end up in "vacuum decay". A huge bubble of void would immediately form around the location of the first Higgs Boson to collapse and this bubble would expand outwards at the speed of light until the entire universe was engulfed. This catastrophe to end all catastrophes could happen at any time, anywhere, we could do absolutely nothing to stop it, and we would have no advanced warning of the edge of the bubble approaching the Earth, see: http://www.express.co.uk/news/nature/508102/End-of-the-world-Stephen-Hawking-God-particle-Higgs-boson-destroy-universe. There's a newly diagnosed psychological condition called "Cosmophobia", the irrational fear that the universe is dangerous and will destroy you. It's not irrational at all, there are many natural forces in outer space that could kill all life on Earth and crush the entire planet with the ease and impunity of a boot on a beetle- comets, supernovae, gamma ray bursts, solar flares etc. But should we really be concerned? Well, yes and no.

All this inevitably leads me to consider what I've said before about the Large Hadron Collider at CERN in , see background links at the bottom. Since it was first designed and built in the 1980's questions have been raised concerning its safety. The nuclear physicist Walter L Wagner has been speaking out about the supposed dangers of particle accelerators for many years. He believes that the high energy collisions of protons will inevitably produce mini black holes which could coalesce into a full size black hole that would engulf the Earth; Alternatively the collisions could produce "strangelets", a different kind of matter that has the power to convert normal matter it comes into contact with into a copy of itself; thus starting a downward spiral that could result in the Earth mutating into a "strange star", see: http://www.lhcdefense.org/. CERN denies all this and its defenders naturally include another rock star-scientist, that smiling Simeon of the small screen, Prof. Brian Cox, see: https://www.youtube.com/watch?v=shGI-kpnMgY. I believe that Cox is being groomed to play a completely new and unique role in the media, see: http://hpanwo-voice.blogspot.co.uk/2013/09/prof-brian-cox-watch-this-space.html. If the LHC is indeed dangerous then could it be possible that there are people behind the creation of it, and other particle accelerators, who know this and are still building them? If so why? Do they not care, or is it possible that they want to destroy the Earth? In the background articles below I pose the possibility that there are elements of the Illuminati that know that they've lost the battle to build the New World Order. They are acutely aware that free humanity is going to prevent them completing their "Great Work of Ages" and the "sheeple" that they've looked down upon with such contempt for millennia are going to defeat them. The spiritual energies in the world and rising conspiratorial awareness are going to make their goal unattainable. Because of the extremely arrogant and spiteful mindset of these entities I can well imagine that at some point they might decide to pull what I call a "Götterdammerung manoeuvre"; this is a kind of dog-in-the-manger, scorched earth policy, writ large. If they know that they can't have the Earth then they'll drag it down with them into Hades rather than let free people have it. How do I know this? I don't for sure, but I know the reptilian consciousness, I've heard how a crocodile cornered by others with its captured prey will toss it away into a river to be lost to them all, because it knows that its rivals are about to steal it. Also CERN has a very unusual statue in its forecourt, that of the Hindu God Shiva; isn't that a bit of an odd emblem to put outside a scientific institution, see background links below? As for the dangers of destabilizing the Higgs Boson, could the LHC, and its proposed follow up colliders, the Very Large Hadron Collider and the High Luminosity Large Hadron Collider, be a doomsday weapon, a detonator to trigger the unbalancing the Higgs and begin the vacuum decay? Stephen Hawking says that to do this artificially would require a proton beam with the power of a hundred billion giga electron volts- GeV. The LHC at full throttle can yield 14 GeV. Hawking says that a collider big enough would need to be over the size of the Earth and he quips that "such a project would not be funded in the present economic climate". But could the Illuminati be constructing such a massive instrument on another planet, maybe below the clouds of Jupiter, or in space near a star light-years away? If so, what can we do about it? Well I don't want to give you sleepless nights, dear HPANWO-readers. Like Gandalf from Lord of the Rings, I believe there are forces for good as well as evil at work in this world. I know there's no such thing as a messiah to sit around waiting for and that we humans are masters of our own destiny; it is up to ourselves to create a better world. Nevertheless, if there is some horrible atrocity awaiting us that is beyond our control, somebody will step in and lend a hand. Indeed, could this by why the LHC suffered from mysterious technical problems a few years ago?
See here for background: http://hpanwo-voice.blogspot.co.uk/2012/07/higgs-boson-and-lhc.html.
And: http://hpanwo-voice.blogspot.co.uk/2008/09/large-hadron-collider-starts.html.
And: http://hpanwo.blogspot.co.uk/2008/03/large-hadron-collider.html.
Posted by Ben Emlyn-Jones at 06:47