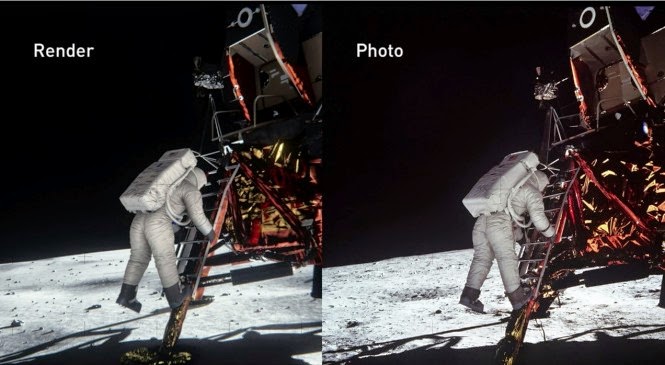 The electronics company Nvidia have recently become well-known for their dabbling into esoteric matters, in fact they launched a viral marketing campaign for their Tegra K1 mobile chip with a crop circle, see: http://hpanwo-voice.blogspot.co.uk/2014/01/crop-circle-in-california.html. Maybe this wheeze piqued their interest and they began exploring other related subjects, which maybe is what led them to their latest venture- an attempt to debunk the "moon hoax theory". That term actually covers a wide range of theories from the notion that no human being from Earth has ever travelled beyond low Earth orbit by any means whatsoever, to speculation about the secret space programme and how the massive public relations operation surrounding NASA, the Soviet Union and the space race influenced the way we the people were told about man's exploration of the heavens. Most sceptics- with a c, of the Apollo missions fall into the first camp, that no man has ever walked on the moon and that the moon landing footage and other data were faked, filmed secretly in a film studio on Earth somewhere. I'm more a supporter of the second camp, even though I agree that the photos and TV record were faked. I personally don't doubt that men have walked on the moon, in fact I expect humans from Earth have been going there for a long time and they still travel there regularly today, and much further afield too for that matter. What I question is whether the moon was first explored at the time, and using the methods and personnel, that history tells us it was.

This moon landing project by Nvidia is essentially another marketing campaign. They've analyzed one of the first and most famous photographs allegedly taken on the moon using their new Maxwell hardware and Voxel Global Illumination system which is very good at creating realistic lighting effects for computer generated graphics. Graphics designers at Nvidia have fashioned a virtual reproduction of the photograph of Buzz Aldrin climbing down the ladder from the Apollo 11 Lunar Module to step onto the surface of the moon. This had to factor in the geography of the location, the materials and properties of the hull of the spacecraft, the astronauts' space suits and the various pieces of equipment in the scene. The designers also had to recreate the lighting effects. They then rendered what they claim is an electronic facsimile of the photograph, their point being that it explains all the lighting effects that we "conspiracy theorists" say is artificial studio lighting from multiple angles, as nothing more than sunlight, therefore the original 1969 photo must be real, see: https://www.youtube.com/watch?v=O9y_AVYMEUs. It took them a while though; at first the picture still wasn't correctly lit even taking into account their estimates of the light reflection off the surrounding moonscape. It then struck them that they'd failed to take into account the sunlight shining off the photographer Neil Armstrong's white spacesuit. After that had been added to the render it looked exactly like the original Apollo 11 photo. However, there are some problems with that bold statement. The facsimile does not look exactly like the photo. To begin with, Nvidia haven't reproduced the lighting effects around the porch of the LM. The reason for this could be because these effects are extremely incriminating. You can clearly see the sharp line of a shadow on the roof of the porch indicating a major nearby light source behind and to the left. They also haven't addressed the work of Dr David Groves and his detection of another light directly to the right of the photographer, see: http://www.aulis.com/nasa4.htm. The presence of a secondary light source is even more apparent in other images taken at the same scene, not least Buzz Aldrin climbing out of the LM cabin in which Neil Armstrong is standing at the base of the LM ladder where he is in the shade himself and so cannot be nominated as the human reflector board for the Nvidia facsimile as the graphic design team claim. In fact even if he were standing in the sun his relative size in relation to the photographic object would not have reflected enough light to produce the right effect. This point was not lost on moon hoax researcher Jarrah White, as well as many others. He's produced a new video tackling Nvidia's answer to what many are calling "the crazy lunar conspiracy believers", which includes me of course, see: https://www.youtube.com/watch?v=lIFBz2t3Ov0. In this video Jarrah points out that Nvidia have not accurately gauged the albedo, the proportion of sunlight reflected by the lunar surface. Many people, including Jarrah himself, have attempted to recreate this photographic scene physically, using a surface with the same albedo as the moon's, and they cannot copy the lighting effects we see in the photo. Nor can the two Russians who repeated the initially very misleading experiment done by the TV series Mythbusters; I've criticized that programme myself, see background links below. It looks like Mythbusters made the same error as Nvidia, albeit not in the Photoshop world, misjudging exactly how little light is reflected by the moon's surface. Of course the moon appears very reflective to us on Earth, it looks very bright indeed when full in a night sky, but its average albedo is only 7 to 12 %. Apollo 11 also landed on one of the maria regions of the moon which are the dark patches on the lunar disk that you can see from Earth with the naked eye, so the albedo of the area around the landing site would probably be below that lunar average. The recent missions to the moon by support that, although Jarrah claims that the Chinese space agency has been tampering with its visual images too, maybe to boost NASA's official story of Apollo. The older Soviet moon missions, which predate Apollo, seem to have more realistic photographic effects. What Nvidia has done is not only fail to dispel some people's very appropriate, sensible and rational concerns about the Apollo moon landings, but they've reignited the entire dispute for an entire new generation. It's a trick that has backfired badly, even if it does boost sales of the Maxwell and VXGI system.
See here for Mary Bennett's article on Nvidia: http://www.aulis.com/nvidia.htm.
See here for background: http://hpanwo.blogspot.co.uk/2014/03/megan-whewell-at-oxford-sitp.html.
And: http://hpanwo-voice.blogspot.co.uk/2012/10/moon-landing-sites-protected.html.
And: http://hpanwo-voice.blogspot.co.uk/2012/07/marcus-allen-at-bis-update.html.
And: http://hpanwo-voice.blogspot.co.uk/2013/12/moonfaker-channel-deleted.html.
Posted by Ben Emlyn-Jones at 15:40

Thanks for this post re Apollo Ben. Thanks also for a great HPANWO radio show tonight!
Always useful and good to revisit this topic. It is pivotal.
For me, the fundamental problems are the facts that the moon has 1) little-to-no atmosphere and 2) it lies beyond the Van Allen belts.
The Van Allen belts provide the earth, and therefore humans, protection from the harmful radiation from outer space. (X-ray, cosmic, gamma, you name it). Any human astronaut on the moon in a flimsy canvas suit would be toast. Any photographic film would also be toast. In addition, we have the problem of the surface temperature of the moon in sunlight. No. For me, you can forget any notion of the official Apollo programme at all, let alone the 'official' photographs. Marcus Allen is 100% correct in this respect.
Please see also my article http://www.checktheevidence.co.uk/cms/index.php?option=com_content&task=view&id=348&Itemid=63 which Andrew Johnson very kindly hosted.
With regard to alternative visits to the moon and elsewhere (secret space programme etc), I can accept that sufficiently sophisticated means of propulsion exist and have been witnessed on earth many times. We must therefore however also assume, in the absence of direct evidence, that any sufficiently sophisticated forms of propulsion made by man must also convey similarly sophisticated means of radiation protection for the astronauts therein. I think that all of us are to quick to accept the notion of 'hidden' space travel. Propulsion isn't the only problem. Radiation is the real obstacle that has prevented exploration of space so far.

You're welcome, Neil. Thanks for tuning in.
Great article on Andrew's site! I didn't know that about the Osmonds tape. It sounds a bit like the 9/11 hijackers passport story to me. Aldrin did claim that he took a few things to the moon, including some Soviet cosmonauts' badges of the men who'd died in the N1 explosion. But they were made of metal. You're right about radiation. Mary Bennett calls it "the biggest show-stopper in space exploration". However she doesn't agree with me about the secret space programme.

nvidia would be better off proving that rockets indeed work in the almost perfect vacuum of space first!
(sorry couldnt resist, as google will have some type of "sit on a skateboard and throw a bowling ball away from you is the answer" but if you quote newtons laws be sure to know their meaning first :P