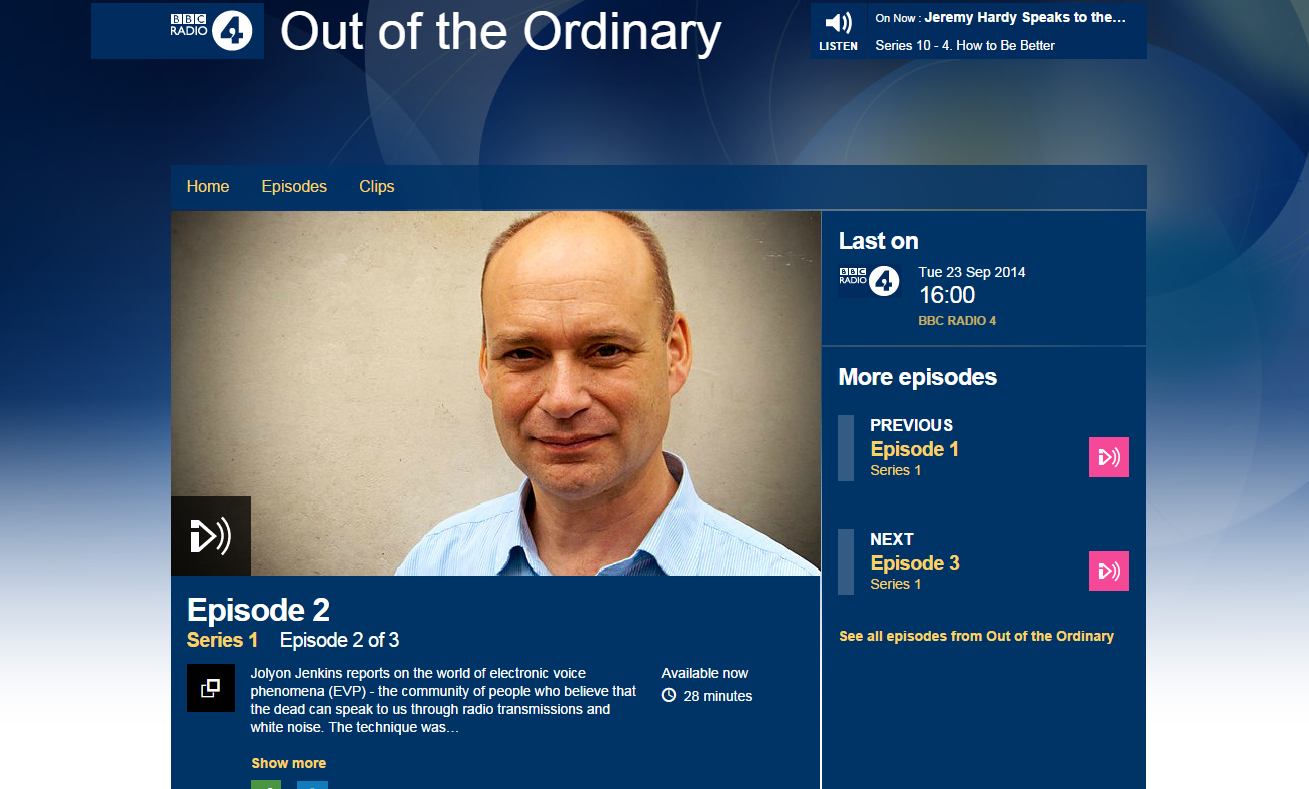 I recently listened to a BBC Radio show called Out of the Ordinary; thanks to my friend and fellow researcher Don Philips for bringing this to my attention. You can listen to it here for a limited period of time, see: http://www.bbc.co.uk/programmes/b01rg1gh. (If a more permanent recording becomes available I will post a link to it here.) It is just one episode of a long running series. I don't often do a "Disgusted- Tunbridge Wells", but I felt I had to this time:

I must say I was rather dismayed by your Radio 4 programme Out of the Ordinary (23rd Sept ). This 28 minute documentary was advertised as a "report on the world of electronic voice phenomena- EVP", yet it failed to give the listener a complete and honest profile of the subject. It focused exclusively on the weakest cases and most notorious fakes, and it addressed the criticisms of EVP research without exploring more recent and relevant counter claims.

The programme brought up the two conventional explanations for electronic voice phenomena.
1: EVP sounds are just random noise that is interpreted by the human brain as recognizable through a process called apophenia or audio pareidolia- the tendency of our senses to perceive organized patterns where there are none.
2: EVP voices actually come from radio signals that are added through interference to the recording when the microphone circuits inadvertently act as an aerial.
Just a brief amount of research into the subject of EVP will show you that many modern EVP researchers now control for the second explanation. They have placed their recorders inside a Faraday cage- a container that creates a radio vacuum inside it, and still obtain these mysterious voices; thereby ruling out explanation 2. There are even some who have recorded sounds deep underwater. Explanation 1 sounds reasonable, on the one hand, but any EVP investigator experienced in addressing the detractors of their research will know that it contains a logical fallacy. It's a question that you might think is easy to answer; a voice is obviously a voice, and white noise is obviously white noise, isn't it? Yes it is, if you have proof that what you're hearing is a voice, in that there is a known person involved whom you're positive recorded it, but what if there isn't? What evidence do you have to go on if you come across what sounds distinctly like a voice, but it is totally anonymous? If you decide that it is indeed a person speaking then how do you make that judgement? If you think about it, the answer must be somehow to quantify the resemblance the sound has to the real human voice that it supposedly represents. To use a visual analogy: if you came across what looked like a painting of Mother Teresa on a wall, and it was totally anonymous, then you'd have to ask yourself how closely the painted image resembles the real Mother Teresa. To do that scientifically you'd have to invent a practical mechanism with some kind of scale. Once that was designed there would have to be a discussion about what "level of closeness" would become the universally agreed cut-off point between what was to be considered a random pattern and an artificial image. This so far has never been done and therefore pareidolia, audio or otherwise, or apophenia, has become something of a trump card for skeptics, an unfalsifiable wreaking ball they can deploy at will. After all, if I wanted to be a truly obsessive curmudgeon I could claim that the Sistine Chapel frescoes are just random patterns. Michelangelo just got in a temper one day and kicked some cans of paint around the room; what resulted is a completely haphazard splash of flying paint drops and if you see any recognizable shapes there of cherubs, naked angels and hands of God, then I'm afraid it's just your brain interpreting those splashes as organized imagery when there is none in fact there. If you think what I've said is ridiculous then you need to enter into this discussion to define exactly where we draw the line between the random and the intentional, otherwise I'm entitled to use that argument as heedlessly as skeptics do. One man, Mark J Carlotto, has attempted to clear the question up by writing some computer software that "measures artificiality", but this is not a task to be undertaken by any one individual; there has to be a consensus formed so that any future discoveries of this nature can be calculated precisely and the studies can then skip over that tedious hurdle. What applies to the visual sense applies to EVP too. It is very important when it comes to analyzing evidence collected for the electronic voice phenomenon; when is what sounds like a voice a real voice, and when is it just us mistaking white noise for a voice? You see, if I wanted to I could claim that your radio show was just random noise that my brain interpreted as the programme Out of the Ordinary, and I'm currently writing in to the BBC to complain about a delusion.

I hope in future programmes on the subject of EVP you will explore further in terms of background research and talk to some of the dedicated paranormal investigators who are very well aware of the issues you raised in Out of the Ordinary, so much so that this programme came across as very dated as well as misleading.

The problem is that complaining to the BBC is like banging your head against the wall. I've written to them 8 or 9 times now and so far I've never got a email back saying they're going to change anything.
They seem to have a set way of answering complaints that just give reasons for why they made the programme the way they did. Mostly I could tell by the email response that they'd not actually read my complaint fully.
It's really annoying and I'm sure they know it.

Hi Les. They've already sent me an auto-reply too, saying they probably won't have time to reply. But it's still worth doing just in case lots of other people have complained and so they then get email-stormed!