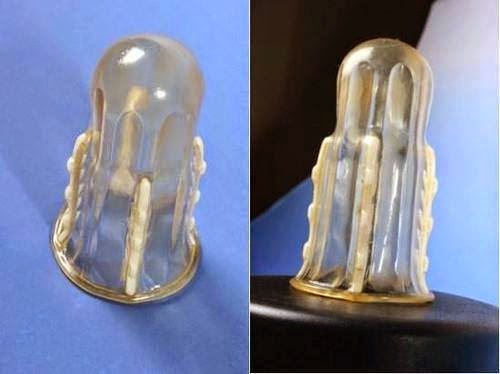 A medical technician is has invented a device called the Rape-aXe which is intended to protect women from being raped. It is a hard plastic sheath that a woman can insert into her vagina like a tampon. During sex when a man pushes his penis into her vagina he will also push it into the sheath, and that's where the fun begins. The inside of the device has barbs that tear the flesh of his penis; it's designed to cling on painfully and it cannot be removed without medical assistance, see: http://www.antirape.co.za/. A good idea you might think, "the Rape-aXe defends women from rape!" Not necessarily. The Rape-aXe is just a weapon, and like most weapons it is morally neutral. It can be used for the perfectly legitimate purpose of self-defence, or it can be used to initiate an attack, including an unprovoked attack, against a man who is doing no harm at all. However when I made this point on the social media where I discovered the Rape-aXe I was responded to with scorn and disdain. The supporters of the Rape-aXe showed no concern at all for my misgivings, and sadly some people seemed quite gleeful about them. I explained to a friend of mine, a woman I'll call "Nancy", that this meant that all men could be targeted by the Rape-aXe, including me, regardless of whether or not we personally had hurt a woman. She replied "Good! Now YOU know how it feels!" She gave a litany of the risks and adversity women have to face in life, and at the end of this she said: "But this is not about you personally, Ben. I know you're a good guy." I was dumbfounded and dismayed. was actually happy that I might be in danger, even though at the end she paradoxically admitted that I am innocent and didn't deserve to be harmed. Harmed very badly perhaps because any injury to the penis is very serious because of its high blood flow. It bleeds more than other organs and could even cause death from exsanguination. What's wrong with women protecting themselves in other ways by learning self defence or using pepper spray? I'm all in favour of the US Constitutional right to bear arms; why not let women carry guns in their handbags? How effective is the Rape-aXe as a defensive weapon compared to those others? I can't help but sense that the attraction for this device is primarily symbolic- it attacks the male genitals and so is an attack against manhood. No wonder it appeals to feminists.

It was very strange and very upsetting because I've known a long time; we live close to each other and have met on several occasions. We're good friends and she always treats me with warmth and respect... except now. Her hostility towards me comes from the abuse of women by men in society; for this reason my own abuse had to be celebrated because I am a man, and it doesn't matter whether I'm personally guilty or not. Women are being harmed by men, and this justifies her harming me, albeit just socially. I think that this is mind-control, a kind I have written about before, see: http://hpanwo-voice.blogspot.co.uk/2013/02/revenge.html. The way behaved is a perfect example. She transformed in front of my eyes with the abruptness of the killer in The Manchurian Candidate. One moment she was normal, my good buddy; and then, in an instant, there was a battle line between us and I was her sworn enemy. After a moment she snapped back to normal again. Even more alarming was that in a way I felt myself change too. I ceased to be me, as I sense my own personal identity; I became a nameless faceless man who was all men, a microcosm of half the human beings on Earth, a component in a purely political dynamic. An cipher of hatred for all women. This is how feminism has messed with our minds. Somebody very observantly called feminism "racism for the rich" and this is true because it tends to be a vice of middle class liberals. These are people who have rejected racial, religious and ethnic bigotry, yet the rhetoric of some feminists is indistinguishable from that of the Nazi's or Ku Klux Klan; you just substitute "men" for "Jews" or "blacks". Women's rights is sometimes a very reasonable and urgent cause, but I don't think modern feminism has anything to do with women's rights. Its true purpose is to mess with our heads, to generate malice and unnecessary conflict, to divide-and-rule by turning one half of humanity against the other. It engenders hatred and irrationality in women; and also guilt self-hatred and thoughtcrime among men. I've lost friends before for saying that and I'll probably lose a few more now, see: http://hpanwo-voice.blogspot.co.uk/2014/05/a-friend-to-all.html. But there is hope, the female conscience is growing and a new group called Women Against Feminism has been founded, see: http://hpanwo-voice.blogspot.co.uk/2014/07/women-against-feminism.html.
Posted by Ben Emlyn-Jones at 17:00

I can't imagine many feminists will approve of this product. I find that they're generally indiginant to any suggestion that they take responsibility for their own paranoia. "We shouldn't have to!" they cry. Well don't then — but don't expect anyone else to.

It definitely won't be sold in Boots anyway.

I'm not sure, Marcel. Feminists are full of double-standards and contradictions. As for Boots, I'd picket the place if they ever sold it!

Feminism becomes redundant if the feminist cannot participate as victim. A major high street chain selling the product is quite different from an obscure online retailer. Any loyal feminist would ask themself the question "how can I spin this in a way that asserts my status as victim?"

I wouldn't be surprised if you were joined at this hypothetical picket by the same bloodthirsty women who originally embraced the product!

Firstly, I imagine it all pulls out so they're not locked together. My point is this... the man, rapist or not, is now in pain and greatly pissed off. The woman could very well be in more danger now than before. This company is selling an item designed to inflict damage. It's not self defence, it's instant punishment, rape or not. How long before some sick tramp decides to have a laugh at some guys expense on a night out. I wonder how a similar reversed product would be viewed. - Good points Ben!