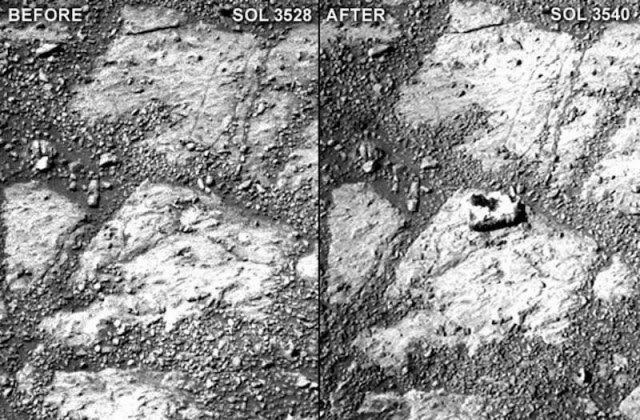 Dr Rhawn Joseph is neurologist from , but also a very open-minded and observant researcher into many esoteric subjects, see: http://cosmology.com/. He's a keen student of panspermia, the theory that life and organic material can travel through space by natural means; this has been researched in depth by Prof. Chandra Wickramasinghe, see: http://hpanwo-tv.blogspot.co.uk/2013/09/exopolitics-2013-astrobiology.html. Many times now spacecraft visiting other planets have spotted strange phenomena that could indicate the presence of life, or even of intelligent life on Mars in the distant past; the Face on Mars is the best example of this, see: http://hpanwo.blogspot.co.uk/2007/08/face-on-mars.html. It was spotted by NASA's Viking spacecraft in 1976, but since then numerous other anomalies have been discovered. The most recent is what's become known as the "jelly doughnut", so called because of its shape, that it looks like a rough white bowl or torus with a red interior. It's an object that has been officially labelled a "rock" that was photographed lying on the ground by the Opportunity Rover on January the 8th; however a photograph of the same spot on December the 28th showed nothing there. Rhawn Joseph thinks the object resembles an Apothecia fungus which is a common species on Earth; could something similar have evolved on Mars? The mission director Steve Squyres says that the object is probably from part of a nearby pile of stones that was dislodged by the vehicle's wheels. I wonder if they'll image that spot again in another few days to see if the "rock" is still there. Dr Joseph is not waiting for them; he believes that the answer given by NASA is so unsatisfactory that he's launched a lawsuit against the agency and its director Charles Bolden. He hopes to force NASA to reinvestigate this, the possibility of life on Mars; after all the professed purpose of these space missions, with all the taxpayer's money spent on them, is to "look for signs of life". Incidentally, I'm also intrigued by how the ground underneath the object resembles very old paving.

The question is, if NASA has gone to so much effort to send spacecraft to other planets to look for evidence that Earth is not the only place in the universe with life on it, why would they be so swift to reject data that supports the presence of life on Mars? There could be several reasons, psychological, cultural and political. In 1960, at the dawn of the Space Age, the year before the first manned space flight was launched, the Brookings Institution, a "policy analysis" organization, published a report called Proposed Studies on the Implications of Peaceful Space Activities for Human Affairs. This effusively-titled document contains a chapter on the eventuality of human space missions discovering extraterrestrial life. All different kinds of hypothetical scenarioes are discussed, from discovering microbial life in meteors, something which has actually happened, to full-on encounters with advanced alien intelligences. The report did not openly recommend a cover-up, but it did say that the stability of human society might be threatened by such revelations and there were "certain circumstances" in which it might not be a good idea to shout the news from the rooftops, see: http://www.enterprisemission.com/brooking.html. If NASA's management is still governed by policy influenced by the Brookings report then this could explain the reticence and furtiveness that has so irked Dr Joseph. The depth and complexity of this issue goes beyond the Brookings report and into the realms of ET Disclosure. NASA, being the front line of the public's involvement with space, may well be under the directorship of those who are very well aware that there is an extraterrestrial intelligence out there in space... not only out there but down here on Earth with us! See: http://hpanwo-voice.blogspot.co.uk/2012/07/happy-disclosure-day.html. This secret is getting harder and harder to keep. One does not need to go as far as Mars to find such anomalies; they've been spotted hundreds of times closer, on the moon, see: http://hpanwo-voice.blogspot.co.uk/2014/01/mystery-object-spotted-on-moon.html. Dr Joseph has a major battle on his hands; he is trying to shift an immoveable object, but I hope he finds encouragement from the support we give him as well as the knowledge that the truth is an irresistible force.
Posted by Ben Emlyn-Jones at 12:02