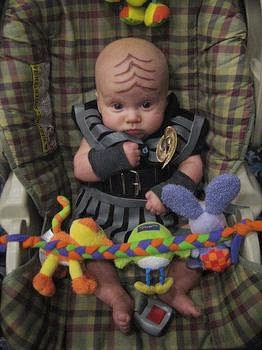 d'Armond Speers, a man from Minnesota USA, has caused outrage by bringing up his son, Alec, to speak Klingon. For the first three years of his life Speers only conversed with his son in the constructed language from the TV series Star Trek, see: http://www.todayifoundout.com/index.php/2012/08/a-man-once-tried-to-raise-his-son-as-a-native-speaker-in-klingon/. The Klingon language was designed by the actor James Doohan, who played "Scotty", with the help of linguist Dr Marc Okrand. It was introduced in the first Star Trek film, Star Trek- the Motion Picture, in 1979. This might have been a response to the criticism of the original Star Trek TV series that the Klingons, which were the programme's most commonly appearing extraterrestrial species, didn't look or sound alien enough; and the film also featured far better make-up and special effects to aid the Klingons' unearthly demeanour. Because the Klingons are an aggressive and militaristic species, initially hostile to humans and the Earth, their tongue was intended to be spoken in a raised voice and have harsh and guttural phonetics with explosive consonants and short vowels. The language originally only sported only a small lexicon and a basic semi-formed grammar that wasn't developed beyond what was necessary for its role in the script, but as the franchise continued it was expanded and refined into a complete language. Today it has numerous speakers including about thirty who are fluent and can converse to each other in it. It now serves a popular role similar to other constructed languages created for fiction like JRR Tolkien's "Elvish". Books like the Bible and William Shakespeare's play Hamlet, which features in one of the TV stories, have been translated into the "Warrior's Tongue". There is even a Klingon Language Institute, see: http://www.kli.org/. There are two writing systems, one adapted from the Latin script, that English uses, and the other is the native Klingon script which the Klingons in the programme write with.

The father of this young native Klingonophone from Minnesota claims that he is not a Trekkie and never attends Star Trek fan conventions etc; I find that very hard to believe. He said he wanted to bring his son up in this way as an "experiment". I first heard about this news story from a family friend who told me about it. He said very angrily that this was a form of child-abuse and that social services should take Alec away and put him into care. I vehemently disagreed, having been on the receiving end of attention from the "child protection" team myself. As Brian Gerrish and many other researchers have been pointing out for years, the Common Purpose-controlled authorities have an agenda to break up families and make as many children wards of the state as possible, for example see: http://www.youtube.com/watch?v=CVxouBETvcI. They will find excuses to call almost anything "child abuse" to justify snatching away children and separating them from their parents. In no way does bringing a child up to speak Klingon constitute child abuse! That was my opinion even before I found out that Dr Speers was concerned for his son's well-being when it came to integration with others; after all Alec would be at a disadvantage only being able to talk to the world's thirty-or-so fluent Klingon language experts. Therefore he made sure Alec's mother, who supported her husband in the experiment, spoke to him always in English; this would make Alec bilingual. I grew up in a bilingual community myself, Lampeter in west , and know that children have an unprecedented linguistic ability to cope easily with two languages, and even three or more. It is true that children not spoken to at all in the first five years of life, and so never get the chance to learn to speak properly themselves, inevitably grow up retarded; but Klingon is today a much richer and more complex language than it used to be since it has grown beyond the scope of the TV series. Even though the copyright for it still belongs to CBS Pictures and new words can only be added to the official dictionary with their permission, "colloquial Klingon" can be as varied as any other natural language. As it happens Alec is now a teenager and has stopped speaking Klingon altogether. The idea that Alec's parents should be considered unfit to be a mother and father for this reason is a gross insult. It's sad that so many people in our world are only too keen to cheer on the agenda to destroy the family structure, ruin the lives of the youngest and most vulnerable people in society, and enslave future generations.
Posted by Ben Emlyn-Jones at 16:28